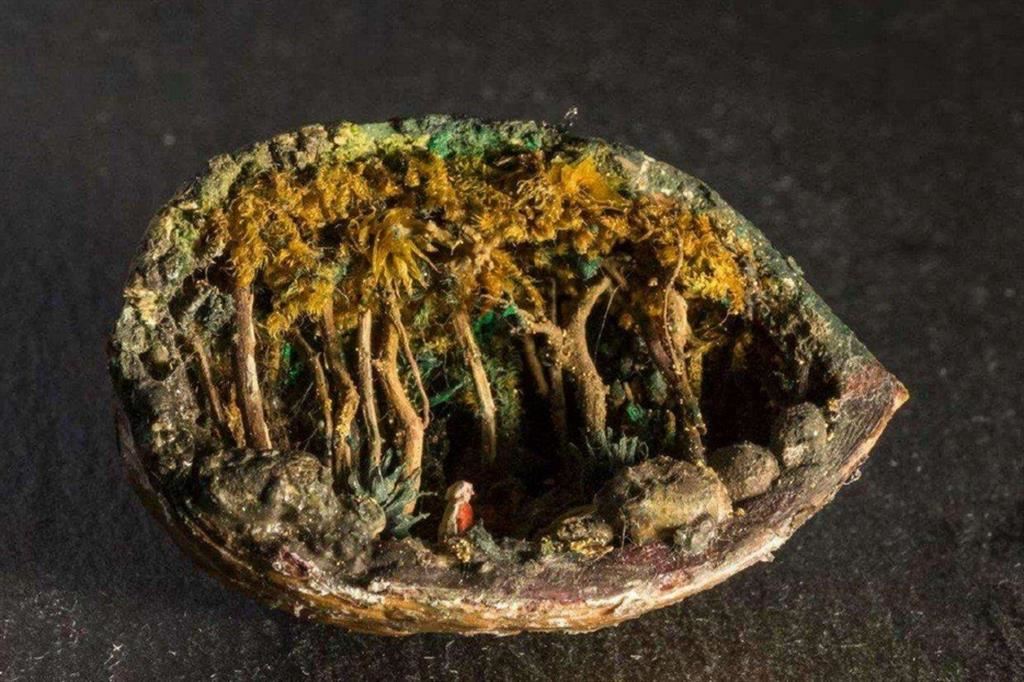 One of the Dante miniatures made by Antonio Maria Esposito – Olschki

The “Museodivino” of Naples jealously guards tiny nativity scenes and scenes from the Divine Comedy for thin filaments painted and placed in walnut shells by Don Antonio Maria Esposito (1917-2007), in a patient exercise of recollection in the minimum which is virtuosity and asceticism at the same time. With wisdom and passion Silvia Corsi Andreani had them restored and photographed and now they can be contemplated, using a powerful magnifying glass, in Naples (and for a few days also in Florence, at the Certosa del Galluzzo, from 16 November). The publisher Olschki publishes the 42 Dante scenes in the volume The Divine Comedy by Antonio Maria Esposito between miniature, sculpture and spirituality, edited by Silvia Corsi Andreani (pages XII + 200 with 176 color figures, € 50) which will be presented in Florence, Certosa del Galluzzo, Via della Certosa 1, again on November 16 at 5pm. The same publisher last year had published the cribs in a walnut accompanying the Novena of Holy Christmas by Alfonso Maria de ‘Liguori (with an introduction by José Tolentino Mendonça). Pear grains, fragments of moss, droplets of paint outline the eternal realms, human faces, tree branches, skies and oceans. Giorgio Cossu’s photographs are accompanied by acute and elegant essays, including those by Marco Collareta, and by Véronique Mattiussi.

What then can be the relevance of the “minimum”, chosen by Don Antonio Esposito to interpret the salient episodes of the poem? Apparently in this apocalyptic epos that crosses, indeed leads, the poem would seem very little. There Comedy it is in fact, as Romano Guardini wrote, “Landscape of eternity”, recapitulation of worlds, collision of giants (from Capaneo to Veglio di Creta), of heroes, empires, hatreds and extreme vengeances, such as the one invoked to submerge Pisa: «let the Capraia and the Gorgona move, / and make a hedge to the Arno up the mouth, / so that every person drowns in you! “( Inf. XXXIII, 82-84). Yet, on closer inspection, Dante – as always – surprises us, giving us a apax very precious: once and once it appears “minimal” in the Comedy and at a high and anxious point of the Paradise: «I saw more than a thousand joyful angels, / each one distinguished by brilliance and art. / I saw at their games there and their songs / laughing a beauty, which joy / was in the eyes of all the other saints; / and if I had in my mind so much deviation / as much as I imagined, I would not dare / the least attempt to delight him “( Par., XXXI, 131142, explicit). The triumph of Marycelebrated by a myriad of jubilant angels, is underlined by the poet with a magnificent gathering: “Even if I had as much expressive art as I have in imagining, yet I wouldn’t dare try my hand at even the slightest bit of delight and grace”.

“The slightest temptation of delight” is one of the most beautiful lines of the Comedy, not for the brilliance of omnipotence, but for the subdued evangelical gathering of the final meaning in everything that does not appear: a certain parable of the “mustard seed”: «To what can we compare the kingdom of God or with what parable can we describe it? It is like a mustard seed which, when sown on the ground, is the smallest of all seeds on earth; but as soon as it is sown it grows and becomes greater than all vegetables and makes branches so large that the birds of the sky can shelter in its shadow ». [Marco, IV, 30-32; Matteo 13, 31-32; Luca 13, 18-19]. But even more it is one of the most meditated and faithful exegetical revivals of Magnificat, because all the greatness and the delights of Mary are in her humility: «quia respexit humilitatem ancillæ suæ. / Ecce enim ex hoc beatam me dicent / omnes generationes, / […] / deposuit potentes de Sede / et exaltavit humiles ” (Luca, 1, 39-55). In short, the poem ends as Ambrose would have liked in his Expositio Evangelii secundum Lucam: «Humilitatem enim respicit Dominus: Quia respexit humilitatem ancillae suae. Communis ista generalisque medicine est [L’umiltà è la più generale e comune medicina] “. But it is not only Dante who collects the sense of plenitude in the “minimum”.

A great poet of the twentieth century, who would have loved – if he had known him – Don Antonio Esposito, that is Giovanni Giudicihe too knew how to collect in the minimum the same dimension of the divine, especially in the collection Light of your mysteries: «Keep us quiet Our Something / Include and protect – Our Something / Be calm in return we won’t spoil / This dark cotton wool pain // Keep our mind in check / Don’t let your breasts spasm / Bring us infinite sack infinitesimal jonah / Di whose antennas tremble waves vibrated // Spirits go and we will pray – / Ich bin eine Besonderheit des Nichts / Mein Gott / Mein Tod “( Prayer). In that distant point that we long for as our home and truth: “God with yourself reunited / In the vain point of your point // […] / Where one of us smiles and is / Your least truth “( ibid, Aspirations). In the unfinished measure to which it will never be possible to make up for, never possible to renounce: “But do not fail weak faith / His unfinished measure: / If Jesus is not risen / We are ashes and imposture” (Judges, Liturgical imperfections). “Where of us smiles and is / Your least truth”: yes, it resides in these nut shells, in the patience of the invisible yet present.

Art and spirituality. Small is beautiful and opens the heart in God