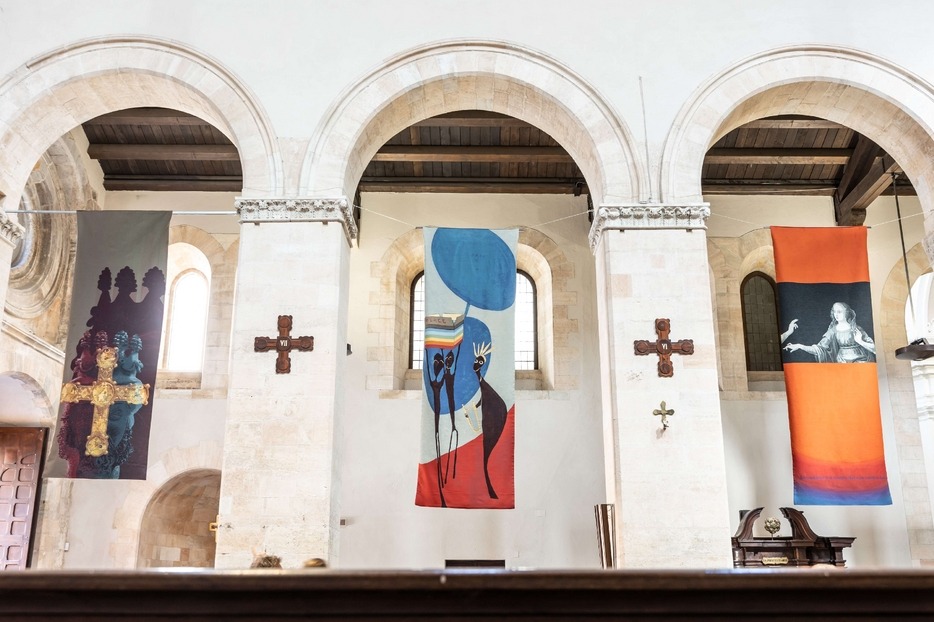 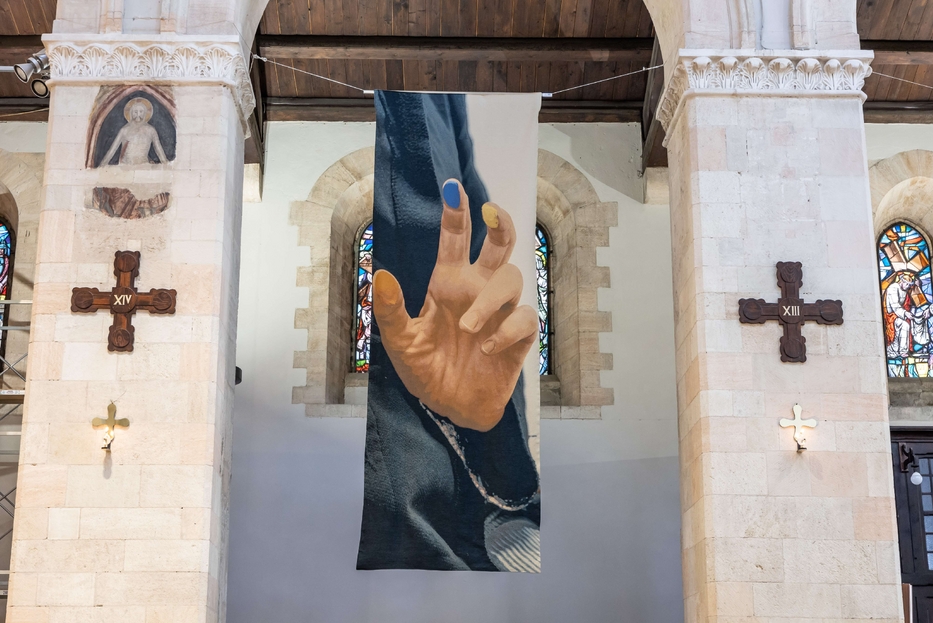 It seems difficult to overestimate the scope of the project that is unveiled to the public today in the cathedral of Cosenza. On the occasion of the celebrations of the 800th anniversary of the consecration of the cathedral, sixteen large tapestries made by artists were installed, all protagonists of the international contemporary scene. This is Stefano Arienti with Last dinner; Vanessa Beecroft with Jesus purifying the temple; Mariella Bettineschi The Visit of Mary to Elizabeth; Michele Ciacciofera David carrying the ark of the covenant; Jan Fabre with Jesus heals ten lepers on the way to Jerusalem; Giuseppe Gallo with The healing of Naaman the Syrian; Goldschmied & Chiari with The sacrifice of Melchizedek; Debora Hirsch with Solomon’s Temple Consecration Prayer; Ugo La Pietra with The construction of the Cathedral; Maurizio Orrico with The delivery of the Stauroteca; Alfredo Pirri with The consecration of the Cathedral; Michelangelo Pistoletto with The glory of Paradise Third Paradise; Luigi Presicce with Nathan’s prophecy to King David; Giuseppe Stampone with The Assumption of the Blessed Virgin Mary; Grazia Toderi with The miracle of the plague; and finally Vedovamazzei with The Annunciation.

As you will have noticed, unlike what often happens for contemporary works of art placed in churches, the themes do not concern a spirituality that is perhaps rich but without connotations, but strictly religious subjects, and not infrequently unusual: taken from the Old Testament and from the Gospels, as well as from moments of the Cosenza Church (such as the reference to the stauroteca donated by Frederick II of Swabia on the occasion of the consecration on January 30, 1222), they have as their red thread the symbolic, historical and vital nature of the cathedral founded on the strength of the liturgy . Finally, it is not a temporary exhibition but a permanent presence, as a new stage rooted in the present of an ancient history – also underlined by the tapestry technique, once usual in places of worship and today at the center of a rediscovery of contemporary creativity. . On the one hand, therefore, a Church that is linked to its tradition as a great client, on the other, the artists who accept the challenge of facing the great Christian theme for the community.

As the curator of the project Giacinto Di Pietrantonio, long-time director of the GAMeC of Bergamo and professor of Art History at the Brera Academy explains, the initiative “should be read as a response to the message addressed to artists by Paul VI on the occasion of Vatican Council II, in which he invited them to return to dialogue with the Church as it had been for millennia. More: to become friends again. Modernly this demonstrates that art, as always contemporary, can and must return on a large scale to work and dialogue in sacred places ». 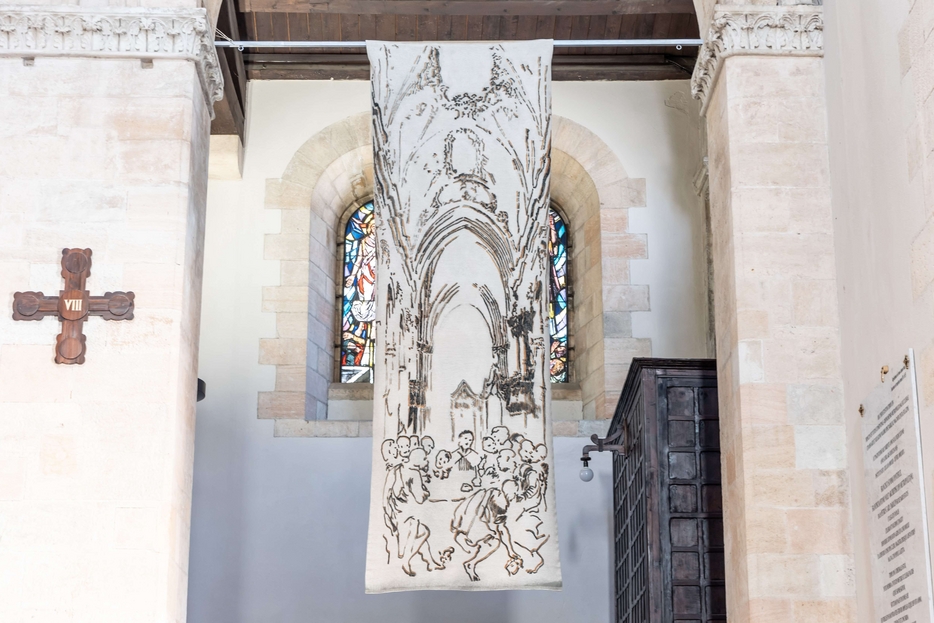 “The Church is a garden of many flowers, and we want to build this garden, beautiful and rich, to signify the beauty of our city, of our Church, of the diocese” said the archbishop of Cosenza – Monsignor Francesco Nolè Bisignano, recently passed away and first supporter of the initiative together with the parish priest of the cathedral Don Luca Perri. The project idea, planned and coordinated by the 8centoCosenza aps association, was born from the Riccardo Misasi Ereditare la Terra Foundation, which took care of the organizational aspects. The large tapestries, measuring four meters each and placed between the arches of the robust medieval structure, were made at the textile workshops Desta, a company in Settingiano (Catanzaro) specializing in the production of sacred vestments.

“It should not be surprising that a similar project on this scale takes place in Cosenza,” explains Di Pietrantonio. «In common places it is a peripheral, conservative city. Instead it is not true. It is a city with a tradition of modern and contemporary art. The course is the “seat” of the Bilotti open-air museum with sculptures by Paladino, Rotella, Consagra, Mastroianni, De Chirico, Manzù, Greco … The San Francesco di Paola bridge was built by Calatrava. I myself have directed an artistic residency project here for several years ». The project launched by the Misasi Foundation and adopted by the archdiocese was born and developed from this frequentation of Cosenza. «The cathedral has indicated the themes, I have selected the artists, in relation to their way of thinking and working. There are very Catholic artists, such as Jan Fabre, and others who do not believe. But everyone was thrilled. There is a great desire, even the need for dialogue. This shows that contemporary art can return to churches: as long as artists are called to work ».

«If the artist – wrote Arturo Martini in the 1940s in a largely unheard appeal – felt compromised by a stupendous confidence, we would see the lukewarm warmth, the best ones reassured, the churches again animated by masterpieces. On the contrary, mistrust creates doubt, fear and indecision, hence the mediocre work ». And trust in Cosenza seems to have produced the hoped-for results: «he talked to the artists. Their projects were subjected to the scrutiny of the client, who was always enthusiastic and open. Nobody proposed provocative things. All this shows a maturity on both sides ».

If the subjects may appear traditional, the problems and issues they raise today are new and require new solutions. The outcomes are more symbolic than narrative. L’Annunciation by Vedovamazzei is a blessing hand with colored fingertips. The Last Dinner di Arienti takes place in the space of the cathedral. Some images will take time, like anything that aims at the heart of the mystery rather than the surface. Three copies of each tapestry were made: «One for the cathedral, one for the artist – explains Di Pietrantonio – and one available to churches in other cities, for temporary exhibitions. We built this experience as a pilot project. Places of worship need art. And artists need spirituality. It’s time to leave ».

Art and sacred. The cathedral of Cosenza is dressed in contemporary

Spirituality and religious activity and good health
Controversy over the closure of the Catholic chapel in the most famous airport in Colombia
"The Sacred Valley: spirituality itineraries in the Veddasca Valley", from Lombardy 24 thousand Euro...
Tweet
Share
Share
Pin