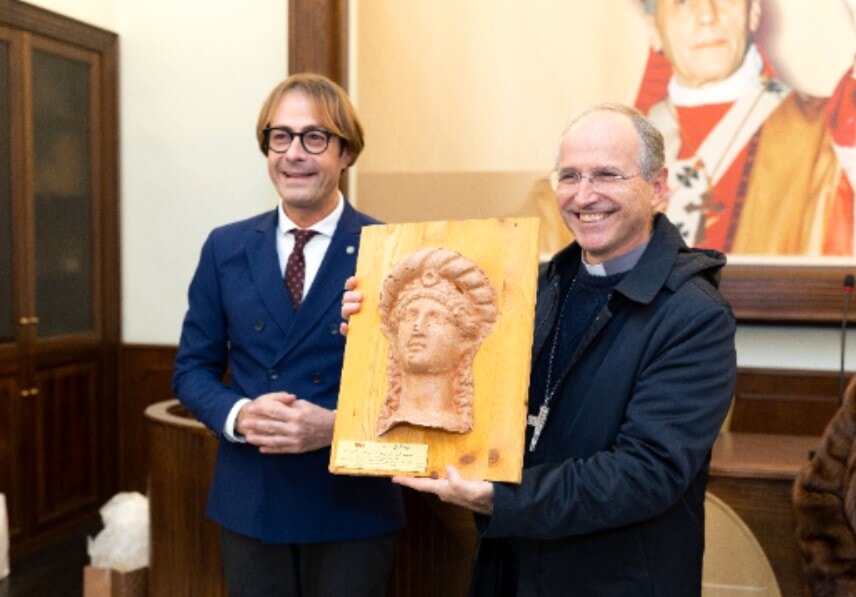 In recent days, the cultural association Le Muse was received in the Curia by mgr. Fortunato Morrone, archbishop of the diocese of Reggio Calabria-Bova.

The meeting saw the active participation of the members and the board of directors for a presentation of the statutory purposes and activities of the well-known Reggio association in 23 years of activity and for an exchange of greetings on the occasion of the holidays we are experiencing.

“A very intense moment – said the president of Muse Prof. Giuseppe Livoti, – since the association has members who come from all over the metropolitan city and beyond and who belong to various parishes in Reggio, therefore we could not fail to receive by the bishop precisely to underline how spirituality is too
an integral part of our partnership that grows not only with cultural moments that enliven Sundays throughout the financial year”.

In fact, in Muse programming, important figures who belong to the Reggio church are usually present from time to time, as we have seen in recent weeks with Msgr. Antonino Denisi or again with the presence of Msgr. Pasqualino Catanese for an intervention on the Holy Family. Livoti recalled how over time the association has been an active part “in several Reggio parishes with moments of both animation and participation in solemn masses in particular by tradition of the statute, on the Sunday before Christmas and on Palm Sunday, ceremonies in which the members have always animated with the Muse Choir, directed by the masters Enza and Marina Cuzzola or by creating particular providers created by artists from Reggio.

And then also a whole series of symbols renewed in the Calabrian tradition like last year, having remembered the famous Palme di Bova during a celebration, involving the administration and the presence of the deputy mayor Gianfranco Marino”.

Archbishop Fortunato Morrone greeted the many present defining the occasion as a fruitful meeting and a lively exchange of life experiences and above all an insight into a reality that gives prestige and value to the city. “Important for all citizens and in particular for you members – declared Morrone -, the cultural mission that the associations must have, and I propose to you of Le Muse a generative cut to be followed by young people in their mission.

It is important – continued the prelate – to know the historical heritage that the city and the province preserves because it is always necessary to have firm roots. Even the associations must look to the city, members yes, but also and above all citizens who have a task: that of animating the debate on the city, on what is useful, necessary for a common and therefore collective growth. Thanking the whole association, Morrone defined the exchange as a “useful and necessary comparison to walk together”.

At the end of the session, President Livoti, on behalf of the board of directors and the members, handed over the associative pennant that pays homage to beauty in art and a sculpture, a profile of Magna Graecia memory, created by the architect and artist Alberto Trifoglio, the face of a kore that best expresses the concept of kalòs kai aghatòs (beautiful and good).

Terracotta sculpture of a young girl in the flower of her femininity but who also possesses the mature awareness of woman and mother. In her greetings, the vice president Orsola Latella expressed “the thought on how even those who work in “other contexts” such as culture, need an authentic confrontation with the faith and having been received by the bishop is a sign of a Reggio church in evolution”.

Archbishop Morrone receives the Le Muse association in the Curia