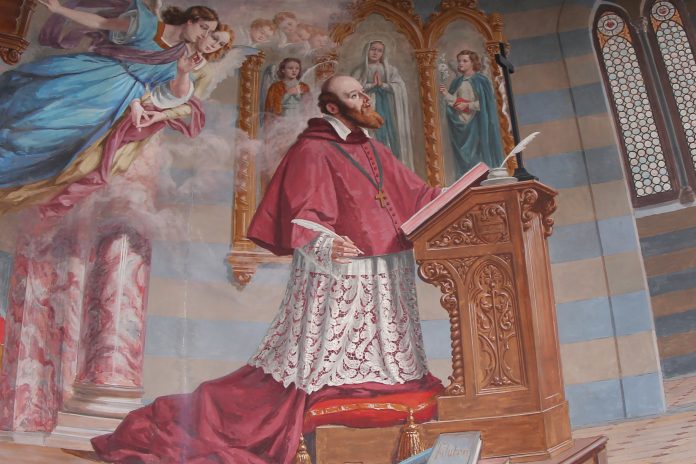 Rome Italy). On 28 December 2022, on the 400th anniversary of the death of St. Francis de Sales, the Apostolic Letter was published “Totus amoris est”“Everything belongs to love”.

“In these words of his we can collect the spiritual heritage left by St. Francis de Sales, who died four centuries ago, on December 28, 1622, in Lyon”explains Pope Francis, who begins the Letter by describing the circumstances of the death of the Holy Bishop of Geneva, who arrived in Lyon for a diplomatic commitment, in his early fifties and in poor health, “for pure spirit of service”.

Staying with the Visitandines, “in the gardener’s house, so as not to cause too much trouble”does not miss the opportunity to carry out his passionate ministry – “confessions, conversations, conferences, sermons, and the last, inevitable letters of spiritual friendship” – characterized to the end by a lifestyle “full of God”, which comes from the certainty that God is in the human heart:

“It is the synthesis of his thought. The experience of God is an evidence of the human heart. It is not a mental construction, rather it is a recognition full of amazement and gratitude, consequent to the manifestation of God. It is in the heart and through the heart that that subtle and intense unitary process takes place by virtue of which man recognizes God and , together, itself, its origin and depth, its fulfilment, in the call to love”.

“Do not refuse anything, nor desire anything” is another well-known expression that he leaves to the Visitandines testifying, in his last Christmas, the profound humanity that comes from the true contemplation of the incarnate Son: “At the school of the Incarnation he had therefore learned to read history and to live in it with confidence”.

“The Criterion of Love” it is the basis for the discernment of desire and also for a right relationship between contemplation and action: “Here is the real question that overcomes any useless rigidity or self-absorption: ask yourself at every moment, in every choice, in every circumstance of life where the greatest love is found. It is no coincidence that St. Francis de Sales was called by St. John Paul II “Doctor of divine love”, not only for having written a powerful Treatise on it, but above all because he was a witness to it”.

In outlining the main stages in the life of the Holy Doctor of the Church – from his birth, on August 21, 1567, in the castle of Sales, near Thorens, by François de Nouvelles, lord of Boisy, and by Françoise de Sionnaz – Pope Francis describes the experiences which marked his vocation and the theological setting based on the dimensions of caring for the spiritual life, with prayer and openness to the Holy Spirit, and ecclesial life. Francis de Sales experiences the great passage between the sixteenth and seventeenth centuries, and “is an interpreter of the change of era and guide of souls in a time that, in a new way, thirsts for God”.

Salesian optimism “who has left his lasting imprint on the history of spirituality, for successive flowerings, as in the case of Don Bosco two centuries later”, and the charity“who does everything for his children”, are two other important traits of his spirituality highlighted by Pope Francis, in addition to his flexibility and capacity for vision, which he finds illuminating as a legacy for the current era.

The relationship with God, who gently draws to himself, leaving man free to consent or to resist and true devotion for the Holy Father, these are two crucial aspects “who ask to be understood today too and relaunched”. Connected to devotion is also the conciliar theme of universal call to holiness: for Francis de Sales, devotion must be exercised by all, regardless of profession or social and life condition and all are called to the path of perfection, “each to his own way”.

From a Salesian point of view, the Christian life does not work however “confused with an easy escape or an intimate retreat, much less with a sad and gray obedience”, but lived in“ecstasy”, finding the deep source of joy in the love of God and in openness to others.

“May the fourth centenary of his birth in heaven help us to make a devout memory of him; and through his intercession may the Lord pour out abundant gifts of the Spirit on the path of God’s holy faithful people. It is the conclusion of this Apostolic Letter, a gift to be meditated upon, in particular for the Congregations and Groups inspired by St. Francis de Sales.

As stated in the Identity Card of the Salesian Family (Art. n°7), Don Bosco chose him as patron “as he proposed, with his work and his writings, that Christian humanism and that methodology of charity which corresponded well to his intimate aspirations. It is a humanism that does not ignore man’s weakness, but is based on the unshakable trust in the intrinsic goodness of the person, because he is loved by God and called by him to Christian perfection, in every form of life. This humanism is a constitutive aspect of the charismatic and spiritual experience of the Groups founded by Don Bosco and has been made their own, as a precious inheritance, by the other Groups today aggregated to the one Family”.

Apostolic letter on the 400th anniversary of St. Francis de Sales • Institute of the Daughters of Mary Help of Christians