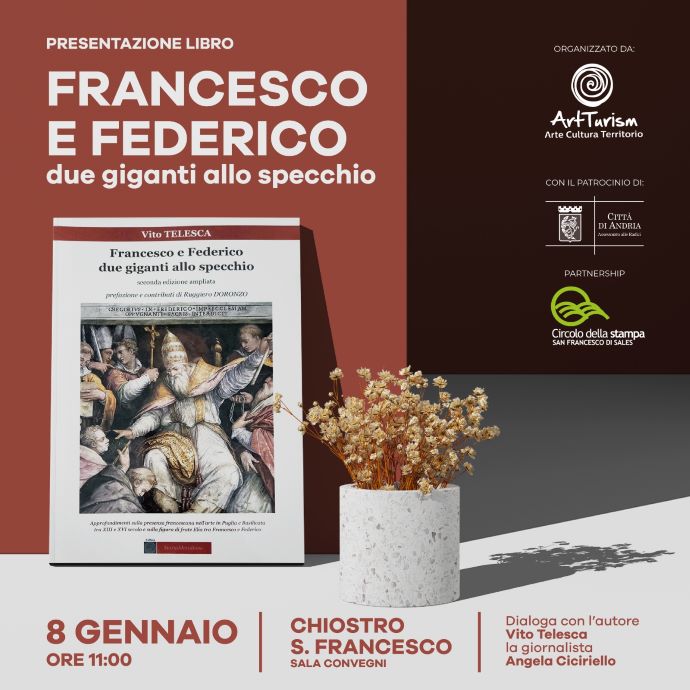 As part of the Andria Christmas promoted by the Municipality of Andria – Assessorato alle Radici, the cultural association ArtTurism has organized various initiatives aimed at enhancing the historical, cultural and food and wine heritage of the city of Andria. Among these there is also the presentation of the book “Francesco and Federico, two giants in the mirror” by the author Vito Telesca, preface and contributions by Ruggiero Doronzo which will be held on SUNDAY 8 January, at 11.00 in the conference room of the Cloister of San Francesco in Andria. A book that explores the figures of two prominent figures of the Middle Ages, St. Francis of Assisi and Frederick II of Swabia.

Two profiles that appear diametrically opposed: the first, with his spirituality, popularizer of the faith, the second, great emperor, emblem of temporal power.
In reality, as will emerge from the reading of this text, the two protagonists of the Middle Ages appear at times very similar, above all for the attempt to address important problems of their period including that of obtaining a diplomatic agreement with the Sultan of Egypt al-Malik al-Kalim: a few years before Frederick, St. Francis meets the sultan to convince him, but in vain, to convert the infidels, while the request made by Frederick, i.e. the cession of a part of the territories of Jerusalem and Bethlehem to the Christians, has a positive feedback. These and other episodes in the life of the Assisian friar and the Swabian emperor will be explored during the dialogue between the author of the book, Vito Telesca, and the journalist Angela Ciciriello. The “San Francesco di Sales” Press Club is a partner of the initiative.

About the blog of VideoAndria.comremember that you can receive all the news in real time from Telegram by registering at the following address >https://t.me/andriabarlettatrani< from Instagram to the following address >instagram.com/andriapuglia< besides from Facebook by clicking “I like” up >Facebook.com/VideoAndriaWebtv< and from Twitter to the following address >twitter.com/videoandria<. Also through Telegram it is possible to send us reports in real time, even with videos and photos. It is also possible to write to us Street Whatsapp to send us reports also with Photo and video by clicking here and subscribe to the group to receive our links by clicking here. We also remind you that you can follow all our tweets at https://twitter.com/videoandria. VideoAndria.com updates are also on linkedin.com/company/andrianews come on https://vk.com/andrianews.

Andria: presentation of the book “Francesco and Federico, two giants in the mirror” on Sunday 8 January at the San Francesco Cloister