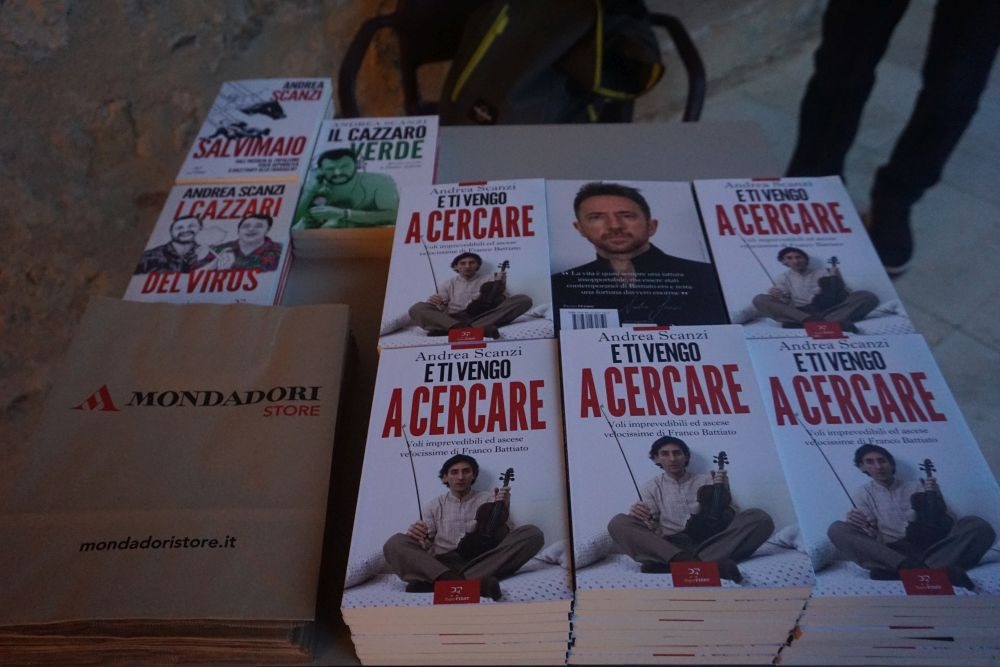 by Roberta Mazzuca – “And I come to look for you. Unpredictable flights and very fast ascents by Franco Battiato ”. This is the title of the show as well as of the homonymous book by Andrea Scanzi who, within the evocative setting of Swabian Castle of Cosenza, has staged an interesting and, at times, exciting journey into the life and thought of the great master of Italian music Franco Battiato. A journey that starts from afar, from the encounter with Giorgio Gaber, first to understand the potential of the singer-songwriter, until the moment of his death.

A long journey that has gone through, with great sensitivity but also profound irony, the immense career of Battiato, with particular attention to the golden period that goes from “The era of the white boar” to “Shellac”, between amusing anecdotes, photos and videos to counterpoint the story, and listening to some of the most significant songs, sung and played by Gianluca Di Febo, leader of Terza Corsia and Floyd On The Wing. Thus Scanzi tells, between music, words, and images, all the phases that have gone through the life and career of the Italian singer-songwriter, describing his eclecticism, his revolutionary vocation and the dialectic between high and low, between outside and inside, crucial to fully understand his poetics. 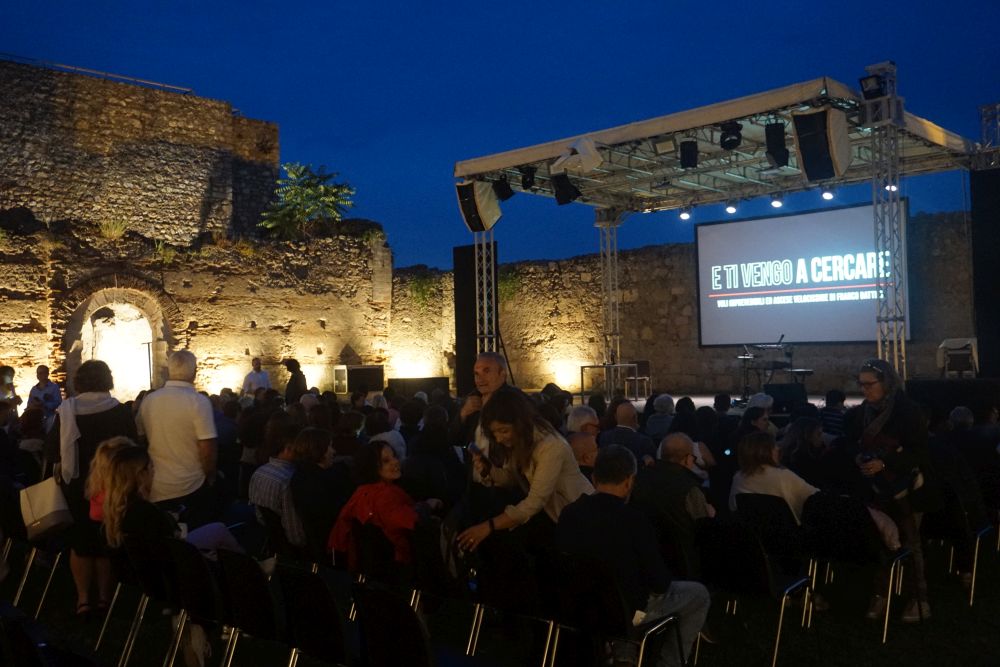 Francesco Battiato, aka Franco at the suggestion of Giorgio Gaber, was a real one “Revolutionary in permanent service”. He went through very different periods, always looking for new ways to communicate his music: protest, pop, krautrock, experimental, rock, author, classical, symphonic. Scanzi tells them all: from the complexity of “Egypt before the sands” to the solemnity of “Like a camel in a gutter”, from the vanguard of “Pollution” up to the extraordinary phase of spirituality that goes from “Physiognomy” to “Caffè de la Paix”, not forgetting the hugely successful songs like “Permanent center of gravity” And “White flag”, the painful “Poor homeland”, the poignant “The cure”, the prodigious “Nevski Prospect” or the same “And I come to look for you”.

He speaks, for example, of the years between the 60s and 70s, of the deep depression into which Battiato fell, and of how meditation, spirituality, the search for something that goes beyond his own body was what saved him: “He was a bulimic of spirituality, and he had an enormous talent: to transform complexity into something even commercial” – says Scanzi from the stage.

It then analyzes the various transition periods, the collaboration with Right Pio, who will become his musical alter ego, to arrive at what he defines as the perfect Battiato trilogy: “The Era of the White Boar”, “Patriots”, and “The Master’s Voice”. Treats the theme of the texts, with which “Battiato enjoyed annoying the bourgeoisie”, but that had a precise meaning: “In the Permanent Center of Gravity he writes:“ Euclidean Jesuits dressed as bonzes to enter the court of the emperors of the Ming dynasty ”. Here, one might say, what have you smoked? It seems cryptic and unfathomable, instead it is simply speaking of a true story, the reference to the historical figure of Matteo Ricci, a Euclidean Jesuit, who entered the court of the Chinese emperors “. Again, he tells of when, after reaching the apex, Battiato enters the transitional trilogy: the Sicilian singer-songwriter fluctuates, does not find his “permanent center of gravity”, embraces what he himself called “Greek idleness”. Scanzi then cites Battiato’s concert at the Vatican, wanted by John Paul II; that of “Red Jackets”, first live album, e the Baghdad concert in 1992: “Even at the time there were, as now, those who said“ but why now? Couldn’t he be pro-Saddam? But Battiato replied “I’m going right now because the victims of the war are children, civilians, and I’m going to bring them some money, some love, some music”.

In short, a long and intense story by Scanzi who, with accuracy and passion, traces Battiato’s career following every junction, peak and hazard of the ironic and multifaceted genius of Italian music. A story that has gone through, once again, the collaboration with Manlio Sgalambro, arriving at the last Battiato, also characterized by a political figure, disgusted by Berlusconi, with explicit and straight songs, such as “Inneres Auge” which, says the journalist, “Comes from a correspondence with Marco Travaglio. I imagine Battiato saying to him “I want to write a song about Berlusconi”, and Travaglio replying “Yes, beautiful, hit hard”. Or, again, the world of covers, with the album “Fleurs”.

One of the most moving and touching moments, as well as revealing the genius and grandeur of an artist like Battiato, is the one in which Scanzi talks about the record “Like a camel in a gutter”: “A Battiato who takes your soul, shatters it, destroys it”. One of the songs on this album is “Poor homeland”: “Poor homeland speaks of Borsellino, Falcone and Tangentopoli, of course, partly true. But when is it written? In 1991. And when did the Capaci and Via d’Amelio massacres take place? A year later, in 1992. So how is it possible that Battiato already sees all this? Because that’s what true artists are, they are hypersentient. This passage is, for me, a cry of pain over the present from the one who had seen the future and then came to tell us about it “.

And, while the notes of the piece accompany these words, all the respect and love of Andrea Scanzi for a man who represented a real revolution in the Italian musical panorama, leaving us life lessons that remain eternal: “And I come to look for you is a polite way to tell, and thank, a giant who taught us how difficult it is to find the dawn inside the dusk”. This is how Scanzi describes the show, staged last night in a land that, perhaps more than others, still tries to find that dawn within the dusk sung by Battiato, in a revolution that, as the master teaches, is never too much late realize.

Andrea Scanzi at the Swabian Castle of Cosenza with “And I come to look for you”: “Franco Battiato? A hypersentient artist who taught us how difficult it is to find the dawn inside the dusk” – IlDispaccio