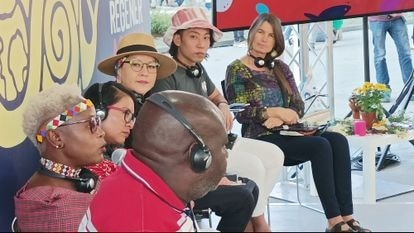 “For us, the Bambuti, the forest is the supermarket,” proclaims Nicolas Mukumo, an activist for food rights taken from the African Pygmies, the ethnic group to which the Bambuti belong, inhabitants of the Kivu and Ituri forests, in the Democratic Republic of the Congo. Mukumo explains that his people –or part of him– unrepentantly resist external pressure and cling to the harmonic orthodoxy of the hunter-gatherer. take from the shelves jungle only what they need. They are nourished by an exuberant biodiversity. Other pygmy subgroups, Mukumo laments, have not been so lucky: “They have been displaced by extractive industries or by the declaration of protected areas.” Expelled from their habitat, their ancestral wisdom slowly eroded, “food colonization”, he continues, has seeped through all the pores of their culture.

Food as a cultural manifestation, as a pillar of identity, was transversal to all the interventions of Decolonize your dietone of the many talks hosted Terra Madre Salone del Gustothe annual fair of slow food, recently held in Turin (Italy). Members of the advisory board of Indigenous Terra Madre, a global network that was born in 2015 to revitalize the gastronomic pride of native peoples. There are already almost 400 communities from 86 countries united by the common awareness of a loss. They warn that the collective dispossession that, to a greater or lesser extent, they have all suffered is clearly reflected in what they eat. They denounce that colonialism (and its descendant with the neo prefix) is served every day on tables around the world.

The colloquium progresses like a carousel of assimilative supremacism. Denisa Dwan, a Diné (or Navajo) woman, gives voice to the cultural genocide suffered by Native Americans who escaped physical extermination: “My ancestors were interned in concentration camps in New Mexico, who came from Utah After traveling more than 800 kilometers on foot. Clothing, language, and spirituality were ripped from their roots. His kitchen also suffered a brutal hack: “They put strange food in our bodies, with a lot of sugar and salt, with many cans; we still suffer the consequences of this nutritional trauma.”

If indigenism is on the rise throughout the American continent, in large areas of Asia it continues to sound like a Western artifact, a disintegrating fashion. “Japan does not recognize us as a people. In fact, most of us do not consider ourselves to be indigenous people. This uprooting occurs throughout the Far East,” says Dai Kitabayashi, spokesman for the Ryukyu, natives of the island of Okinawa.

Kitabayashi explains how the imperial struggles raged against his land. “After World War II, Okinawa was devastated. When the United States Army occupied it, we had to beg them for food.” The Ryukyu, he continues, were thus “doubly colonized mentally.” And yet, there prevails a diet that any nutritionist would recommend: a lot of vegetables and fish, little fat. Not by chance, the island has the best longevity figures in the world, with record absolute of centenarians.

Many confess to us that, thanks to food, they have managed to reconnect with their indigenous identity

Tunda Lepore, Maasai, Kenyan, tells how attacks on gastronomic wealth can come from sacrosanct efficiency. “The red sheep It is a fundamental part of our diet, we feel strongly linked to it. But the introduction of exotic bovine breeds has brought it to the brink of extinction”, he complains. Lepore narrates that, at the time, “many Maasai welcomed the measure with open arms, delighted with the supposed improvement in productivity.” They looked the other way at another type of less quantifiable cost: “Our heritage, our ancestors.”

Conversely, dietary decolonization in Mexico has led to the emergence of a renewed pride in identity. Dalí Nolasco, a tireless Nahua activist, has promoted formations to accredit “guardians of food systems” in your country. Leaders who then advocate in their communities for the recovery of obsolete habits, products and recipes. “Many confess to us that, thanks to food, they have managed to reconnect with their indigenous identity. Through food, we do something political.” Also, on occasions, emancipatory with a gender perspective. “There is a young woman from Chiapas, very involved in expanding the cultivation of native corn, who has completely changed her mentality. She says that she, for now, doesn’t want to get married, the norm among poor women when they reach a certain age. Thanks to her seeds, she has taken charge of her life.”

With militant sarcasm, transforming a vulgar term into an acronym, Dwan summarizes the feeling of the talk: “We don’t want more crap food [en castellano, literalmente, comida de mierda]because crap it is nothing but carbonated, refined, artificial and processed.” And he adds: “Yes, we want to reformulate our taste memory and restore its healing capacity to food.” Or, with a more transcendent desire, as Lepore points out, “use what we eat to restore our dignity”.

Ancestral recipes to decolonize the mind

In Lens, Aboriginal art tells the turbulent history of a land
Small, big actions for a better world
The disillusionment of a left
Tweet
Share
Share
Pin