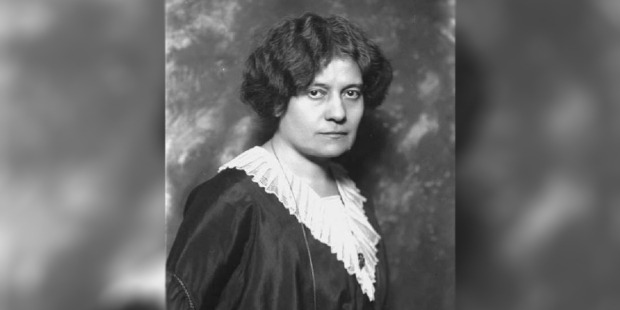 The spirituality of the poet Ada Negri who, through the atrocious pain of the death of her daughter at just one month old, rediscovered her faith in Christ through the Heavenly Mother

The November 13, 2022 issue of the weekly Mary with you hosts an interesting article on poet Ada Negriwhose lyrical stature has been underestimated, at least by the general public, due to the comparison with the contemporary Grazia Deledda, winner of the Nobel Prize for Literature in 1927, the year in which they both competed for this prestigious international prize.

Ada was born in Lodi on February 3, 1870, but her life started uphill because the humble family she soon loses her father, who dies when she is only one year old. She grew up in the poor rooms of the concierge of a building where her grandmother Giuseppina worked as a caretaker, while her mother Vittoria, for her difficult economic situation, he had found work in a woolen mill.

Ada did not disappoint the expectations of the parent who with his sacrifices he managed to make her study, supporting her until she graduated as an elementary teacher, an activity she immediately undertook.

“But an indomitable flame dwells in me”

In 1892, at the age of just 22, he published the collection of poems “Fatalità”, in one of which: “Without name” echoes overwhelmingly the suffering endured for his humble origins:

I have no name. I am the rough daughter of the humble hovel; Plebs sad and damned is my family, But an indomitable flame dwells in me.

Giosuè Carducci he immediately understood Ada’s remarkable poetic qualities, enthusiastically launching her into the world of literature. The great fame of her collected thanks to this collection of poems, following which the minister Zanardelli conferred on her the title of lecturer for clear fame at the “Gaetana Agnesi” high school in Milan, led her to move to the Lombard capital.

Here she met various members of the Italian socialist party including Filippo Turati, Benito Mussolini and Anna Kuliscioff, the Russian revolutionary of whom she said she felt “ideal sister” (Mary with you).

Marriage and birth of daughters

These meetings pushed her towards the engagement in social activities and a literary production oriented in this same area. In 1896 Ada married a textile industrialist of Biella, Giovanni Garlanda, union from which Bianca was born, which will inspire many of his poems, and Vittoria who died just one month after her birth: devastating experience that contributes to the end of the short marriage.

The very difficult period following the death of her daughter, and the breakdown of the marital union brings Ada back to faith. In a confidence made to Don Silvio Riva, who became his spiritual guide, he affirms:

In maturity I dream of reuniting with my loved ones who are in God. I don’t know when it will be but I read the Gospel every day. When I was young I did not practice the faith, but felt the greatness of Christ and Mary without understanding the untouched beauty of Catholic dogma. Then my eyes opened and the pain restored my faith.

The comfort of the Madonna

In this second phase of her life the poet, heartbroken as a mother,find comfort in the Heavenly one dedicating the poem “La Madonna del Soccorso” to her. In these verses he imagines her as a desperate woman with a baby in swaddling clothes in her arms that she finds acceptance with a group of people, a symbol of humanity, who immediately consider her as a lifeline:

(…) The mother went with her little one in her arms wrapped up in the dark shawl/ A harsh sob shakes her shoulders:/ Fawn seems to be fleeing from the snare/ And she went down the mountain and crossed the valley … Stay! … You will become our Madonna/ of Help! You will bring us luck!/ We will make your little one a cradle/ of rags and in your miserable skirt/ You will be as clear as the moon for us.

Maria therefore becomes a constant presence in the creative vein and in the life of Ada, who will be able to bring an agnostic friend of his with cancer, the Florentine writer Giovanbattista Agnoletti, closer to the sacrament of Communion, also giving him a rosary that the man wanted with him to the grave.

And his affection for sacred chaplet is clearly expressed in the verses of the poem “The two rosaries”, which ends like this:

When I too will be / under the ground with my hands on my chest, / at one of my wrists I will have the rosary; / this and finally peace in my heart (…)

Ada Negri: “pain gave me back my faith”

This is the little-known spiritual side of the poetess, who has always leaned towards love of neighbor, who thanks to the pain she experienced, she rediscovered faith in Christ through the Heavenly Mother. Ada, also remembered for being the first woman to be admitted to the Italian Academy, died in Milan on 11 January 1945; her remains rest in the church of San Francesco in her native Lodi, near one of the effigies of the Virgin particularly dear to her.

Ada Negri: the pain for the death of her daughter gave her back her faith