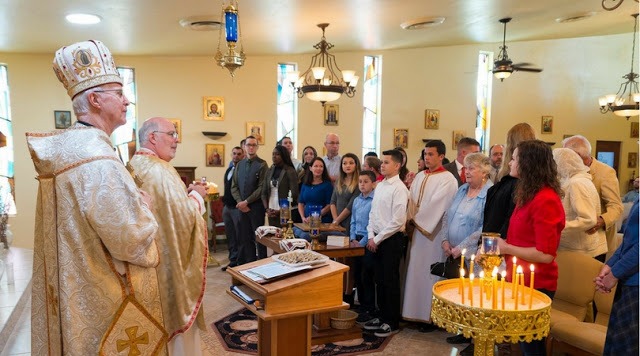 Joshua Mangels converted along with his family and several supporters. It all started with an audio that a friend recommended. He now launches from Aleteia a message to believers and another to non-believers

the pentecostal pastor Joshua Mangelshis family and a group of believers left the Arizona Evangelical Assembly of God Church (Arizona, United States) and converted to Catholicism. This happened in 2017 and Aleteia has connected with him 5 years later.

Mangels now finds in social networks a way to reach as many people who want to discover what has been a true treasure for him. This is her passionate conversion story and his message.

At the time, the report of the National Catholic Register realized that the Pastor Joshua Mangels resigned from his position in the Assembly of God in September 2016 and entered the catechumenate in a Catholic parish of the Byzantine rite in the city of Tucson. His family and several faithful took the step next to him.

Now Mangels and those Pentecostal followers follow the byzantine rite as members of one of the 23 churches sui iuris that make up the Catholic Church. In this way, they live in full communion with the Catholic Church and the hierarchy.

For Joshua Mangels, the transformation was internal. He stated that he was happy with his Pentecostal ministry (an evangelical branch of Protestantism that emphasizes the gifts of the Holy Spirit). However, he began to feel “frustrated with the ebb and flow of church doctrine, fads, and commercialization pressures [pentecostal]».

One day something providential happened.

Thanks to the audio of a friend

He went to a conference of Pentecostal pastors and found it very poor of horizons. On the way back to his house, he began to listen to an audio that a friend had recommended. To Mangels the content reached the bottom of the heart. I didn’t know it was a catholic audiobut that one sermon on mortal sin it was full of light.

It didn’t take him long to get home tell it to his wife.

“You have to listen to this”

“It was like a drink of fresh water. I listened for two and a half hours on the way home. When I got there, my wife asked how the conference was and I said, ‘It was terrible, but you have to listen to this.'”

Among what was said in that recording, Mangels discovered the power of the texts of the Church Fathers. It was something he was unaware of and he began to dive into those sources.

Second step. From the Fathers of the Church he went on to the example of the first Christians, who can contribute so much to contemporary life.

The sacraments began to make sense to me

“I read the Fathers of the Church and it was then that the sacraments began to make sense to me. I began to see how central the Eucharist was to the early Church.”

It was then that he wanted to take the next step:

“If the Eucharist was ordained by Christ, I want to receive the Lord.”

Teresa, his wife, and Joshua undertook a conversion process as a couple. It was not easy, because they were aware that leaving the Pentecostal church of which he was the pastor meant losing their home and job. But it was something they saw “imminent.”

Taking that risk, “we ended up talking night after night about the Fathers, the sacraments, the early Church and everything else,” he recalls.

So Joshua saw, with righteous intent, that he must show his followers what he himself was discovering. That is how in July 2016 he began to illustrate his preaching with the teachings of Saint Polycarp, Saint Justin, the Didache… The early Church displayed enormous appeal in the minds of those who listened to him.

“He was a Catholic at heart”

“I loved being a pastor, I loved preaching. He was preaching at camp meetings and revivals, [esesiones de despertar religioso en las comunidades protestantes] but he was a catholic at heart«.

In September of that same year, he told his congregation that he would resign as pastor and go into catechumenate of the Catholic Church with his family.

The Mangels knew at that time to Father Bob Rankin, parish priest of the Byzantine Catholic Church of Santa Melania. This priest explains:

“I tried to teach him how to be a Catholic, but the first priest he met was not of the Roman rite. So I used sugar packets on the table to explain dogmatic theology and ecclesiology.”

Father Rankin explained that despite the differences between a Pentecostal style of worship and the divine liturgy , “they came to the right Church because of the kind of spirituality they had. They come from this Pentecostal background and have the experience of conversion and surrender of their lives to Christ. They wanted a demonstrative liturgy and the Eastern liturgy is energetic, worshipful: it is a call to experience God, destined to burst into tears».

Rankin says that Joshua Mangels, his wife and family, as well as the other catechumens who came from the Protestant Pentecostal Church, showed “admirable apostolic zeal” that will be a great asset to the Catholic Church.

For Teresa, Joshua’s wife, the path to the true Church has filled her life with happiness. It is something that she noticed especially when she believed that Christ «gave his true Body and Blood«. They recently celebrated their 25 years of marriage.

A Pentecostal pastor converts to Catholicism and launches two messages