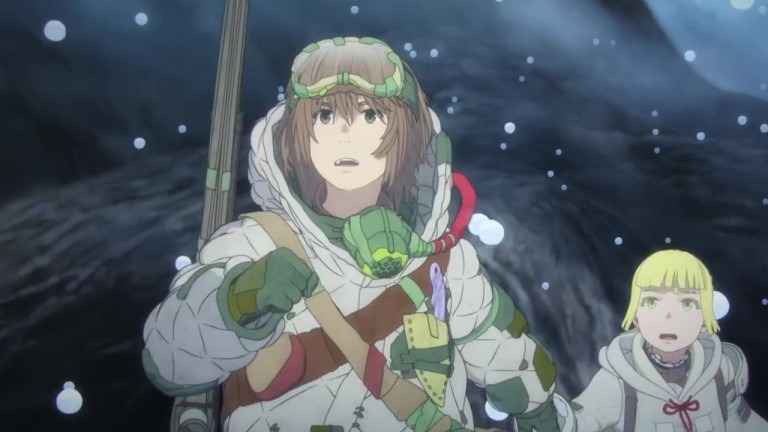 news culture Why should we watch the anime Kaina, spiritual heir of Miyazaki’s Nausicaä?

Launching on January 11 on Crunchyroll, the Kaina of the Great Snow Sea anime is already shaping up to be a major series to follow for anyone who appreciates the author of BLAME!, Aposimz and Knights of Sidonia manga, or has been marked by the eternal Nausicaä of the Valley of the Wind.

Complete your collection of Miyazaki films

A new project by the author of the manga BLAME!

Arrived discreetly on the catalog of Crunchyroll animated series, Kaina of the Great Snow Sea was no less expected by knowledgeable viewers. Because it is the new creation of the surprising Tsutomu Nihei, the author of the manga BLAME!, Knights of Sidonia or Aposimz, the Planet of the Puppets. Unveiled last year, this project is the result of a partnership between Crunchyroll, Fuji TV and Slow Curve and coincides with the studio’s fortieth anniversary celebrations Polygon Pictures animation. This is not the first time that the mangaka has collaborated with the Polygon Pictures studio since they had already worked together on the adaptation projects of BLAME! and Knights of Sidonia in animation. Title Kaina of the Great Snow Sea (Oyukiumi no Kaina in original version), the name of the series suggests an ambitious and exotic work which takes as its setting an immense sea of ​​snow. Kaina is the name of the main character who we know, via the first trailer, that he will cross paths with a young girl from a tribe living in a completely different environment, on the other side of the clouds.

Directed by Hiroaki Ando (Ajin, Listeners) within the animation studio Polygon Pictures, the anime Kaina of the Great Snow Sea is scripted by Sadayuki Murai and Tetsuya Yamada, supported by the duo Kohta Yamamoto / Misaki Umase on the musical compositions. Scheduled in Japan from January 11, 2023 on Fuji TV (+Ultra), the series is broadcast at the same time with us on the Crunchyroll platform. Note that the first 4 episodes were presented for the first time as part of the last Crunchyroll Expo (CRX) convention in 2022.

The heir of Nausicaä of the Valley of the Wind?

Kaina of the Great Snow Sea is a work halfway between fantasy and science fiction, but its striking visuals above all inevitably refer to Hayao Miyazaki’s masterpiece: Nausicaä of the Valley of the Wind. If the latter dates from 1984, it nevertheless relies on quite similar artistic direction and ecological concerns. In the background, it is a question of the impact of man on nature and on the means of preserving the environment, and by extension all the living beings that inhabit it.

The project created by Tsutomu Nihei therefore has airs of assumed post-apocalyptic fantasy, presenting a humanity which strives to survive as best it can in the face of a nature that has become dangerous and no longer hesitates to regain its rights. In Kaina of the Great Snow Sea, no deadly spores from the vegetation but an immense ocean of snow which extends as far as the eye can see and which condemns any movement on dry land. Human beings have no other choice than to take refuge in the roots of gigantic trees or in the canopy that covers the atmosphere of the planet. Here too, isolated individuals will try to find a peaceful solution to their differences in a world divided into two radically different populations which have established themselves on either side of the gigantic orbital trees. On one side: the people of the Celestial Membrane to which Kaina belongs, located in the heights of the Canopy. On the other: the inhabitants of the sea of ​​snow who live on the surface and whose young Liliha would be a princess targeted by rival clans. Their meeting risks upsetting the destiny of their planet and perhaps even offering it a chance of salvation. But they will also have to overcome their differences if they want to protect the environment from the immense catastrophe that threatens it.

The world is shrouded in an endless ocean of snow that keeps growing. Humans lead their existence either curled up against the roots of giant trees on the surface or high up in the canopy that spans the planet’s atmosphere. An unexpected encounter between a young man from the Canopy, Kaina, and a young woman from the surface, Liliha, will trigger a chain of events that will change the fate of the world. – Synopsis of Kaina of the Great Snow Sea on Crunchyroll

A first episode full of promise

Since January 11, 2023, subscribers to the Crunchyroll platform have therefore had access to the first episode of the series. Kaina of the Great Snow Sea. Entitled “The Boy from the Canopy”, it depicts the contours of a universe at the crossroads of worlds between SF and fantasy. By following in the footsteps of young Kaina, we discover that a whole range of exotic fauna has developed in the Canopy (giant caddisflies, treetop grinders). But the most important thing is that this fauna plays a very specific role in the nature of this planet, filling the holes that regularly form in the Canopy. Well aware of their importance, Kaina makes sure to hunt only one of these insects to collect its eggs in order to moderately feed her tribe. A tribe composed only of old people who fear for the future of the young man in a land so unfavorable to life. According to the words of the elders who knew a past where existence was easier and the inhabitants more numerous, the village of Kaina is today the only one that still exists.

The series relies on a bold artistic direction that strikes the imagination by presenting two very distinct facets of the same planet. The Canopy seems to be made up of giant bubbles that form like a translucent solid surface on which you can walk but which it is also possible to cross to descend into the branches of the trees. This is where humans have taken refuge to find breathable air and survive against all odds. The danger is permanent and also lies in the risk of falling into these increasingly large holes which have multiplied lately. But not only. Water is also becoming increasingly scarce, causing the orbital trees that support the village to wither and dry up.

Elsewhere, beyond the White Sea, there are other handfuls of humans who evolve according to a completely different way of life, traversing the immense sea of ​​snow on very strange mounts. This is where Princess Liliha will find herself brutally separated from her troops, fleeing in a balloon that will take her to a place she knows nothing about : that of the Canopy…

Kaina: a manga already in progress and soon a film?

Launched since February 26, 2022 in the pre-publication magazine Monthly Shônen Sirius from Kodansha editions and available in hardcover format (tankobon) since December 8, the manga predates the airing of the anime and even benefits from an English-language publication. It is drawn by Itoe Takemoto (The Beast Player) from the original story by Tsutomu Nihei, but it is not known if this manga will have the honors of a publication in French. The following video gives us an interesting overview.

Multi-faceted, the project Kaina of the Great Snow Sea should also take the form of a feature film, according to recent information published on the official website of Crunchyroll. Few precise elements for the moment, but strong signals from Japan indicating that a sequel is already planned in theaters. This information was indeed revealed during the filming end announcement screening held at TOHO Cinemas Shinjuku in Tokyo a few days ago.

anime Kaina of the Great Snow Sea is to follow on Crunchyroll.

This page contains affiliate links to some products that JV has selected for you. Each purchase you make by clicking on one of these links will not cost you more, but the e-merchant will pay us a commission. The prices indicated in the article are those offered by the merchant sites at the time of publication of the article and these prices are likely to vary at the sole discretion of the merchant site without JV being informed.
Learn more.

Why should we watch the anime Kaina, spiritual heir of Miyazaki’s Nausicaä?