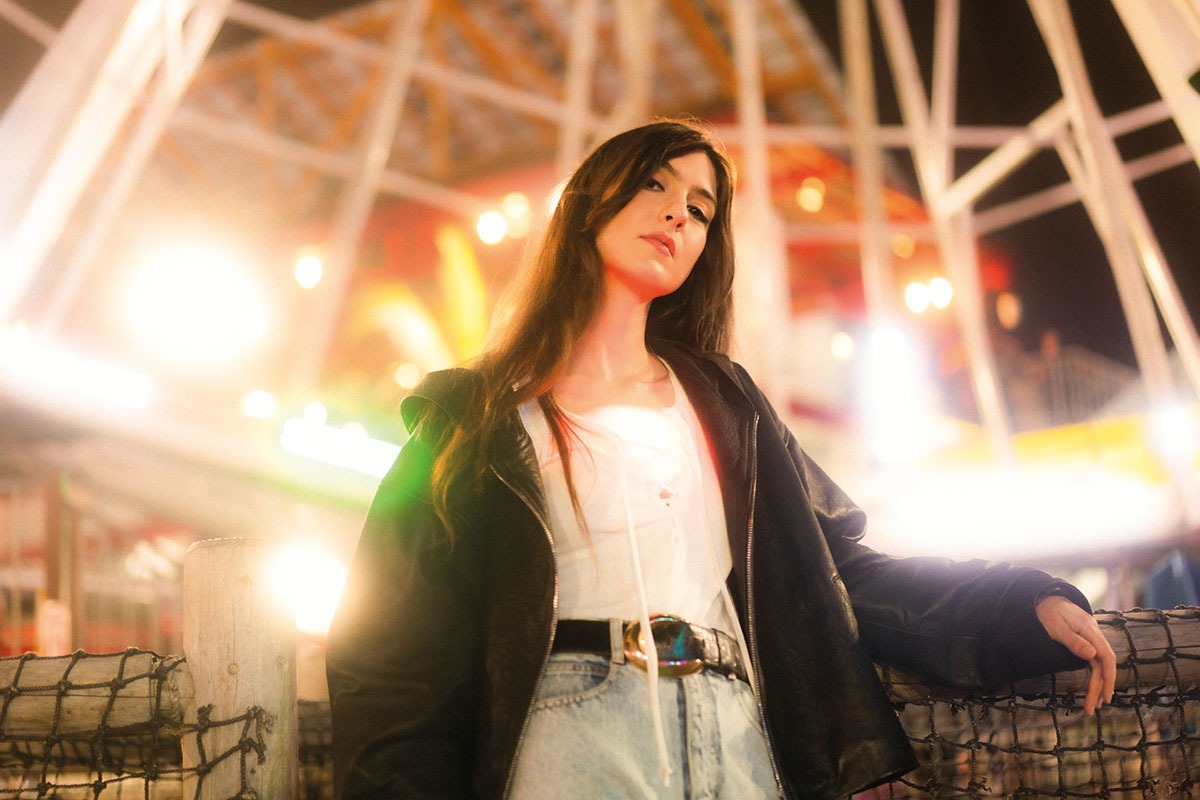 The high priestess of modern folk returns with And In The Darkness, Hearts Aglow, the second part of his mystical-pop trilogy. We were able to collect his confessions during his last visit to Paris. Where it is about a Holy Trinity bringing together God, Kurt Cobain and Kanye West.

Pop, for a woman (and many men), too often consists of undressing in clips to the sound of sluggish music. Weyes Blood has nothing to do with this artistic lumpenproletariat: it is in search of meaning, spirituality and beauty. A priori, she came from afar. Born in 1988, she grew up in Doylestown, about fifty kilometers from Philadelphia. Her parents, born again musicians, made her sing in the local church choir. Weyes Blood could have become a sinister clam frog, seeing no further than the acoustic guitar on which she taught herself to play. It was without counting on his gifts and his curiosity. And his calling: Record church pop, classic and innovative pieces at the same time. »

Settled for a few years in California, she has already released several outstanding records. In 2015, the EP Cardamom Times acts as a baptism certificate. She would have to be reckoned with. Since then, she has continued to progress, until her masterpiece of 2019, Titanic Rising (which we voted album of the year). Splendid voice tinged with gospel, celestial melodies, inventive coating designed with producer Jonathan Rado (from Foxygen): an angel descends to earth. To definitively believe in this miracle, we only had to see Weyes Blood in real life. We learned that she made an appearance on September 21, not in Lourdes, but at the Hotel Grand Amour in Paris. We went on pilgrimage to the address indicated, where we were treated to a private audience transcribed below. It is about his new wonder, And In The Darkness, Hearts Aglow, but not only. Weyes Blood, or a sort of pop Easter: thanks to her, folk is resurrected.

“KANYE WEST IS AN INTENSE, GIFTED, UNEXPECTED ARTIST. TALENT DOESN’T ALWAYS FALL INTO THE HANDS OF PEOPLE WHO ALSO HAVE LUCIDITY.

There is a mystical side to your music, which has become extremely rare. When did pop lose its soul?
Weyes Blood: It’s simple: pop has definitely unscrewed at the death of Kurt Cobain. He is the latest rock icon to have been able to breathe something totally new and inhabited into it. He had crazy talent. And with it, a leading underground group became the most popular group in the world. After the collapse of grunge there were immediately horrors like the Spice Girls or Britney Spears – which sound pretty good compared to what we hear nowadays. At the time we could say to ourselves: pop is going in the wrong direction, there will be no more possible return, no one will take any more risks in the pop format, there will only be mercantilism and marketing – which is not good for music, you will agree. Today, there is still a strange hybridization: some indie artists obtain surprising notoriety, and conversely a manufactured star like The Weeknd seeks a certain quality. It doesn’t reinvent the wheel, it’s nostalgic, retro, but when I come across it on the radio I don’t change stations. There is some hope, as long as people’s ears remain accustomed to different and bold things.

Julian Casablancas’ ambition at the start of The Strokes was to be as sharp as the Velvet, but to successfully break into the mainstream. Is that also your goal?
What’s the point if the underground stays underground? The lines do not move, and then there is a complacency in marginality… An artist must spread the good word, therefore get out of his niche. Courtney Love didn’t say anything else: it’s nice to only talk to your micro-community, but hey, it’s small-arms, you have to at least try to go further. Sabotage the mainstream! Let’s launch a crusade to save culture! A lot of people aren’t aware of what’s good in music. It’s a privilege to be connected in a good way, and it would be selfish not to share it with others.

Your voice is very important in your aesthetic. What is your definition of a good singer?
He is someone with whom nothing rings false, nothing is affected. People who overdo or imitate are on the wrong path. You just have to be yourself, with your vulnerability, your cracks. I don’t like a beauty that is too perfect, I prefer that there are flaws. I love Stevie Wonder, Harry Nilsson, Neil Young, Willie Nelson, Marianne Faithfull, Joni Mitchell… Their voices are strong, but they don’t try to hide who they are. It’s not staging. I may love Ronnie Spector and The Platters even more, but it’s hard to name just one name…

In the Beatles, do you prefer George Harrison? We feel in your last two discs that the album All Things Must Pass traumatized you…
It changed over time. As a child I had a passion for McCartney, then as a teenager it was George Harrison’s turn, and now it’s Lennon. But my Harrison period lasted a long time: he carries such sadness with him. “While My Guitar Gently Weeps” is one of the most beautiful songs I know. At Lennon I like the fragility, the errors, and at the same time his gifts.

Is there good gospel these days?
You will undoubtedly find excellent choirs if you go to a Baptist church in the depths of a remote countryside… More broadly, Christianity remains a big market in the United States. Religious music, of varying quality, sells as much as mainstream pop.

Your Christian education remains important to you, or have you emancipated yourself from it?
Of course that counts. As a teenager I distanced myself from pure Christianity, but I remain very attached to spirituality. Except that I created my own cosmology, I took a close interest in Buddhism and Hinduism, in the links between the different religions. That a philosophy from the end of the world can join the Bible, that truths come back through the millennia, that seems to me to make sense.

What is the spiritual life like in California where you live? Is it a bunch of atheists?
The New Age is very present there. People believe in astrology, in pseudosciences… The futuristic thinking of Silicon Valley is like a new religion, with tech gurus. It is scary. We don’t know what we are exposing ourselves to, what will be the side effects of everything we invent there – we often only realize much later the damage of what passed for progress.

Your nickname Weyes Blood is inspired by the novel wisdom in the blood (Wise Blood) by Flannery O’Connor. Is it still an influence for you?
It was crucial reading as a teenager. This idea of ​​the Church of Christ without Christ… I was 15 when I read wisdom in the blood : this book spoke incredibly to the sad and anxious young girl that I was then.

And in music, do you know the mystical-folk singer Judee Sill, who you can think of?
She died in the late 1970s, if I’m not talking nonsense. She still has some fervent fans, although her notoriety remains underground. It took posterity for her to be understood: her rating has risen since her death. She had struggled with success – heroin addiction, bad acids… She was very spiritual at the same time, she indeed embodies a mystical side of the counter-culture. I feel close to his vision of God and music.

Kurt Cobain, Judee Sill: is success, whatever its degree, a curse?
It’s a cursed blessing, or a blessed curse, in between… Success does not exist without bad aspects. It would be a lie to tell you that I would not like to have a wider audience. I would love to play in front of more people. But fame seems to doom everyone it reaches to dark madness. I don’t wish that.

Before you, folk had become moribund music. I have the impression that you have been able to bring it back to life…
There’s no need to brag: folk was so dead that it was easy to revive it by doing something new, starting from the classics. Pop in the broad sense is often decorative, it’s soulless recycling. It’s easy to stand out.

Is there a scene around you?
I’m very solitary: not rock enough for real rockers, irreducible to Americana or electro… But that’s fine with me.

What do you know and appreciate about France?
I like Erik Satie, Debussy, the impressionist painters, the XIXe century as one might imagine, but also Françoise Hardy, Michel Foucault, Air, Daft Punk and Leos Carax. I also like the fairly frank French attitude, which Americans often find impolite: I see honesty there where one is more hypocritical in other countries. Ah, and don’t forget Gabriel Fauré and Olivier Messiaen!

Messiaen is known only to initiates in France…
But no ? I thought it was a national monument in your country. I have the greatest admiration for his Quartet for the end of time.

Nothing to do with Messiaen: I would have liked to have your opinion on Kanye West, who also speaks of God. Is it a clown or genius?
He’s definitely not a clown. Psychologically, he is probably not quite with us… He should not be taken as an example for everyday life. He is a problem for many people who are bothered by his mental illness. From there to throwing him under the wheels of a bus… He is an intense, gifted, unexpected artist. You have to understand that talent does not always fall into the hands of people who also have lucidity. God likes to give it to people who are humanly or politically deviant – like John Maus, who shocked some by participating in the pro-Trump rally on Capitol Hill. It’s too complex a conversation to settle in two minutes. But let’s refrain from judging in a hurry.

And In The Darkness, Hearts Aglow (Sub Pop).