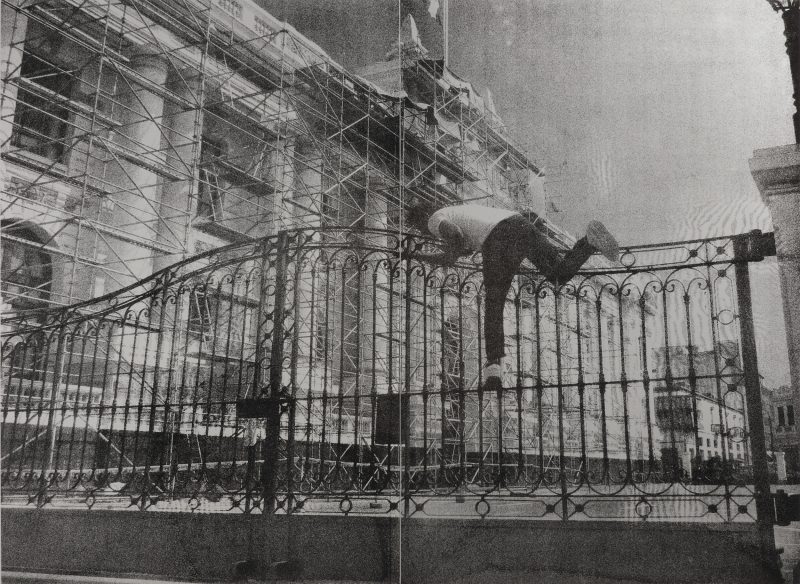 The exhibition in homage to Alberto Borea (1979 – 2020) opens the way for the rescue of contemporary art in a country without memory, where the deceased protagonists of our cultural work very quickly fall into oblivion. We have very gifted young people, like Christian Quijada or Miguel Alfaro, who disappeared prematurely in the last decade, whose works testified to some of the most interesting concerns of this century.

I met Alberto Borea in 1998 and we quickly began a friendship that lasted until the end of his life. He was my student for about six years and we shared interests of all kinds, which certainly transcended art, learning and practicing it. Our frequent conversations were interrupted during the year in which he went to live intensely in Buenos Aires. Upon his return he was full of convictions, perhaps the most important of which was how art can be integrated into life or vice versa.

He greatly admired his freedom and his heterodoxy, his rejection of complacency and his rebellion. More than an artist attached to a discipline, he followed multiple paths at the same time, and I am convinced that, parallel to the visual aspects, he had a marked inclination for music and especially poetry.

I introduced him to the secrets of film and video. He had shown some occult films in class, especially by Elias Merhige, a revolutionary American director at the time. It was about Begottena visual experimentation on God giving birth to humanity, done in contrasting black and white.

It enthused him in such a way that he started from the aesthetics of Merhige to make Trip, a collection of shots taken during his long exploration of Cusco. He turned all the shots to porous black and white, since those were times in which technology did not allow too much fanfare. But he made scarcity a virtue, one of his characteristics throughout his entire career. He sharpened the effects, slowed down the image, and at the end, as he walked into the abyss, he raised his arms in a flying gesture.

I was finishing the work on my home PC and I pointed out that this trip was a flight, so he repeated the final image creating the sensation of rising into the sky. In the end he gave me a DVD that brought together his early research.

We all love Black. That’s what we called him because of that image of a seducer, let’s say Moroccan, that he deserved so much success. He, like very few, knew well that our physique is a continent of spirituality and he showed it, particularly, in his videos. His image was so magnetic that it became an object and subject of art and many artists approached him to photograph him. Gihan Tubbeh and Hans Stoll have been in charge of showing it.

Alberto made his body a support for the work of art. he was the best performer that I have known and yet his actions were only for the camera. In the early series in the name of the father, he is shown making interventions inside the Guggenheim Museum in New York. Extremely bold act because everything is prohibited there, even more so to photograph. I questioned him —regarding the title— that the museum was like a mother, since it operated like a womb, and he replied that the real father was Frank Lloyd Wright, his architect.

I do not doubt the emotional approach to this work by curator Max Hernández and Adriana Tomatis, his co-curator. Max was a teacher for Alberto and Adriana, his fellow student. They know very well the impulses that marked the creative process of an unclassifiable artist. Although it is debatable when talking about urban archeology, the statement is correct: “Borea uses his body with a sense that is sometimes parodic, other mystical, other times enigmatic, although always critical of the environment in which it is located…”.

Alberto was essentially a creator. He was never orthodox in anything. During his long stays in New York, he drew positions from the avant-garde of the previous century and created his identity from neodadaist discoveries, and later from Rauschenberg, as can be seen in the fragments of vans painted by him. . There are traces of Camnitzer and Andy Goldsworthy himself. But these appropriations were all diluted and absorbed by an absolutely creative personality that liquefied the origins and turned them into personal property. He knew well that we all create from what we have previously absorbed and has left traces within us.

Unlike fellow cosmopolitans, say Ishmael Randall Weeks, Alberto did not consider himself a professional, but rather a doer. There may be a spatial and constructive approach between them, but both used to face a process that seems diametrically opposed. And that is precisely what gave him a flight that was never fully understood. I still believe that his exhibitions in Lucia de la Puente came out of the conventions of this space, since his work was closer to museums and cultural centers, and further away from established commercialization.

In 2019, leaving the South Library, I ran into him. He looked haggard and prematurely aged. She didn’t want to ask the obvious but she understood that the end of one of us was approaching. We talked briefly about art and love, but looking at her gave him away. The sly giggle and mischief of old had evaporated. We gave each other a big hug and we never saw each other again.

The following year, missed by his absence, I went to his Facebook wall and saw his last photo. He was looking at the camera with a melancholy smile. His gray hair, his skin color and his unusual thinness made me realize that he had died.

We all love Black | “ALBERTO BOREA: Archaeologies of the present and poetics of the city” in the Germán Krüger Espantoso Space of the ICPNA in Miraflores – Caretas Cultura