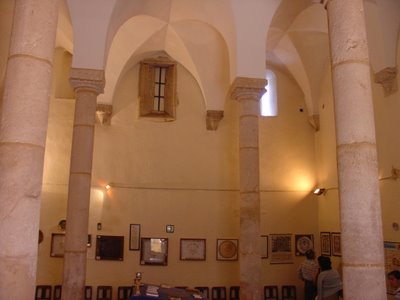 AJN Agency.- Tomar is a small historic town in central Portugal, about 145 kilometers northeast of Lisbon, best known for the remains of an impressive Templar fortress and a magnificent monastery that attract many visitors. Less known is the Synagogue of Tomar, the oldest Jewish prayer house in Portugal, which reopened its doors at the beginning of 2020 -after being closed for two and a half years-, to receive people from all over the world who are looking for Get to know one of the oldest structures in the ancient Sepharad region, the name by which the Jewish community called the Iberian Peninsula. The AJN News Agency She had the opportunity to visit the Synagogue when she was invited by the Portuguese Ministry of Tourism to learn about the Jewish legacy in that country.

The historical institution, of great relevance, was closed for renovations at the end of 2017. It reopened in March 2020, right at the beginning of the pandemic. “The Synagogue has been open to the public for decades. The intervention that has taken place in recent years has been to make improvements, since there are some problems arising from the passage of time”, explains Ana Soares, head of the Tourism and Culture division of the municipality of Tomar, in dialogue with the AJN Agency.

The Synagogue was built in the 15th century, between 1430 and 1470, when the local Jewish community gained some prominence. It was located in the center of the Jewish quarter, in what later became known as “Rua nova que foi judaria” (“the new street that was the Jewish quarter”). It is the best preserved Jewish temple from medieval times.

The old door through which the Synagogue was entered when it had no main entrance.

Architecturally, the building has four columns, representing the four matriarchs of Israel. These, in turn, are covered with twelve points, symbolizing with that number the twelve tribes of Israel. In addition, next to the Synagogue are the remains of an ancient “Mikveh”, as the traditional bath is known to which Orthodox Jews go to purify themselves before an important ceremony.

It remained in force as the community temple until 1496, when King Manuel I of Portugal issued an edict, according to which the Jews had the option of converting to Christianity or leaving the region. As a result of the new policy, the Synagogue ceased to function in 1497.

“Since its closure, the building has had several uses, being a prison, a Catholic chapel, a haystack, a barn, a grocery store and a warehouse. Only in 1921 was it able to recover its lost dignity, when it was declared a national monument,” says Soares.

The modern history of the Tomar Synagogue is linked to the activities of Samuel Schwarz, who bought the building in 1923. Samuel Schwarz, of Polish origin, took refuge in Portugal before the outbreak of the First World War. From there, he dedicated himself to restoring and organizing Jewish life in that country, even serving for a time as President of the Jewish Community of Lisbon. He undertook on his own the cleaning and restoration works of the Synagogue of Tomar, which, in 1939, and after a donation from Schwarz, became a museum.

The official Ana Soares with the key that opens the entrance door to the Synagogue.

Thanks to Schwartz, the building remains with its structure as it was in the fifteenth century. However, it does not function as a synagogue, since there is no Jewish community in Tomar. In its place is the Abraham Zacuto Luso-Hebraico Museum, which exhibits archaeological finds that prove the existence of Jewish life in Portugal since the Middle Ages. “It is about the recovery of a national heritage, still little known, but thanks to the intervention of the municipalities, the Jewish communities of the region and the Judicial Network itself, it is beginning to be more visible,” says Soares.

This is what the street looks like today Rua nova that was Jewishwhere the original Synagogue from the 15th century is located.

Vittorio Gassman, the Italian actor and director whose mother took an ‘n’ from his last name to save him from the Nazis