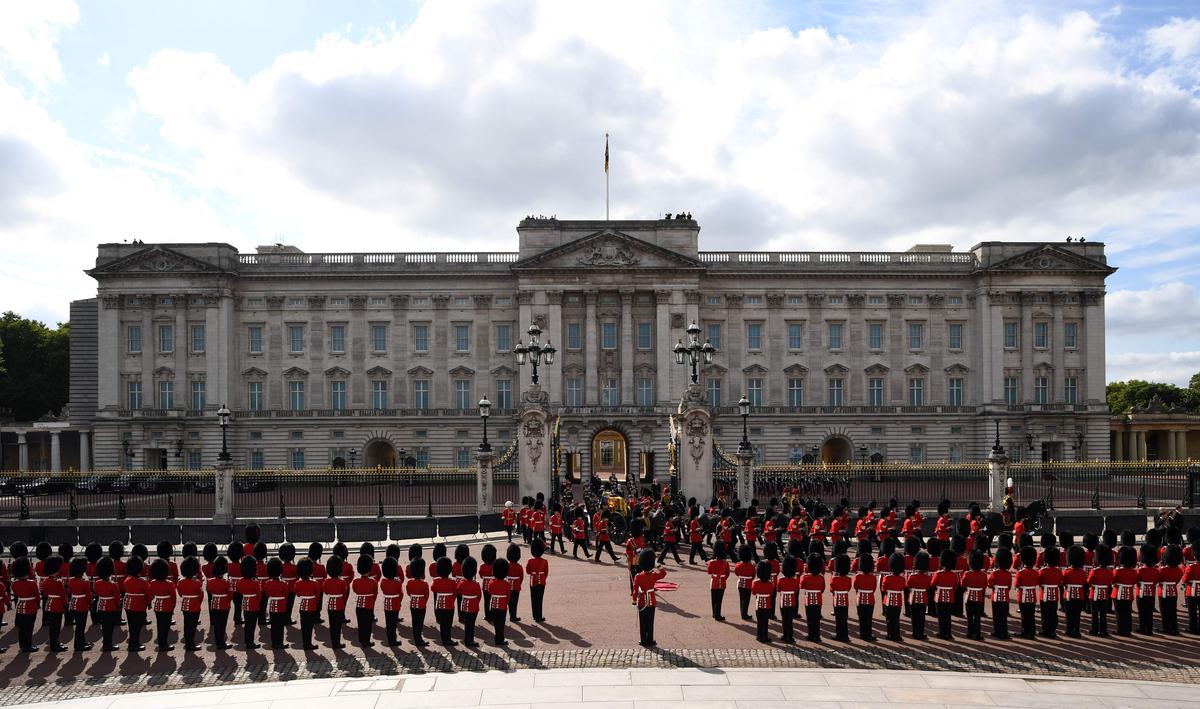 – 2:22 p.m. (1:22 p.m. GMT): A sumptuous procession, as meticulous as a choreography, takes the funeral procession from Buckingham Palace, where the Queen had spent most of her time alive, to Westminster Hall.

In red, the royal guards and their typical black fur caps lead the way. Then appears the oak coffin transported on a gun carriage, drawn by several black horses. Covered with the royal standard, the imperial crown, shining with all its stones and diamonds was placed there, as well as a crown of white flowers, including roses, dahlias and foliage picked from the gardens of the royal estates of Balmoral and Windsor. .

The Queen’s four children, in military uniform with the exception of Andrew, follow on foot. Just behind them, two of his grandsons William (in uniform) and Harry, in costume.

[A LA UNE A 18H]
After a moving procession led by her children on foot, Queen Elizabeth II’s coffin has arrived in Westminster, where the public can pay her final respects until her funeral on Monday #AFP 1/5 pic.twitter.com/u6MY1FE6Vo

Behind again, their two wives in two different cars, Meghan and Kate, black veil lowered on the forehead. Kate, Princess of Wales travels with the Queen Consort, Camilla, mother-of-pearl necklace and black hat..

Every minute, a cannon shot is fired from Hyde Park, alternating with the bell of Big Ben.

– 3:00 p.m.: perfectly respecting the schedule, the coffin enters the Palace of Westminster to the sound of a religious choir, where many political leaders are gathered, including the Prime Minister appointed a few days ago, Liz Truss.

A brief religious service follows, officiated by the Archbishop of Canterbury, the spiritual leader of the Anglican Church.

– 3:40 p.m.: the king and queen consort leave Westminster to cries of “Long live the King”.

The members of Parliament, all dressed in black, leave in turn. The great hall of Westminster is empty except for the royal guards, and their black armbands as a sign of mourning, who will watch over the remains day and night, with their backs to him with their heads bowed… and press photographers, assembled on stairs near the entrance.

– 5:00 p.m., the public, who have been waiting for the first since Monday evening, can finally enter. The Queen’s remains are now accessible – from her closed coffin – to the public.

For a little less than five days, the population will be able to gather briefly, 24 hours a day until September 19 in the early morning of September 19, a few hours before the start of the funeral. Mostly in tears or watery eyes, visitors are only allowed a few seconds in front of the coffin.

Videos. The Queen’s coffin on display in Westminster, London is being buried