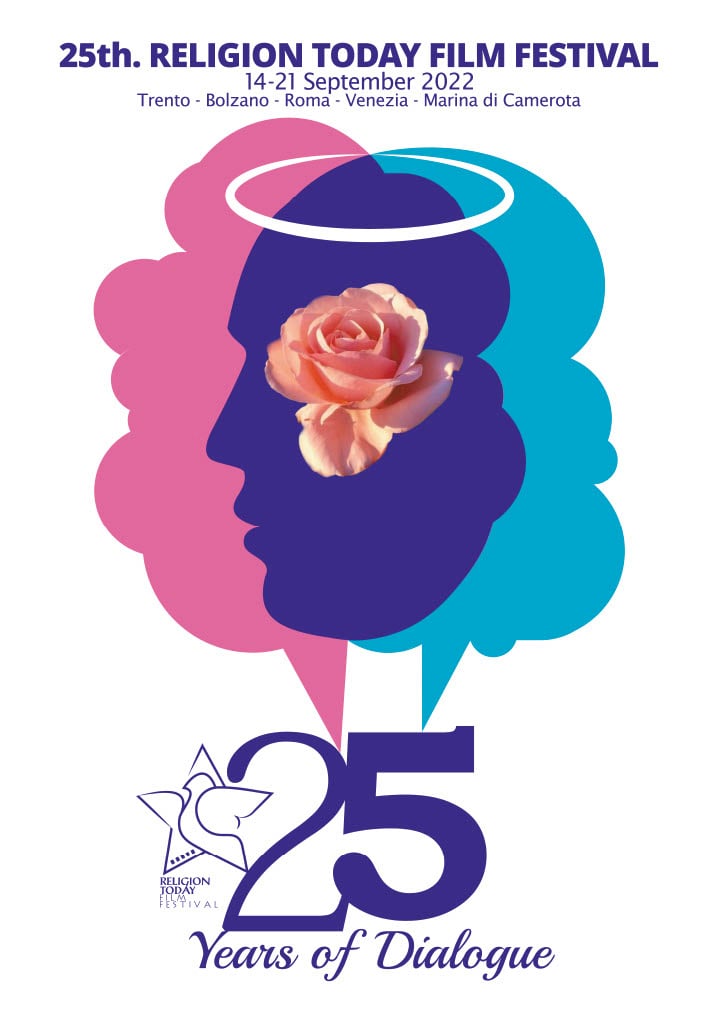 Venezia 79 presents the Religion Today Film Festival: 25 years of dialogue and cinematic interculture, between spirituality and women as protagonists

The round table “Dialogue between faiths, from a female perspective” opened the 25th edition, full of contents, at the Lido of Venice. The program has been unveiled from 14 to 21 September: Religion Today will bring 42 films in competition from 23 different countries to Trentino, with 11 national premieres, 4 European and 1 international premieres. Over 50 guests from all over the world with the Women of Faith for Peace. Plus 3 exhibitions, 3 concerts, 10 debates, 10 masterclasses for young talents.

Venice Lido – In the prestigious setting of the 79th Venice International Film Festival, guest at the Hotel Excelsior della Fondazione Ente dello Spettacolo, the 25th Religion Today Film Festival he unveiled the rich program of films, previews, characters and events that will involve the public from 14 to 21 September 2022. Also this year the purpose of the event will be to meet people and dialogue with them, with an itinerant approach and through screenings at Trento, Baselga di Pinè, Arco, Dro and Bolzano.

THE MESSAGE OF WOMEN OF FAITH FOR PEACE

At the beginning, the round table “Dialogue between faith seen from a female prospective ” was conducted by 3 women who are a true symbol of intercultural and religious dialogue:

“Launch Religion Today during the Venice Film Festival – he began Lia Beltrami – represents an important moment of union between cinema and the dialogue between faiths, religions and cultures. In 25 years we have always tried to work as a beacon of ‘cultural diplomacy’, creating bridges, relationships, broadcasting high-value films. It seemed important to us to experience this 25th anniversary by focusing on the dimension of dialogue, as the main feature of the festival we do it in Venice with a debate on the role of women of faith in building peace. Today more than ever we must return to fill the word peace with its meaning. “

“Without art, without cinema there can be no peace ” For Azza Karambelonging to the Muslim community, the arts must dialogue together, with faith as direction.“Spirituality and art represent a fulcrum for meeting and confrontation, especially in the face of the beauty of differences.” he pointed out. With their generating force, women play a key role in all of this.

Anita Evelyn Stokes Hayford he then recalled the exemplary journey of Women of Faith for Peace: leaders in 5 religious communities between Israel and Palestine that from enemies have become sisters by breaking down the walls of prejudice and finding new ways to build a real dialogue in daily life, in areas in conflict as well as in countries experiencing situations of tension.

THE RELIGIONS FOR PEACE INTERNATIONAL AWARD

The winner of the special prize “Religions for Peace International“, organization of world religious communities with over 90 national and NYC-based councils that for more than 50 years have been committed to providing effective multi-religious answers to the world’s pressing problems. The president of the BiancoNero Association delivered it on stage Alberto Beltrami with the artistic director of Religion Today Film Festival Andrea Morghen. The recognition awarded the film that most of all captured the spirit of interreligious dialogue, among the 6 films selected by the international jury composed of Eda Molla Chousein member of the Executive Committee and coordinator of the interreligious network of young people at Religions for Peace UK; Christian Kazadi Lupemba president of the Religions for Peace youth network in the Democratic Republic of Congo; Mamta Shaha secretary specialist of Gujarati Semaj of NYC involved in the Federation of Jain Association in North America.

To win the prize is “Dead Sea Guardians” from Ido Glass and Yoav Kleinmana documentary that crosses the stories of 3 young people, a Palestinian, a Jordanian and an Israeli, who decide to join forces to go beyond the conflicts of their countries and fight to save the Dead Sea.

EMOTIONS IN THE ROOM

Presented at a press conference “Emotions to Generate Change“, touching photographic exhibition of the young multi-award-winning Bengali artist Asaf Ud Daula which will be exhibited during the Festival; after the inauguration of Pope Francis in the Vatican, it touched the Davos Forum 2022 of the World Economic Forum and will soon be at the United Nations in NYC.

Projected on video trailer of the 25th edition by Religion Today, a mash up fruit of its history told by faces, stories, faiths and art; a phrase from Don Tonino Bello sums it up: “We must move from the culture of indifference to the conviviality of differences”.

Among the numerous international guests present, the producer Roberto Bessiprestigious name of American and Italian cinema, which will be at Religion Today with the docufilm “Ride back to freedom” by the Austrian director Hermann Weiskopf.

THE FESTIVAL: 25 YEARS OF DIALOGUE

Born in 1997, the Religion Today Film Festival it is now carried out by the BiancoNero Association with the aim of making a journey into differences, promoting independent cinema on spirituality and the comparison between cultures and faiths. In 25 years RTFF has become much more than a film festival: it is a laboratory of coexistence, encounter and dialoguea place where anyone can feel at home, listening to stories, looking at frames of nearby stories and distant stories, touching the meaning of ‘humanity’, in the richness of diversity.

In recent years, more than 18,000 films and documentariesthey met 2,200 artists and directors from all over the worldwhile the spectators were more than 50,000. The Festival has always wanted to have an itinerant dimension, of pilgrimage among peoples. He left Trento and stopped in Bologna, Ravenna, Rome, Camerota, Milan, Nomadelfia, Jerusalem, Teheran, Mar Musa in Syria, Cambridge, Sao Paulo Brazil, Dhaka, Kazan, Los Angeles, Thailand.

A DENSE PROGRAM OF EVENTS

Wednesday 6 September 2022 at 11.00 the program of the 25th edition of the Festival will be presented to the public with a launch press conference to the Social Theater of Trento.

The September 14 the event will open with theinauguration of the “Tenda di Abramo” in Piazza Cesare Battisti, now known to the Trentino public: the structure, a metaphor for meeting and dialogue, will permanently host the photographic exhibition “Women of Extreme Lands”, by Caterina Borgato and the many events and including 10 dedicated master classes to the young people. Already on the afternoon of Wednesday 14th that will be held of photographywith Bengali Asaf Ud Daula, award-winning international artist.

In the evening the opening ceremony of the 25th jubilee of Religion Today: al Teatro Sociale di Trento, at 8.30 pm, the Festival will be launched by an intercultural show unforgettable, to which the citizens will be invited. From the charming dance of the dervishis Sufists of the Sufi Ensemble Rabbaniyya, in the speech of director of Avvenire Marco Tarquinio, to the tribute to Lucio Dalla by the Trentino singer-songwriter Alberto Beltramito conclude with the choir of the Sosat “Dal Trentino al Mondo” and with the infinity guitar by Anthony Mazzella.

During the entire duration of the Festival the women of the movement “Women of Faith for Peace”, Golden Lion for Peace 2017 which, born 12 years ago between Israel and Palestine, is concerned with promoting interreligious dialogue and confrontation. On Thursday 15 September at 10.00, a forum will be held at the Tent of Abraham where women who now come from all continents and represent different religions and faiths will meet.

There will also be many other events that will follow in Piazza Battisti: from cultural aperitifs, to book presentations and screenings, which can be found in the dense program available online.

At the same time, al Cinema Modena and at the San Marco Theater in Trento, as well as in the other regional venues, will be screened for free 42 films and documentaries in competition, from 23 different countries and they will carry a burst of fresh air, news and meeting in the city. For the projections in Arco, Dro and at the Teatro San Marco in Trento it is possible to book until the start of the event on Eventbrite (website or app) or by email: segreteria@religionfilm.com For those scheduled instead at the Modena Cinema, info and reservations on www.cineworldtrento.it

There will also be many matinee for schoolsbecause among the objectives of Religion Today it is primary to involve the new generations and promote with them the concept of comparison and dialogue, combined with the search for spirituality.

The Artistic Director of the Festival, Andrea Morghenwill lead the event together with his young staff, bringing the heart of the events in the mountains of Trentino: the final award ceremony will be held right in the location of Baselga di PinèSunday September 18, 2022 at 3.00 pm, at the shed – “Baita del Mett”.

Religion Today Film Festival is realized thanks to the contribution of Autonomous Province of Trentoof the Trentino Alto Adige-Südtirol Regionof the Municipality of Trentoof the Cinema Directorate of the Ministry of Culture. For 2022, an important partnership has also been signed with Monturaa leading brand in the mountain and outdoor clothing sector, which through its creative laboratory and publishing house “Montura Editing” will bring its contents developed over the last twenty years and will give impetus to the activities of the Festival and its promotion even outside the regional borders.

Important, as every year, is the contribution of the Archdiocese of Trento, through the staff of the Diocesan Missionary Centerwhich with professionalism and attention manages the reception of the numerous international guests of the Festival.

The Religion Today network is one of the ingredients that most represents it. “This edition” promises Alberto Beltrami, president of the BiancoNero Association “It will see films in competition of a very high quality, as well as all the collateral events, which I hope will make a contribution to building a true culture of peace.”

Further information at the links: