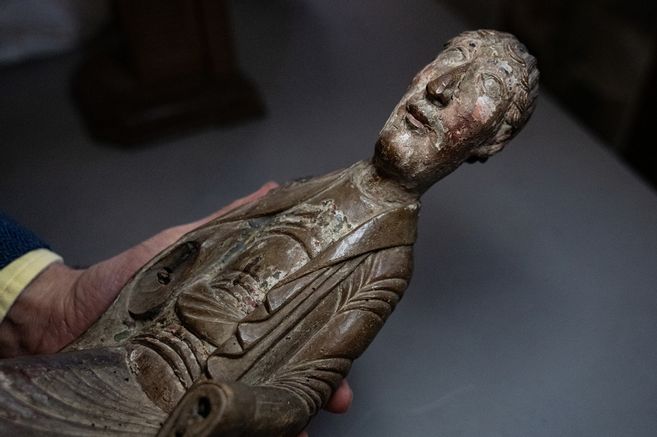 Several months ago, Master Vassy went to an apartment in downtown Clermont to carry out an estate inventory. A routine mission for this well-known auctioneer from the Auvergne capital.

“Among the objects that were ready to go on sale, a wooden statuette of the child Jesus intrigues me. She exudes a certain spirituality, but I have absolutely no idea what it is and the heiresses don’t know where she comes from. So I decide not to put it up for auction and call on an expert firm. »

The wooden statue of the Virgin is sacred

This statuette is then in the hands of Élodie Jeannest de Gyvès, member of the French Syndicate of Professional Experts in Works of Art and Collectibles. And it would seem that Master Vassy had a flair or perceived a divine sign…

Indeed, according to this specialist, the child Jesus would be the one who initially rested on the knees of the Virgin in Roman Majesty of the Saint-Julien de Meillers church in the Allier, near Moulins, dating from the second quarter of the 12th century. and a troubled past.

The latter would have disappeared before or during the revolutionary era, when the Virgin and the child were not yet separated. Then, in 1850, only the Virgin would have been found in a barrel filled with ashes. The child Jesus had disappeared… So, he was replaced with a substitute Christ. Then, in 1907, this Virgin (without her new child Jesus) was classified as a Historic Monument.

But the adventures of this sculpture do not stop there, announces the Clermont auctioneer with a smile. In 2007, it was stolen by a criminal specializing in the theft of sacred art objects. She was found some time later in the Batignolles district of Paris.

And during all these years, still no trace of the original child Jesus. Except that, about a little more than two centuries later after his disappearance, Maître Vassy made this strange discovery in a Clermont apartment…

“In order to validate the hypothesis that this sculpture of Christ was indeed a constituent element of the Virgin in Majesty preserved in the church of Saint-Julien in the town of Meillers, as indicated by the consulting firm, an appointment was organized to bring them together. When the child was placed on the lap of the Virgin of Meillers, a strong emotion seized me by the throat. There was no longer any doubt that these two parts went well together,” says Maître Vassy.

The poet Paul Eluard would have said: “there is no chance, only appointments”. This will have taken about 200 years, via an intuition of Master Vassy.
And what has the child Jesus been doing all these years? We will probably never know, because the owners took this secret to their graves…

To know
Negotiations are underway between the heirs and the municipality of Meillers who would like to buy the Child Jesus so that he can find his place on the original statue.

Unusual – Disappeared for more than 200 years, the child Jesus of the Virgin in Majesty of the church of Meillers was found in Clermont-Ferrand