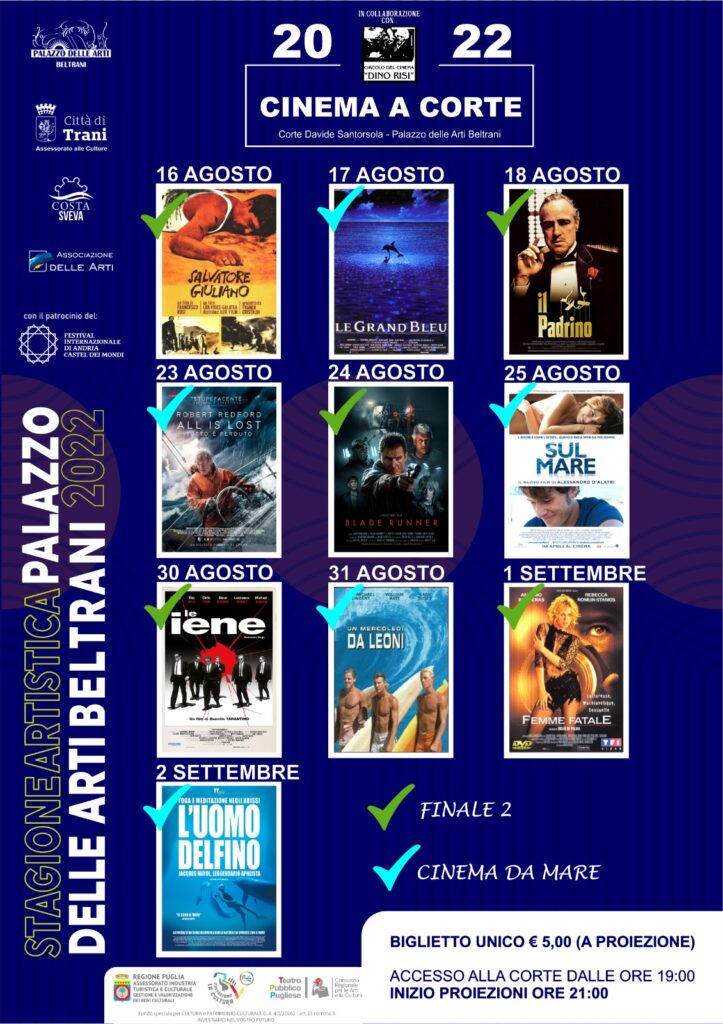 Below is the press release:

“Cinema a Corte” at Palazzo delle Arti Beltrani in Trani (BT) presents its latest films on the program. The review, which opened its doors last August 16, is produced by the Associazione Delle Arti, in partnership with Costa Sveva, with the patronage of the Castel dei Mondi International Festival in Andria, the support of the Puglia Region and the City of Trani, and in collaboration with the Circolo Dino Risi of Trani.

Between cult films, great classics of national and international film heritage, adventure and docufilm there is something for all tastes. The outdoor screenings in the evocative Corte Davide Santorsola, transformed into a cinema arena for the occasion, continue until early September. There are two main themes around which the retrospective of Cinema a Corte curated by Lorenzo Procacci Leone unravels. “I thought of two strands – explains the artistic director of the festival -: one is” Finale 2 “, linked to the celebration of some titles from the decades from 1962 to 2002, the other is” Cinema da mare “, considering the latter not only as a setting but also as inspiration.

From Tuesday 30 August to 2 September still 4 films to enjoy together with the pleasant summer evenings: “The Hyenas”, “A Wednesday from the Big Bears”, “Femme Fatale” and “The Dolphin Man”.

“Hyenas-robbery dogs”Is a cult film from 1992 (part of the“ Finale 2 ”retrospective), written and directed by Quentin Tarantino. In full “pulp” style by the American director, blood, torture, doubts, lies, wisely mixed with flashbacks and a surprising ending will be the protagonists on Tuesday 30 August at Palazzo Beltrani. An excellent and smooth editing, since the story, instead of normally unfolding in logical succession, anticipates and postpones the individual episodes in a sort of mosaic of strong effect and tension; an accurate and penetrating characterization of the bandits, never flat in their wickedness, indeed of marked vivacity in the individual personalities. The film ensures suspense, horror and interest in an incredible balance (source Comingsoon).

A film that made history closes the month of August: Wednesday, August 31st, John Milius’s “Big Wednesday” will be screened, which belongs to the genre of the retrospective “Cinema da mare”.

California beaches are sometimes battered by winds that cause frightening storm surges. They are the best opportunity for the performances of old and new surfing champions. Three of these, Jack Barlow, Matt Johnson and Leroy come to light in the summer of 1962: they are the darlings of the extravagant Bear, craftsman of the boards for this sport, former champion and philosopher. In the years that follow, the three friends set out on roads that slowly separate them. Vietnam bursts into the lives of the three young people. In the spring of 1974 the sea swells frighteningly. Bear calls the three who answer the call and face the gigantic waves, under the impressed eyes of the crowd and the new aspiring champions. It was the last triumph. They know they have marked an era, but they are also aware that their season is over. “Scanned over four times, which are four famous waves, it looks like a film about surfing, but it is instead a film about the virile friendship of an American generation marked by existential malaise and the Vietnam War” (source Laura and Morando Morandini, Telesette) .

Thursday, September 1st for “Finale 2” the 2002 film by Brian De Palma “Femme fatale”. The thriller – as claimed by the film critic Giancarlo Zappoli – is a tribute to the classic French noir, but is also affected by certain rarefied atmospheres of Michelangelo Antonioni of Blow-up. A paparazzo, played by Antonio Banderas, photographs a beautiful girl involved in a sensational heist. The woman, the femme fatale played by Rebecca Romjin-Stamos, is immortalized on the cover of the magazine. Some Parisian gangsters recognize her as a person, believed dead, with whom they have unfinished business. The time has come to adjust them. The beautiful woman begins to be hunted down and then she decides to involve in her adventures also the photographer who troubled her.

The Cinema a Corte 2022 review closes on Friday 2 September with the documentary by Lefteris Charitos “The dolphin man” for ‘Cinema da mare’. The 2017 film is a reverent portrait of the legendary Jacques Mayol, a monograph in images of the freediving record holder, globetrotter, handyman, seducer, scholar of marine mammal behavior and curious about Zen spirituality. His name, in fact, has experienced a peak of popularity with Le grand bleu, Luc Besson’s blockbuster film at the French box office and already screened on August 17th for Cinema a Corte. Beyond the records, an advanced conception of the relationship between man and nature. To be remembered – as the film critic Raffaella Giancristofaro points out – is the attention dedicated throughout his life to the similarities between the human and marine dimensions: his ‘recognizing himself’ in a cetacean, which earned him a nickname that has fascinated many, the dolphin man indeed. There is no shortage of followers in the film, such as the Italian Umberto Pelizzari. Thanks to the many excerpts from film in film and memories, you can breathe the spirit of an era in which sport was less performative and the figure of a bohemian athlete, a lover of life yet lonely and bizarre, takes shape. the film argues the reasons for its continual re-launching of the physical limit, derived not from superhomism, but from the drive to search for an inner balance, in the act of transcending bodily gravity. Towards an amphibious dimension, pacified with the idea of ​​failure and death. In a total, harmonious fusion with the silence of the depths.

At the conclusion of Cinema a Corte 2022, Sunday 4 September, a concert that will be a real journey with sounds and images of the well-known and lesser-known masterpieces of the great Maestro Ennio Morricone: “Cinerama… inspiration”. We will go from western to comedy, from lounge and light music to the most famous soundtracks in a succession of rare emotions. An exceptional formation will perform the master’s masterpieces: Antonio Piccialli on the piano, Giambattista Ciliberti on the clarinet, Luciano Palmitessa on the trumpet, Luca Lorusso on the drums, Giovanni Astorino on the cello. Some of these extraordinary musicians have had the privilege of collaborating and playing in Bari in the orchestra directed by the great Oscar winner Morricone. To embellish the instrumental formation there will be the participation of Francesca Lamberti, a young and talented singer from Puglia.

Admission at 20.30 – start of projections at 21.00. Tickets (cost 5 euros) can be purchased at the box office of the Palazzo delle Arti Beltrani starting from 19:00 on the day of the film screening.

In case of adverse weather conditions, the projections will be held inside the Beltrani Hall.