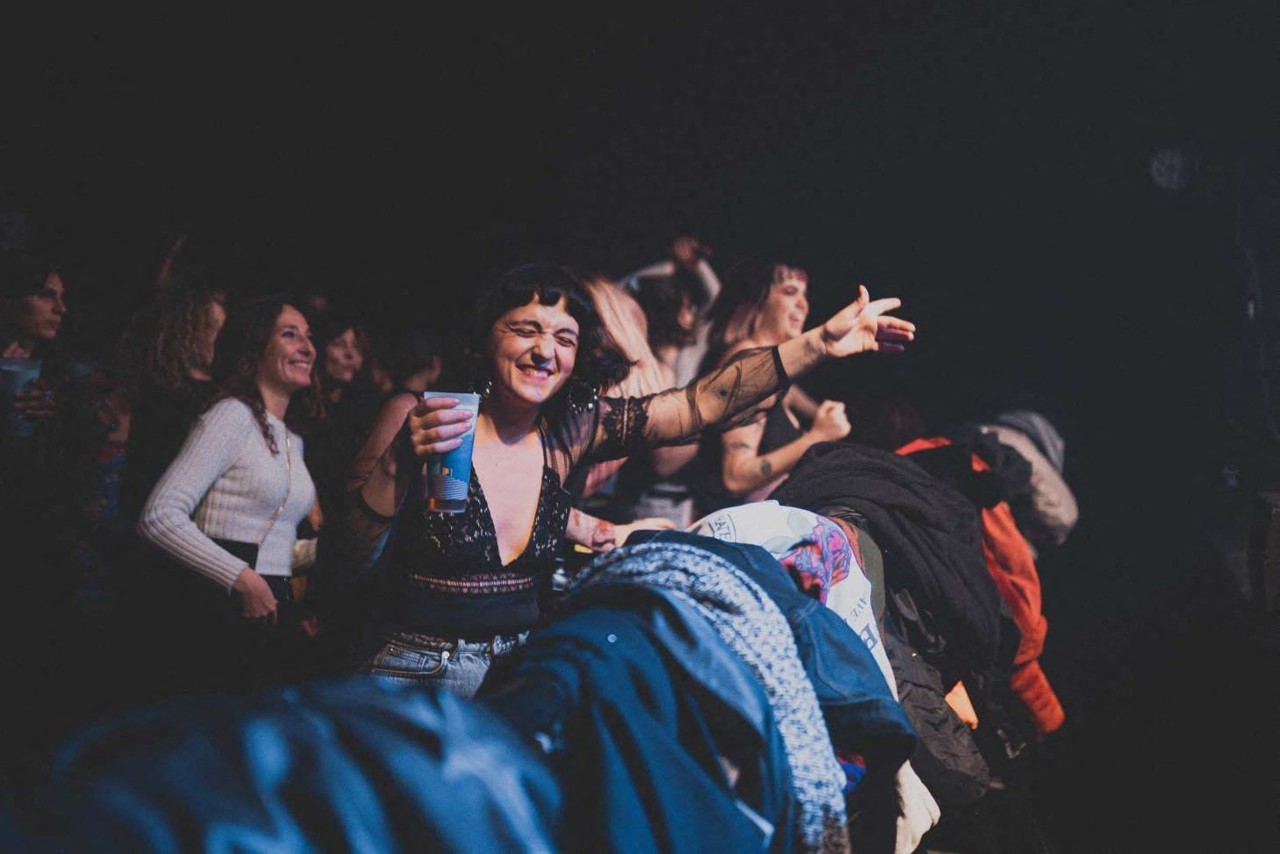 Led by the association La Petite, the Girls Don’t Cry Festival arrives for a second edition at Metronumthe current music room of Toulouselocated in the Borderouge district.

Four days of celebration at the Métronum

“A true ode to celebration, a little setting of warm benevolence on Girls Don’t Cry Festival it’s an opportunity to give free rein to all your desires, to be yourself without any constraint and to find your fellows for a weekend”, underline the organizers, who promise festival-goers “concerts exhilarating”, “shattering encounters”, “performances” or even “exhibitions”.

The festival is intended collaborative, since it was co-built by La Petite teams and a group of volunteers. And engaged in fight against gender-based and sexual violence thanks in particular to the implementation of the strong hand device“so that everyone feels comfortable and safe there”.

To give you an idea of ​​the atmosphere, here is a summary of the first edition of the festival, which took place in 2021:

Here are the artists scheduled for the Girls Don’t Cry festival in Toulouse.

“Artist based in Toulouse, is passionate about musical identities that break aesthetic boundaries without pressure. Between bass music, hard dance, hip hop and jungle, without forgetting a big ambient and trip hop culture, 130E0A cultivates sidesteps and keeps in mind two things essential to any musical-festive experience: the movements of the pelvis and the spiritual permanence. . Her productions, which she refines in the shadows, fit perfectly into her wild DJ-sets, where unstructured rhythms and massive basses rub shoulders with more poetic universes, between dream and light”.

“No one on this planet sounds like Aisha Devi. Her voice is her most powerful instrument in a repertoire that includes hard-hitting beats, seraphic and guttural chants, mystical linguistics and bodily sounds. Born in the Swiss Alps and with a Nepalese-Tibetan heritage, she has forged a transversal identity, guiding both her personal and creative process, making her a maverick researcher. She made her signature by disrupting pop culture.”

“Anaco is originally from Bilbao and now established in Paris. DJ and resident on Rinse France radio since 2018, she hosts a monthly show through which she expresses her varied musical universe. Strongly influenced by the club culture of the 90s (jungle, footwork, ghetto tech, uk garage, reggaeton…), his style is also nourished by contemporary scenes, always more creative in mixing genres. Driven by the desire to sculpt unique atmospheres and moments, Anaco is known for her sets in which she plays with time, as with bodies and minds”.

“Queer performer, DJ and producer, the Ugandan Authentically Plastic breaks the codes by offering music that is both dark and playful, while brilliantly integrating different musical genres such as Kwaito, Gqom, acid and techno, all largely influenced by the electronic rhythms of Northern Uganda.

After having made her debut as a dj in secret queer raves, she played for the first time at the famous Nyege Nyege festival in 2019. Authentically Plastic is at the origin of ANTI-MASS, a bimonthly evening in a club in Kampala , which gives priority to female and queer artists, and which, as its name suggests, refuses to fit into the mould”.

“After 15 years behind the decks, Clara 3000 is an elusive and transversal figure on the electronic scene. Combining perpetual mutation and authenticity, the sound of Clara 3000 is rooted in a multitude of soundscapes, real or imaginary. Mastering the art of breaking codes, his sets play with rules and genres, enriching themselves with various techno, post-dance, ghetto and experimental influences. The only rule is that there is none”.

Berlin-based Zambian-Dutch DJ and producer Happy New Tears produces electronic music to comfort her melancholy self. His sets are an invitation to dissolve into a sound universe filled with atmospheric and emotional genre-defying music. It is affiliated with the parties and the Dj No Shade training program for women and gender-minority people.

“Iku is a visual artist and musician based in Berlin. His audio work carefully layers and weaves related samples into a complex tangle of emotionally charged sounds, creating a sensory mesh of hypnagogic piano progressions, alien insect sounds and horror movie soundscapes. She has released three EPs and has been featured on various platforms and labels including Creamcake (Berlin), AQNB (London/LA), Amen (Vienna).

“Born in 1988 in Paris, Imer6ia develops her practice of electronic music while simultaneously pursuing a career as a visual artist in digital arts (3D and special effects). After several releases of titles noticed by independent labels, she develops her first album, which she develops with the musician Canblaster and the French label LaVibe. Gravitating between futuristic pop, electronic, ambient and techno music, his music moves towards immersive and cinematic experiences”.

“Brazilian-born producer and singer LYZZA has always been keen on challenging boundaries – she carved out a place for herself in the nightlife scene from the age of 16. After breaking through in 2017 with the experimental club bangers of his debut EP, ‘Power Play’, the artist proved his vocal and lyrical prowess in his subsequent pop-leaning EPs ‘Imposter’ and ‘Defiance’, which tackle personal matters. of heartache and longing with bite. Whether she’s traversing the smoky world of club music or rolling out an intimate pop ballad, one thing is certain: LYZZA is a force to be reckoned with.”

“Animated by the desire to hack the binary system, Trinity spins around 150BPM to marry melancholy trance and acidulous roars, cavernous kicks and ethereal hymns, solemn resonances and damaged basses. A queer artist, Trinity strives to make the dancefloor a place of healing, a collective skin”.

“Eric Oliveira aka xd_Eric, 23 years old, born in São Paulo. Artist Eric has an endless passion for the arts. His passion for music started with the influence of his family. “I have uncles who are DJs and I always thought it was great”. His research in sound comes from peripheral Latin rhythms, from Brazilian funk to Colombian neo perreo, including many other elements that set Latin America on fire. She is a co-founder of the Chernobyl collective in São Paulo”.

Yasmine of the Stars

“Yasmine des Astres, experimental artist, welcomes you into her nocturnal universe. Definitely attached to romance, her universe oscillates between thorns and rose petals. She invites you to enter her music as two lovers would enter a forest under the brilliant midnight moon, to run in the nebulous flora and get lost in it to the point of excess. Her research focuses on the intensity of desire as a liberating and enlightening force. Guided by the secret of intuition, she tries through her music to make the sensible dominate and make reason extinguish”.

“Born in Ghana, raised in London and now based in Berlin, Yazzus is a DJ/Producer, with a strong taste for energetic dance music, full of bounces, and offering different textures and tempos. Drawing inspiration from the hardcore rave scene of the early 90s and other varied sources such as video games, she has created a raw and avant-garde contemporary sound, mixing rhythmic techno, gabber, ghettotech and many more. . Since her arrival in Berlin, she has developed a style of groovy and rhythmic techno by joining the underground queer parties Mala Junta, as the last resident”.

Girls Dont Cry Festival
From November 24 to 27, at the Metronum
Full program and ticketing on the festival website

Was this article helpful to you? Know that you can follow Actu Toulouse in space My News . In one click, after registration, you will find all the news of your favorite cities and brands.