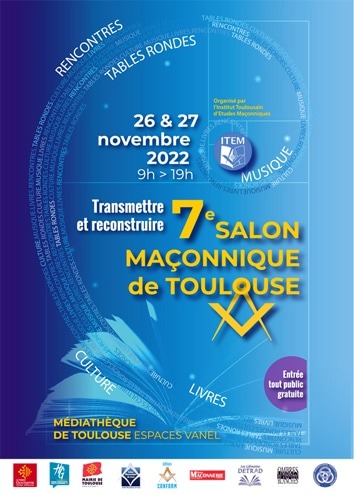 The 7th edition of the Masonic Salon of Toulouse brings together renowned authors, designers and philosophers around the theme: “Transmitting and Reconstructing”

The Toulouse Institute of Masonic Studies – with the support of the Town Hall of Toulouse, the Departmental Council of Haute-Garonne, the Regional Council of Occitanie and in partnership with the bookstores Ombres Blanches (Toulouse) and DETRAD (Paris) – offers two days of meetings and reflection.

On the program: 11 conferences or round tables, major contributors to contemporary thought, the forum of the Grand Masters of the various Masonic persuasions, 2 exhibitions and a jazz “musical conference” to close the event.

Freemasonry lives and questions what was, what is, to imagine and participate in what will be.

It is in the current context of health, food, societal and international crises that the 7th Masonic Salon of Toulouse has chosen two of the main themes of its traditions: TRANSMITTING AND RECONSTRUCTING.

“Transmit and rebuild what unites beings only!” Transmitting the art of building and rebuilding footbridges or bridges by refusing walls and ramparts” specifies Gérard Soulier, Commissioner General of the Masonic Salon of Toulouse. He adds “The objective of this bi-annual show is to show something other than the current publications of the chestnut news magazines which in general denigrate Freemasonry. We want to show that the subjects that unite us are highly topical and that we deal with them with the best thinkers, be they philosophers, historians, economists, artists or sportsmen.

Francis WOLFF, Philosopher, Emeritus Professor of Philosophy at the École Normale Supérieure, will speak on the theme The Reason of the Universal. It will be moderated by Jean-Pierre MAYEUX, philosopher and former rugby player.

“Above opinions, moral or religious convictions, all equally respectable, above differences of community or culture, there are universal values: reason, science, the equality of all human beings, etc These values ​​today are in bad shape: we are witnessing, on the right, the rise of nationalism and, on the left, the rise of identity claims. We always make the same case for the universal: it would be standardizing, oblivious to differences and feelings of belonging; or it would only be the mask of the interest of the strongest, it would deny the opposition of the dominant and the dominated. These criticisms are often relevant. It must therefore be answered. We must also show that universal values ​​have lost none of their emancipatory power. But on what can we base these values ​​and in particular that of humanity, when we can no longer rely either on a revealed God or on an equivocal nature? What weapons remain today to reason? »

Emmanuel KREIS, Historian and Author, will speak on the invention of the Masonic plot and Sylvain PIRON, Historian Specialist of the Middle Ages, on Liberalism, biblical myth.

Yohann CHAPOUTOT, Professor of Contemporary History at the Sorbonne, Specialist in Germany and Western modernity, in his conference on Management, a natural child of Nazism? will underline in particular a continuity between the organizational techniques of the Nazi regime and those found today within the company.

Pierre MOLLIERDirector of the Library of the Grand Orient of France, Curator of the Museum of Freemasonry and Editor-in-Chief of the magazine Renaissance Traditionnelle, Yves SAEZ, Essayist and Lecturer and Jacques OREFICEwill question The nature of the symbol in Freemasonry.

Celine MARTY, Associate Professor of Philosophy and Doctoral Student in Philosophy will return to the work of André Gorz; a Freemason without an apron!

Jacques RAVENNEAuthor and Screenwriter, will tell How Freemasonry Conquered the Detective Novel… or the reverse?

Olivier BETOURNE, historian and author of numerous books on the French Revolution, during the conference The founding myths of the Republic, will defend the idea that “The Republic is first and foremost an idea. And if this idea was embodied in the institutions of five successive republics, the memorial story that carries it is unique, both a philosophical doctrine and a product of history. And it is under this double dimension that it is advisable to explore its principal myths of foundation… To plunge into the turmoil of the debate of ideas which inflamed the end of the XVIIIth century, to observe the action of the men who carried them in the name of the common good is the best way, no doubt, to take stock of the responsibility that is ours, we who have inherited it.

This 7th edition will end with two convivial moments:

An exchange on Rugby and Fraternity led by Jean Abeilhou, Guy Lafitte and Pierre Hournarette – and a “musical conference” around jazz and spirituality, with Jean-Marc PADOVANI (saxophonist), François BECK and Thierry GONZALÉS (pianist).

Exhibition of François BOUCQ and conference on Freedom of expression

From November 10 and until November 27: opening of the show with an exhibition “Trace de Liberté” by François Boucq at the José Cabanis Media Library – News Center.

Proposed by the Institute of Masonic Studies in Toulouse, this exhibition around freedom of expression shows the courtroom drawings from the Charlie trial, and some other works from the artist’s comic strips.

François Boucq, recognized as one of the greatest current French designers, explores the various variations of plastic and narration. He has been awarded multiple prizes, including the prestigious prize of the comic strip festival in Angoulême.

(Opening Thursday, November 10 at 6 p.m. in the presence of François Boucq, followed by a meeting time in the Grand auditorium of the José Cabanis Media Library).

A conference on the theme “Freedom of expression under pressure” with Doctor of Political Science Denis Ramond will complete this sequence at the Media Library on November 23 at 6:00 p.m. (Media Library auditorium). A word about Denis Ramond (see PJ)

Practical information on the 7th Masonic Salon of Toulouse

Detailed program of the Show and biography of the speakers

About the Toulouse Institute of Masonic Studies (ITEM)

The 1901 law association, based in rue de L’Orient in Toulouse, created in 1999, has 800 Masons this year. Its main objects are the enhancement and conservation of the Masonic heritage of the Toulouse region. Within the framework of its activities of externalization of the Masonic order, the ITEM organizes every 2 years The Masonic Salon of Toulouse. This event, unique in France, is open to all audiences and free.

Toulouse: Come and discover the universe of the Masonic world. An appointment not to be missed