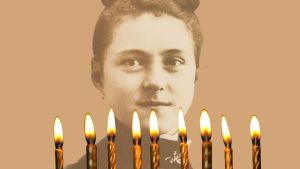 It has been 150 years since she was born who would become Saint Thérèse of the Child Jesus and of the Holy Face. Quebec poet and writer Jacques Gauthier, author of “Thérèse Martin, a fabulous destiny” (Part One, 2022), is delighted with the public tributes surrounding the event, but recalls that it was Jesus alone who gave value to his actions.

Thérèse Martin was born in Alençon on January 2, 1873. Whether we call her little Thérèse, Thérèse of Lisieux or Thérèse of the Child Jesus, the “greatest saint of modern times” has not finished being talked about. Cherished child of the Church and of the world, she said shortly before her death on September 30, 1897: “You will see, everyone will love me. Since then, she has spent her heaven doing good on earth. Canonized in 1925, she was declared patroness of the missions two years later, then secondary patroness of France in 1944, with Joan of Arc.

The French State, supported by Italy and Belgium, presented the candidacy of its illustrious citizen to UNESCO in order to mark the 150th anniversary of her birth in 2023. It will also be the 100th anniversary of his beatification, on April 29, 1923. The Conference of Member States of Unesco has accepted and inscribed his name among the sixty-seven personalities from several countries who are celebrating their birthdays in 2022-2023 and who have worked in the fields of peace, education, science and communication. This recognition by the secular world is a great opportunity to learn more about the life and writings of Thérèse, a woman of peace and culture, an educator and communicator in her own way. His Story of a soula masterpiece of spirituality translated into more than 80 languages, has set the hearts of millions of readers on fire around the world.

Love alone attracts Thérèse: a love that abandons itself, that forgives, that marvels, that “chooses everything”.

In 1997, John Paul II declared the young Carmelite Doctor of the Church, nicknaming her “Doctor in the Science of Love” because of the novelty and universality of her “little way” of spiritual childhood. This way of holiness for all is lived in the “reality of life”, through the little things of everyday life. Love alone attracts Thérèse: a love that abandons itself, that forgives, that marvels, that “chooses everything”. “It is trust and nothing but trust that should lead us to love” (Letter 197). For Unesco, “the celebration of this anniversary will contribute to giving more visibility and justice to the women who have promoted the values ​​of peace through their actions”. But for Thérèse, it was Jesus alone who gave value to her actions:

“Jesus does not teach me to count my deeds; He teaches me to do everything out of love, not to refuse Him anything, to be happy when He gives me an opportunity to prove to Him that I love Him, but this is done in peace, inabandonmentit is Jesus who does everything and I do nothing” (Letter 142).

Thérèse’s great desire is to love Jesus and to make him loved, on earth as in heaven. Isn’t that also what she wishes for us in this year 2023 when we honor her 150th birthday? A careful reading of her writings shows that these three words, “desire”, “love”, “Jesus”, are those she uses most often. His spirituality cannot be summed up in a particular practice or virtue, but in a fundamental intention of the heart which manifests itself in a trusting openness to the action of God and in a burning desire to live with love.

She remains for all the saint of small steps, of empty hands, of the hearts of children for whom “everything is grace”.

“The soul of Thérèse of Lisieux is a little girl who pulls God by the sleeve”, wrote the poet Christian Bobin in The Ruins of Heaven. Her practice of love has inspired people as different as Georges Bernanos, Dina Bélanger, Edith Piaf, Jean Guitton, Elisabeth of the Trinity, Maximilien Kolbe, Edith Stein, Marcel Van, Marthe Robin, Mother Teresa, Pope Francis… She can also join the young people of today in search of hope by his gentle and joyful way of welcoming his frailties and his imperfections which open him to divine mercy. Thérèse of Lisieux, woman of culture, education and peace? Surely. But she remains for everyone the saint of small steps, of empty hands, of the hearts of children for whom “everything is grace”.

Thérèse of the Child Jesus, 150 years of love