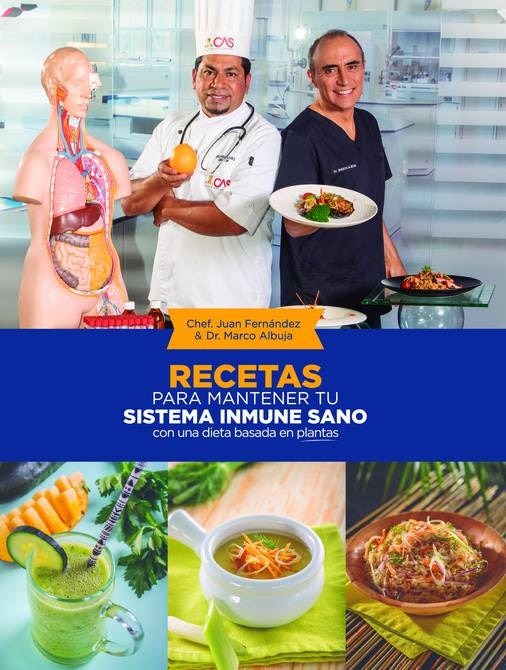 listen to the jingle of Towards a new way of life leads us to think of the face that accompanies it, that of the Doctor Marco Albuja Chavesand in the program that he has hosted for 25 years on various Ecuadorian channels and that is currently on Ecuavisa (Saturday at 09:30 and Sunday at 08:30), as well as on his own channel Youtubewhere he has more than half a million subscribers.

The 55-year-old doctor from Quito has dedicated himself to sharing his professional practice with health broadcasts on national television. He entered to study Medicine at the Central University of Quito, and transferred to the University of Montemorelos, in Nuevo León, Mexico. Upon returning to Ecuador, he dedicated himself to revalidating his title in the same place where he had started.

While in the country, something interesting happened to him. “I was invited to give a talk, and people were hooked; Over an hour and they were still sitting. And my mom told me: “Hey, what you do is interesting.” I started in radio ColonThen in Teleamazonas (a segment in Vanities TV) and, after three years, in 1997, I proposed to them to make a program: Towards a new way of life. Last November we turned 25″, several of them in CT Televisionbut most of the time Ecuavisa.

Dr. Albuja assures that he does not divide between being a doctor and a television personality. “I do not divide, for me TV is a job, I didn’t go there to become famous”, he affirms, because he knows that fame has a weight; that’s why, there are no cameras in his house and in his office. “But I am very grateful, first, to God, who gives me this opportunity, and that affection that people have for the work and for what we have done. What I like is that I can reach a lot of people with information that will help them, in different cities and countries”.

Now his knowledge has spread to virtual platforms and social networks: in addition to YouTube, he is in Facebook, TikTok and Instagram, spaces in which, in general, the followers express their approval and the detractors rain down criticism. Although most of the accounts of people or public institutions have a very high level of negative comments, the opposite occurs in those of Dr. Albuja.

“Do you know what the problem is? That maybe I got used to that. When we were in a pandemic, we made programs and content, and more people got into our social networks. Obviously, there were people who criticized us, and loud, but I took my oldest son’s advice: ‘Daddy, you have more than two thousand people who praise you and one or two who criticize you, and you get depressed by those two?’ It was like God told me: ‘Hey, there’s also this, learn to handle it, because not everyone is going to like you.’ Then, I receive criticism in two ways: if it is constructive, I revise and make changes; if it’s for harm, I’ve learned to ignore and ignore”.

In the medical centers of Dr. Albuja, in Quito, care is provided in multiple specialties, and the first of them is healthy lifestyle consulting. Those who decide to follow the treatment are prescribed a plant based diet. It is at this point, the doctor shares, that many comments “jump”: “And protein of animal origin?!”

No problem, he assures. Criticism in the professional field is welcome. Albuja mentions doctors such as Walter Willet, professor of epidemiology and nutrition at Harvard, Boston, and Beth Frates, expert in lifestyle medicine at that university, where the Ecuadorian is doing two certifications. “They say that, For this form of nutrition to penetrate the South American public, it will take 20 or 30 years”.

Until that moment arrives, he dedicates himself to the investigation. With the expert in statistics and mathematician David Vera Alcívar (also a patient), they developed the study Clinical profile of patients before and after a program of diabetes reversal in Ecuadorpublished this year in Journal of the Faculty of Human Medicine, from the Ricardo Palma University.

“This is statistically significant: the changes cannot be due to chance, but rather the impact of lifestyle changes. Our job is to educate the public,” she prioritizes; “and, eventually, when doctors ask us for information, we send scientific articles on which our treatments or educational proposal are based”.

How do you keep up to date? “The public reinvents the program, asks for things, and you follow that wave.” The difficult thing is to put the information in a didactic language, easy to understand; “I think that’s where the success of Towards a new way of life”.

The principles of health education

True to the line of his program, Dr. Albuja is certified in Lifestyle Medicine (Ricardo Palma University, Lima), branch of traditional medicine focused on changes in the way of eating and living; It is not an alternative or natural practice, but rather adheres to treatment protocols.

“When we receive a patient, we do tests and see if he is diabetic, hypertensive, obese, has high cholesterol or high triglycerides.” The first approach, according to Albuja, is changes in lifestyle. In cases where this does not work, it will go to the next level, the use of medication, and healthy living becomes an accompaniment.

But what excites the doctor is to see how many of these people do not need to resort to medication when there are sustained changes in their daily lives. “They can stay like this all their lives as long as they maintain good habits”; and even more, “patients who have already been taking medication have a remission or reversal of the disease”.

Reversion it does not mean healing, but the disease regresses instead of progressing; and it is not a matter of magic, since the follow-up is carried out by multiple specialists. “It is clinical treatment through habitsbut above all education, so that the person knows what to do from then on and stays attached to what he learned and preserves his health”.

The first statement that Dr. Albuja makes from lifestyle medicine is that chronic non-communicable diseases are not, for the most part, hereditary, despite what is believed. “If your mom is diabetic, are you going to be diabetic?” The answer is not in the genes, says the doctor, but in the environment. “Genetics contributes only 5-10%. And the rest of what is passed on are bad habits. If I get to have diabetes (type 2) it is because I inherited habits”.

The proposal is that the person, regardless of their family history of diabetes or hypertension, manages to change their habits with a medical prescription of exercise and a plant-based diet, with whole or minimally processed foods and without products of animal origin, without alcohol and without tobacco. So you can change his story.

Albuja insists on the medical prescription of exercise, and not skipping lifestyle changes in favor of medication. Nor is he in favor of suggesting that the patient “eat everything, but little”, or that he “walk”, because this leaves him to his own devices, wondering what “eating everything” means, what “little” is or how much walking: Fast or slow pace? Climb hills? Every day? How long? There has to be precision.

Third principle: sleep hygiene. “It is now very clear that people who do not sleep early will not lower their glucose and will need more medication. Those who don’t sleep two hours before midnight are missing out on health genes that only turn on at night; genes that repair DNA, anti-cancer genes, which don’t work well when a person doesn’t get enough sleep. Late sleepers don’t produce the nitric oxide that helps dilate arteries to lower blood pressure.”

What is the best time to start and when is it late? “We have patients who, after 10 or 12 years of diabetes, incorporate the changes, and the body responds.” “If the heart is already large or the pancreas is very damaged, certain changes can be made, but it will not be the same as a person who has 5 to 6 years of diabetes or recent hypertension. In our patients who start with insulin, after two weeks the glucose falls, and after eight weeks insulin and metformin are stopped, which is the treatment gold standard”.

Thus, says Albuja, complications are avoided. “The patient spends less, the country spends less, it avoids blindness and kidney failure, amputation of a leg, heart attack, stroke… It is the least expensive medicine and the one with the fewest side effects over time.”

Dr. Albuja’s healthy habits and how he overcame the fight against high cholesterol

How does Dr. Albuja take care of himself? His habits go hand in hand with what he teaches. He has been eating a plant-based diet for several years, barring eventualities, when he visits the beach with his family once or twice a month.

“It has helped me a lot. I had problems with high cholesterol, which did not go down; then i understood. If the main cause of disease, mortality and disability comes from what we eat, we have to know how to tell the public what to eat; not (tell him): ‘Eat everything, but a little’.

His other pillar is sleep. “Sleep early. I am half a fanatic in my house: half past nine I am sending everyone to the chicken coop; maximum (at) 10 the lights and cell phones are turned off; to sleep everyone ”, he asserts. Added to this is exercise. “I just got home from the gym.” He does resistance or strength work every day.

And in the category of “very important” he puts spirituality. “I try to be a Christian, I try to be a good child of God. Every day I fight, and in that fight God has generated a very beautiful hope in my heart”. Since the pandemic started, Towards a new way of life close each episode with a “dessert”: take an excerpt from the Bible and offer peace. “God has changed my life. Do you think I’m going to be able to sustain a 25-year program with all my mistakes, problems, blunders? I believe that God has sustained the project that he believes is good, and has used this man to continue doing it.”

Who works with Dr. Albuja?

In addition to his medical colleagues, there is a new team of young people who manage the website and networks. They opened a TikTok channel for her eight months ago, and there she has learned some of the skills to go “live” (“like the famous collaboration”, she says, remembering the hilarious visit to the TV show). youtuber Ecuadorian Nancy Risol).

One of the most recent collaborations came off the screen and became a book. Together with chef Juan Fernández he has composed Recipes to keep your immune system healthy with a plant-based diet. “This book wants to make life easier with very healthy things and delicious food that is easy to prepare. There is a world to discover.” (YO)