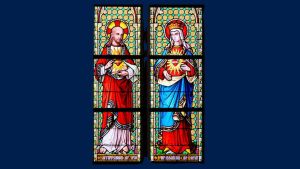 On the occasion of the feast of Our Lady of Sorrows, celebrated on September 15, discover the rosary dedicated to the seven greatest sufferings endured by the Virgin Mary.

She is called the “Mother of Sorrows”. The life of the Virgin Mary was a “painful journey” from the moment Simeon said to her in the Temple: “And you, your soul will be crossed by a sword” (Lk 2, 35). But Mary did not suffer only with her crucified Son, she suffered throughout her life and in the end united with Jesus in the pain of men for their redemption. The “seven Sorrows” refer to seven particular events, recounted in the Gospels, which made the mother of Jesus suffer. Here is a rosary which makes it possible to meditate on them.

3why pray to him

The Virgin Mary spoke of her Sorrows in certain revelations recognized by the Church. Thus, in the 14th century, she promised Saint Bridget of Sweden to grant special graces to those who meditate on her Sorrows: peace in their families, illumination of the divine Mysteries, consolation in their sufferings, their requests granted (if they do not oppose the will of God), defense against the devil, assistance at the time of death, eternal joy in Jesus and Mary.

In 1982, Our Lady spoke of the Rosary of Seven Sorrows in certain apparitions in Kibeho, Rwanda. “What I ask of you is to repent. If you recite this Rosary, by meditating on it, you will have the strength to repent,” she declared to Marie-Claire Mukangango on May 31, 1982.

It is recommended to pray the Rosary of Seven Sorrows during the month of September, especially on the 15th, on Fridays throughout the year and during Lent.

The rosary of the seven pains consists in meditating on each pain of the Virgin as one would do for a mystery. We begin with the seven groups of seven grains. On the medal, we state the mystery, the title of the pain inflicted on Mary. Here are the Seven Sorrows, in order:

Pray for us, Virgin of Sorrows, that we may be worthy of the promises of Jesus Christ.

We end the rosary on the three beads from the beginning. We recite three I salute you marie and one Our father on the main medal of Our Lady of Seven Sorrows.

There are different ways to recite this rosary. One can, for example, before beginning the rosary and/or at the end, recite the beautiful prayer Stabat Mater Dolorosa.

5Pope Francis likes to pray the Seven Sorrows of Mary

During his homily at Mass at the Sainte-Marthe residence on Friday April 3, 2020, Pope Francis confided in praying often the Seven Sorrows of the Virgin Mary. “It does me good, late in the evening, when I pray the Angelus, to pray these Seven Sorrows in remembrance of the Mother of the Church, Mother of the Church who in so much pain gave birth to us all said the Bishop of Rome, inviting the faithful to pray to the Mother of God.

The Rosary of the Seven Sorrows of the Virgin Mary