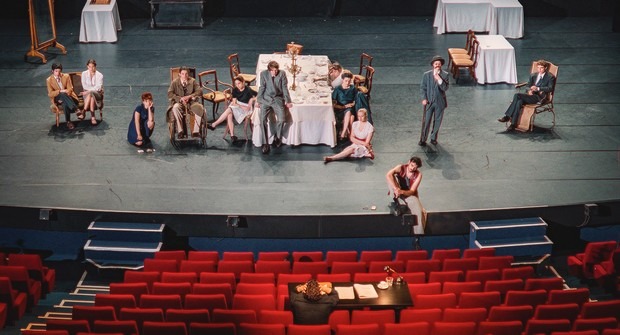 It is difficult to grasp the unifying theme of this cinema Wednesday, nestled in the heart of the month of November. Although the releases of the day do not look like much at first glance, they contain many proposals for cinema, free and iconoclastic, contemplative and explosive. And above all, they are both a faithful and multifaceted reflection of our time, on the way to an uncertain future. In short, faced with the gloom in the weather, finally in keeping with the season, we can only strongly encourage you to go and discover these films with an independent spirit in theaters, instead of locking yourself up at home with the first comer of the services of online video as the only company!

Difficult, even very difficult therefore to make a first reduction of the abundant choice of films on display this Wednesday! Without claiming any exhaustiveness or representativeness, here are our four (!) favorites of the week: to calm our bad social conscience, the drama with the revealing title The Committed by Emilie Frèche and the documentary about no less on the agenda First emergencies by Eric Guéret should do the trick. Then, in order to explore at a high cinematic level the world of theater and the world that is running to ruin, we also recommend the new films of Valeria Bruni Tedeschi (The Almond Trees) and Bertrand Bonello (Coma).

Perhaps the only thing most of the other new films have in common would be the privileged place they reserve for female characters. Indeed, you will be spoiled for feminist choice between the photographer on the grounds of hardly across the planet in the Spanish animated film Black is Beltza Ainhoa of Fermin Muguruza, the Iranian mother who seeks to shelter her baby from prying eyes in Just one night by Ali Asgari, the revolt of the African nannies in the lightest The women of the square by Julien Rambaldi and the headlong rush in the face of illness in More than ever by Emily Atef.

On the male side, things look less bright and confident. Our favor then clearly goes more to the prison drama Ariaferma by Leonardo Di Costanzo, the director of The Interval and of The Intruderand, ultimately, to the journey of the gangster in Crackling under the neon lights of FGKO – undoubtedly the most poetic title of the week, even of the month – than towards the funny spiritual quest of Gad Elmaleh in Stay a bit and the thousand and one attempts to redeem a romantic behavior of Alex Lutz in … A romantic comedy by Thibault Segouin.

Three beautiful pearls of the cinema of yesteryear are also making their big comeback in cinemas this week. The first two come out on the occasion of the hundredth birthday, yesterday, of the Italian director Francesco Rosi who left us in January 2015, but whose films continue to resonate to this day. This is true in an almost tragic way with the poignancy Hands down on the city and its plot around an urban construction site that buries workers. What a strange programming coincidence, just a few days after the collapse of the two buildings in Lille! Fortunately, the French magistrates are doing quite well, unlike their Italian colleagues, murdered one after the other in the intense exquisite corpses with Lino Ventura at the top of his game, between goodbye chicken by Pierre Granier-Deferre and Jail by Claude Miller.

Then while waiting for all kinds of tributes that are being prepared around Bertrand Tavernier, including a retrospective at the Cinémathèque Française from mid-February 2023, we are delighted to finally be able to see one of his films again in all its glory. the most beautiful and atypical, the American journey to the rhythm of jazz better known as around midnight with the excellent saxophonist Dexter Gordon!

The women of the square by Julien Rambaldi (France, Social comedy, 1h45, distributed in 402 prints) with Eye Haïdara, Ahmed Sylla and Léa Drucker

More than ever by Emily Atef (Norway, Drama, 2h02, distributed in 109 prints) with Vicky Krieps, Gaspard Ulliel and Björn Floberg

Hands down on the city (1963) by Francesco Rosi (Italy, Political thriller, 1h41, distributed in 8 prints) with Rod Steiger, Salvo Randone and Guido Alberti