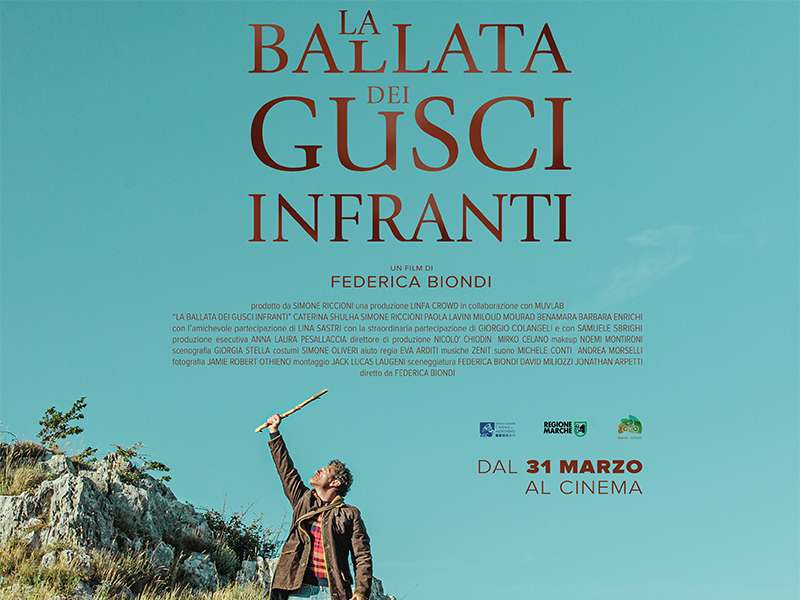 It is 2016 and in the frame of Sibillini Mountains four families live. At the center of the story is Jacopo, who wanders through the woods quoting Dante Alighieri and paying homage to the beauty of nature every day. He is the son of Alba and Dante, an actress and a playwright who live in a house on the Marche Apennines, loving each other as if it were the first day. A few kilometers away from her lives Lucia, who, as soon as she is abandoned by her husband, finds herself managing a farm on her own; while to start a new chapter of their love there are David and Elizabeth, waiting for the firstborn. The latest arrival is Don Ghali, a young African parish priest who has come to manage a small parish.

‘The ballad of the broken shells’ (supported by Confartigianato and the Marche Region), played by Simone Riccioni (who is also a producer with ‘Linfa Crowd 2.0’), Caterina Shulha, Paola Lavini, Miloud Benamara, Barbara Enrichi, Samuele Sbrighi, and with the participation of Lina Sastri and Giorgio Colangeli, directed by Federica Biondi, it is in Italian cinemas from 31 March. The film, born from the book by David Miliozzi ‘And everything began to tremble’ and from an idea by Dr. Elisabetta Garbati, was scripted by Simone Riccioni, David Miliozzi and Jonathan Arpetti.

We met Giometti in Tolentino at the multiplex Simone Riccioniwho greeted and granted autographs to the many spectators who occupied four theaters, asking them to tell us about the genesis of the film: “The film was born from an encounter with director Federica Biondi, with whom we decided to write a screenplay to tell the story of our fellow villagers who experienced the 2016 earthquake. There are four stories that intertwine with the protagonist who unites them as a common thread through the rhymes of Dante Alighieri ”.

Why the choice of the Marche region as a location?

“Being from the Marche region, I am in love with my territory. The idea is to work in this area to tell the beauty of the region, which most of the time is seen only as a transit region. Instead, I am convinced that we have everything at our fingertips: sea, mountains, art… So I said: let’s shoot the film in the Marche ”.

Why did you define the film as a ‘ballad’?

“It’s a verse with verses. The ballad is a verse poem, which is then stitched up by the main character. The ‘broken shells’ represents the strength of a house (the shell) that can be broken by an earthquake. Or our freedom; or our serenity “.

What does the metaphor of broken shells refer to?

“The shell is intended as an identity concept of the refuge. The earthquake has broken the shell, the certainties, that sense of protection that the house gives, and we all come to identify with the place where we live. Life forces us to let go, whether it’s a place or an affection, it’s its law. In the face of shocking events, the great challenge is to manage not to lose yourself and then just look back. Each of us must give value to his own history ”.

The film cites Dante Alighieri’s Canticle from Paradise from the Divine Comedy: how to bring out beauty?

“Heaven is mentioned, because my idea is that the Supreme Poet is not so far from our ‘situation’ and therefore ‘we went out to see the stars again’. The idea is to show the good things that happen in life. This is the strong message of the film: a message of hope ”.

Speaking of the word hope: what grammar do we need to tell about life?

“Sincerity. I am convinced that the sincerity and freedom of the person can be the right grammar to tell about life. This film, in my opinion, very calmly (it is a film with a different speed from my other films), because it is a bit slower, just to give that opportunity not to be so hectic in life; but enjoy a ‘piece’ of life, which is told by these four stories, where with their simplicity the characters are able to make a message of hope flourish ”.

The film tells of a community, which is based on a memory: how can they be told through a film?

“The community is a place where you are inserted and memory is an experience that happened to a community. These two words are intrinsically linked together ”.

Director Federica Biondi recounted the stylistic solutions adopted to restore the essence of the Marche landscape to the audience: “We have chosen places that are not clearly Marche, because then the Marche is a lot of what is unknown. We tried to show it with new eyes, how one should look at everything around us a little, with those eyes there, without looking for what is already known. I am not from the province hit by the earthquake, I am from Jesi in the province of Ancona and I felt the earthquake marginally but it was more than enough to be afraid every time, even today, I feel something shaking. The people of the Marches are very welcoming, very pure “.

The Marches, the earthquake, the family and Dante all in a film full of spirituality