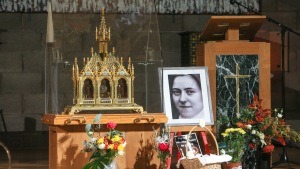 On January 2, 2023, the Church celebrates the 150th anniversary of the birth of Saint Thérèse of Lisieux, on January 2, 1873 in Alençon. An anniversary with which Unesco is associated for the 2022-2023 biennium. A strong sign, which shows that Thérèse’s influence extends far beyond the Church and believers: as a woman of peace, love and culture, she actually touches all of humanity.

Who would have thought that the one affectionately nicknamed “little Thérèse” would be honored by one of the greatest international bodies? Every two years, UNESCO honors the memory of people who have worked in the fields of peace, education and science. That Unesco inscribes Thérèse on the list of anniversaries 2022-2023 means that the whole world recognizes the heritage and influence of this young Norman Carmelite who became a doctor of the Church. “The 193 States of the world have unanimously considered that highlighting Thérèse of Lisieux’s birthday was good for humanity”, told last December Nicole Ameline, delegate of France to the UN to our colleagues from RCF.

The sanctuary of Lisieux had proposed the name of Saint Thérèse of Lisieux in November 2020, in view of the 150th anniversary of her birth. On November 11, 2021, the General Conference of UNESCO member countries validated Thérèse’s registration. “A young French woman known throughout the world, a woman of culture, education and science, Thérèse of Lisieux, through her personality and her work, scrutinizes the depths of the human heart and opens possible paths of response to men and women. of this world in search of meaning, in search of personal and universal peace”, explained Father Olivier Ruffray, rector of the sanctuary of Lisieux.

She who wanted to “travel the Earth” and “announce the Gospel in the five parts of the world and even in the most remote islands” can rejoice that her universal message of life, peace and love has radiated beyond the oceans and is recognized today as a good considered desirable by Unesco. Thérèse has always promoted peace. Peace of soul and peace between peoples. She worked in this direction during her lifetime, but also after her death. It seems hard to believe, but the wanderings of Thérèse’s relics have resulted in miracles of peace. “We have observed, in several places, that graces come to the very place where the relics of Saint Thérèse have passed”, confides to Aleteia Father Olivier Ruffray.

The great battle that Thérèse waged throughout her life, from her conversion on Christmas Eve 1886 until the end of her life, was the battle of love. A driving force from which flowed all his daily actions, and which affected the member countries of Unesco. “Without love, all works are nothing, even the most brilliant”, she wrote in her autobiographical manuscripts. A fight that made her a “warrior in armor”, as Jean de Saint-Cheron brilliantly points out in his essay Praise of a warrior (Grasset). A war waged in the name of love, in the very little things of life, but waged in a radical way. “The most impressive thing is that this fight borders on love in action for those she does not love, in the sentimental sense of the term” because “Thérèse understood that love was not just a story of feelings but above all a story of will and acts of will”, confides to Aleteia Jean de Saint-Cheron.

Another element that favored its inscription on the list of anniversaries of Unesco, its production of writings – letters, autobiographical manuscripts, poems, plays… Story of a soul, translated into more than 80 languages, is one of the best-selling literary works worldwide (500 million copies). “She writes, directs, and also likes to play herself, she is a real artist, explains Father Olivier Ruffray. All his works also serve the Francophonie, Unesco has been sensitive to this”.

Thérèse touches in a universal way because she is able to “join any man and any woman in what constitutes the great desires which animates all humanity: the desire for happiness, the desire for love”, emphasizes Jean de Saint Cheron. “Saint Thérèse is not only a figure for believers but for all humanity, without distinction of religious convictions”, abounds Father Laurent Berthout, in charge of media relations for the diocese of Bayeux and Lisieux. It therefore affects believers and non-believers, but also all the peoples of the earth. As proof, the countless sanctuaries dedicated to him around the world: Brazil, Kazakhstan, …

Nor did Unesco ignore the spiritual dimension of every human being by choosing to pay homage to Thérèse of Lisieux. Her absolute confidence in prayer, her love for Jesus, her intense interior life made her a woman of remarkable spirituality. Crucible in which emerged his immense spiritual intuition, which is called “the little way“, this “path of trust and total surrender of oneself to the grace of the Lord” as John Paul II would say. She then paves the way for millions of people around the world who take her “spiritual elevator” to get closer to God. How ? By making himself very small, like a child who abandons himself in his mother’s arms, humble and trusting, to go into the arms of Jesus.

A year full of events

This tribute paid by Unesco involves many events that will take place throughout France throughout 2023: conference at Unesco probably in April 2023, film about the life of Saint Thérèse produced by the sanctuary, 100th anniversary of her beatification… So many opportunities to get to know the immense “little Thérèse” better, to put ourselves in her school of love, and to turn to her to entrust to her the trials of our lives.

Discover the most beautiful quotes from Thérèse of Lisieux:

The “little Thérèse”, an immense treasure for our time