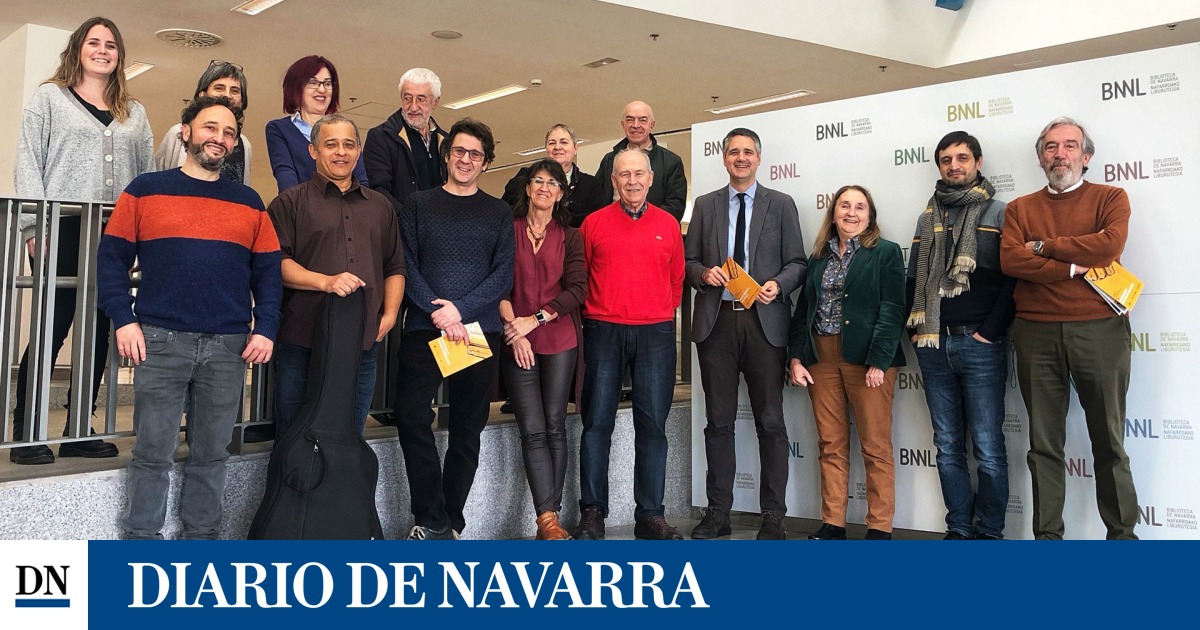 Service Libraries of the Government of Navarra is committed to a pSchedule of activities for the first quarter of 2023 in which he intersperses established cycles with novel proposals.

The Library of Navarre will resume consolidated cycles such as ‘Spirituality’ or ‘Literary Conversations’; will host the ‘Literarte’ festival for the first time Y will honor Pablo Milanés on the occasion of Poetry Day, by the hand of Cuban singer-songwriter Jorge Sánchez.

In addition, several of the projects included in the program are also carried out in other libraries in the network, including ‘Pamplona Negra’, ‘Literarte’, ‘Libraries and seeds’ or the emotional health programme.

The general director of Culture – Príncipe de Viana Institution, Ignacio Apezteguía and the management of the Library Service have held a meeting with personalities and representatives of the entities participating in the programming of the first quarter.

PROGRAMMING OF THE LIBRARY OF NAVARRE

In the context of the ‘Sit down and tell it’ campaign of the Institute of Public Health and Occupational Health of Navarra (ISPLN), thehe Library will offer a school-workshop for mothers and fathers on ‘Physical and emotional health in the first years of life’. It will be held in three sessions, on January 12, February 9 and March 9, lasting two hours each, by Ana Sala Juaniz (pediatric psychiatrist) and Javier Molina (pediatrician).

Among the novelties of the programming for this new year is the ‘Literarte’ festival, which emerged from the alliance between the reading clubs of the public libraries and the company ‘Producciones Maestras’. The festival will start on January 24 in the Projection Room of the Library of Navarra with the first performance, which will take place at 7:00 p.m.

The fourth edition of the cycle will begin on January 17 ‘Literary Conversations’ coordinated and presented by Roberto Valencia, in which six authors of different nationalities will chat, every fortnight, about topics as exciting as the recent history of Spain (Sergio del Molino‘Un tal González’), the conformation of reality through Buddhist and Hindu thought and Western thought (Juan Arnau‘In the mind of the world’), the femme fatale in cinema and literature (Elisenda Julibert,’ Fatal men’), fear (Bernat Castany‘Philosophy of fear’), evil (Ana Carrasco-Conde‘Say evil’) and blindness in literature (Lina Meruane‘The writings of the eye’).

Within the Saharako Kabiak – Nidos del Sahara project, a Saharawi film cycle will take place during the month of January and February by the ‘Fisahara’ festival, recently recognized with the 2022 González Sinde Award.

The cycle of talks will also continue, with the first being held on January 23, in which Maite Ramos and Ana Larragueta will present the ‘Kabiak’ project and the collaborative work carried out with the School of Art and with the Artistic Bachelor of the IES Iturrama in Pamplona. On February 27, Lahebib Breika Abderraman, Sarahawi delegate in Navarra, will speak on ‘Human rights in Western Sahara’.

On February 22 there will be an open reading club on ‘The Desert Nurse’, a novel by Jorge Miller Huguet, with the presence of the author himself and the protagonist of the book. The activity will be completed with a tasting of Arab tea and pastries.

Children will also be able to get to know and participate in this project with two activities, one on February 8, with the presentation in Basque of the story ‘Hiru Miru’ by its author Josu Jimenez, and the illustrator, Maite Ramos; and on February 22, a kamishibai session in Spanish, on the Saharawi oral tradition.

Continuing with the ‘Libraries and seeds’ project, on February 1 there will be a talk by the farmer from Mendívil, Ivan Flamarique, about ‘Permaculture, an opportunity in times of crisis’. A month later, on March 1, a sowing workshop is planned in the ‘Loraldea’ community garden, led by the Red de Semillas de Navarra.

In March the cycle organized by Espirituality Pamplona-Iruña will return, under the title ‘Liberation of suffering’. The cycle will begin on March 6 with Enrique Martínez Lozano who will speak about ‘Pain, suffering and spirituality’. March 13 will be Nati Labairu, by Goizargi who will be present with ‘We know we are mortal, but do we really feel mortal?’. On March 20 Teresa Gaztelu will talk about ‘The crisis as a path towards understanding’. On March 27, José Arregi will focus on ‘Loneliness that hurts, loneliness that heals’, and on April 3 it will be matilde de torresdoctor and teacher of Sophrology, relaxation and self-realization techniques who will talk about ‘In the depth of the transitory: liberation from the fear of death’.

The series of scientific gatherings ‘Núcleo de conversación’ will return on March 15 with new proposals on the Sciences and Humanities, led by Ignacio López Goñi, Javier Armentia and Joaquín Sevilla.

In addition, the Library of Navarra will celebrate two special days in this first quarter, March 8 and Poetry Day.

To celebrate Women’s Day, the children’s room will host the story session in Basque ‘Berdintasuna maite dugulako / For the love of equality’, by Ines Bengoa. On the other hand, you can see the exhibitions ‘Empoderadas. Women of fair trade’ (SETEM) and ‘Being a woman in Guatemala’, this is also accompanied by a sample of textile crafts. A dramatized reading and meeting with the author of the text read is also planned.

The March 21, Poetry Daythe Library of Navarra will have the presence of the Cuban troubadour Jorge Sánchez, who will offer a tour of the work of Pablo Milanés.

The programming for this first quarter is completed with a talk on March 7 with the Italian essayist Nuccio Ordine and the editor of Acantilado, Sandra Ollo.

ACTIVITIES THAT ARE EXTENDED THROUGHOUT THE LIBRARIES NETWORK

From January 23 to 27, twelve libraries of the network will host activities of the ‘Pamplona Negra’ festival, dedicated this year to the Nordic novel, coming for the first time to the libraries of Tudela, Tafalla and Alsasua. The libraries will host their own activities related to crime novels and the participation of authors from Navarre.

The first of the proposals is the dramatized reading ‘What happened in Undiano’, by the Navarrese author Yolanda Almeida Rodríguez (in San Pedro on the 23rd and in Zizur on the 25th of January) and the second ‘A very black trip’, in which the author or author chooses a thriller, to talk to the public about the place, time or culture in which it is set, or to relate it to his own work.

The ‘Literarte’ festival will reach the rest of the libraries in the network, with activities confirmed for the moment in Zizur on February 23), in Alsasua on April 19, in Tudela on April 21, and Noáin on May 18.

The libraries of the network collaborate with the Institute of Public Health and Occupational Health of Navarra (ISPLN) in its emotional well-being program ‘Sit down and tell it’. On the one hand, they are collaborating in the dissemination of the materials produced by this entity (bookmarks and roll-ups) and on the other hand, the website of this Institute includes the different resources offered by libraries related to the subject.

The Library Service has published a bookmark-calendar, with the motto ‘Reading, the healthiest emotion / Iracurri, emozio usasungarriena’, which will be sent to the 94 libraries of the Network as gifts among users and collaborators.

In the libraries of Mendigorria, Peralta, Aoiz, Tudela, Milagrosa (Pamplona), Leitza, Alsasua and Castejón, as part of the ‘Saharako Kabiak – Sahara Nests’ project, as well as the ‘Bubisher. Libraries of the refugee camps in Tindouf’, there will be talks about the work of Kabiak and a kamishibai session for children.

The “Libraries and seeds” project, which has been selected by the ‘Iberlibraries’ program as one of the 19 winners among 143 submitted to the tenth call for aid 2022, wants in this new year to gain new impetus in the 23 participating libraries.

The ‘Literarte’ festival and activities on emotional health, in the 2023 library program

Mario Tozzi, a geologist in defense of the environment
Meditate to breathe with Infinity
OUR LADY PILGRIM OF THE MIRACULOUS MEDAL FOR THREE DAYS IN CAMPAGNANO | Green Island TV
Tweet
Share
Share
Pin