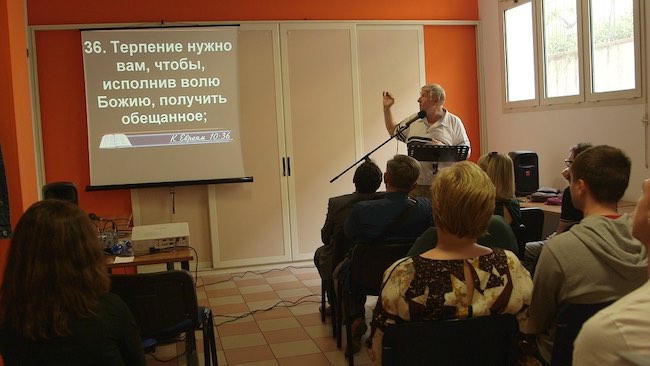 Art, history and social. These are the themes of the eleven documentaries broadcast on Tv2000, from June 16, every Thursday in the late evening, until the end of July. We start with ‘Our’ (June 16), a documentary with the narrative voices of Fabrizio Gifuni and Sonia Bergamasco on the experience of a group of eight young people involved in a research project on the world of religious communities that populate the city of Bologna. Then ‘The milky way’ (June 23); Voices from silence, on the extraordinary lives of hermits (June 30); Michelangelo in Florence (July 7) and Michelangelo in Rome (July 14) on the artist’s works in the two most important cities for Renaissance art; Pienza city in the light (21 July); Lorenzo Lotto, a journey through the crisis of the Renaissance (28 July); The most beautiful painting in the world (4 August), journey into the Resurrection painted by Piero della Francesca; The painter of the tent (11 August), on Emanuele Modica the Sicilian peasant who paints to shake consciences in the fight against the mafia; Sicily Grand Tour 2.0 (August 18); Antonio Santin Defensor Civitas (25 August).

Our by Marco Santarelli

The experience of a group of eight young people – four boys and four girls – almost all university students with a humanistic, social or educational focus (19-29 years old), involved in a research project on the world of the religious communities that populate the their city, Bologna. A reality often invisible and mainly composed of immigrants from all over the world, who represent a living cross-section of Italy today, much closer and more present than we imagine (the city of Bologna hosts more than 60,000 foreigners of 149 nationalities, among the highest percentages in Italy). The documentary follows the discussions of the group in the study room of the university church of San Sigismondo (in the heart of the university area of ​​Bologna), bringing out the cultural differences and beliefs of each of them (What does it mean today to believe and have a faith, for their personal and collective identity?). The moments of reflection and discussion within the group are marked by meetings with the communities and their spiritual guides, in the most ordinary places of worship and in the most hidden and unlikely ones (garages, industrial buildings, hotels).

The Milky way – Nobody saves himself alone by Luigi D’Alife

During the day, the mountains between Clavière and Montgenèvre are crossed by thousands of skiers on ski holidays in the “La Via Lattea” ski area; at night, they are smuggled through the woods by dozens of migrants who leave Italy to continue their journey across the border with France. “The Milky Way” is the story of solidarity of the inhabitants and the dangers faced by migrants, told through glimpses of life and animated graphic novels against the backdrop of the mountain world in the awareness that – here as at sea – no one leaves alone.

A journey along the Italian peninsula to tell the eremitical experience. Stories of men and women who try to recover the profound sense of themselves and of life through an intimate and solitary journey. The result of a long journey along the peninsula, the documentary collects the stories of the new Italian hermits. Their testimonies, built in silence and recollection, become an invitation to become aware of the responsibility we have towards others, ourselves and the surrounding nature, suggesting new paths and new ways of living in the world.

Michelangelo in Florence by Piero Badaloni and Nino Criscenti

The life and works of Michelangelo Buonarroti in Florence. The guide is Cristina Acidini, art historian and former Superintendent of Florence. A production in collaboration with Metamorfosi.

Michelangelo in Rome by Luca Criscenti with Antonio Paolucci

Michelangelo and Rome: a decisive relationship for the artist, who stayed there several times, from his first stay in 1496 to his death in the capital in 1564. In Rome, Michelangelo created some of his masterpieces, as an architect, as a sculptor and as a painter, from the Pietà to the Sistine frescoes to the Dome of San Pietro. The documentary, with the guidance of the Director of the Vatican Museums Antonio Paolucci, illustrates the Roman works of Michelangelo and tells the artist’s life in Rome and his relationship with the city of the popes.

Pienza city in the light by Luca Criscenti

Architecture of man and architecture of nature, linked by a very close relationship. The strength and magic of Pienza lie precisely in the fusion of nature and art. Palazzo Piccolomini, which overlooks the Val d’Orcia, with its garden, its loggias and Mount Amiata in the background, is an extraordinary example. And it is this bond that led Unesco, twenty years ago, to choose Pienza as a World Heritage Site. The man who wanted the city is Enea Silvio Piccolomini, humanist, pope with the name of Pius II from 1458 to 1464. With an extraordinary art historian, Tomaso Montanari, to discover the artistic and architectural beauties of Pienza and its territory .

Lorenzo Lotto, a journey through the crisis of the Renaissance by Luca Criscenti with Enrico Maria Dal Pozzolo

Lorenzo Lotto, the good face of the Italian sixteenth century. With a singular life and a singular art. This documentary narrates them in an intertwined way and does so starting from the conclusion of the artist’s life, from his refuge, in the Sanctuary of Loreto, where Lotto died silently, at the age of 76, in 1556. Venetian, but active in Rome, Bergamo and especially in the Marche, Lotto had a very intense production, always characterized by a surprising and witty creativity. The film presents many works by him, including canvases, portraits and altarpieces. And they show themselves in their context, in the places where they are kept and for which, very often, they were made. Works that document the pindaric flights of a man who tasted success and defeat, and who accompanied the crisis of the values ​​of Renaissance Italy.

The most beautiful painting in the world by Luca Criscenti

‘The Resurrection’ by Piero della Francesca as it has never been seen. After a careful restoration and a long research campaign, which has revealed new and unpublished aspects of one of the most famous works of the Sansepolcro master, the documentary proposes a journey into a work of art that has fascinated intellectuals and artists for centuries. with the guidance of the art historian Tomaso Montanari and the voices of scholars and restorers. In the setting of one of the most fascinating villages of the Valtiberina.

The painter of the tent by Renato Lisanti

After the murder of his father at the hands of the mafia, the Sicilian farmer Emanuele Modica takes up his brush as if it were a weapon and camps for decades with his paintings among the people, in the squares of cities and towns, convinced that no means is more effective than art to shake consciences. After having toured Italy for thirty years with his traveling exhibition set up inside a large tent, the elderly artist, now in his eighties, decides to return to Palermo for one last exhibition in the square.

Palermo, 1969. A strange green tent occupies piazza Politeama. Inside dozens of canvases express pain, denunciation, anger, oppression, desire for justice. These are the works of the young farmer Emanuele Modica and represent his cry against the mafia: his peaceful revenge against those who have extinguished the innocent life of his father, killed in the years of the “Sacco” for not having given his patch of land to the building speculations. From that mourning was born the artist, ‘the Painter of the Tent’ who never stopped exhibiting his paintings in the squares of Italian towns and cities, in the shadow of that tent which for 30 years was also the home of he. Over the years Modica has achieved considerable success, the appreciation of art critics, the support and friendship of great personalities from the world of culture and throughout the peninsula, even today, his provocative exhibitions are remembered. In spite of this, he continued to live on the margins, humbly, carrying out year after year an unusual artistic operation that he experienced on the skin as a real mission: to fight the mafia through art.

The Painter of the Tent today over eighty years old lives far from that Sicily that has not been able to enhance his art and his message in the 70s. His famous tent, latest version in April 2017, lies dusty and rusty in a corner of his house-museum, in the province of Parma, a thousand kilometers from his land. Until one day, despite his advanced age, he decides to return with a last exhibition to be made where it all began, in Palermo. His return to Sicily is a journey back in time during which the elderly artist tells his very special story.

The story is set in the present day. Giorgio is a young university student. In the library he retrieves a series of old volumes: they are full of papers, sketches and drawings. They are full of stories. The boy is so fascinated by the story that Jean Houel, a French painter “culturally omnivorous”, manages to weave some of Sicily, that he decides to explore this island, making the “Voiage pittoresque des isles de sicilie de Malte et de Lipari” his guide . He will thus discover that the words of Houel, who defined Sicily as “the most curious place in the universe”, are still true today. It took Houel four years to explore Sicily, but he returned a dense and colorful picture: the legends that are hidden in it, such as that of Polyphemus, Aci and Galatea, or Scilla and Cariddi, and still the abduction of Proserpina; Sicilian life, the real one, with its cults, habits, even gastronomy. A kaleidoscopic land, which has made its many dominations a strong point in the creation of a complex and unique identity.

The merciful figure of Monsignor Santin, bishop of Trieste and Koper from 1938 to 1975. In particular for the Istrians and the Giulians, Monsignor Santin – an exile among the exiles – was a fundamental point of reference, a guarantee of understanding their problems and their difficulties, a constant presence in support of the weakest. With the same passion he too placed himself in defense of the Jewish people after the promulgation of the fascist racial laws, openly siding against Mussolini himself.

The documentaries of summer 2022: the proposals on Tv2000

Coolio's eldest son opens up about his father's death and spirituality: 'He was a wonderful father'
Monsignor Hubert Coppenrath died
We tested… “Immortality”, an investigation at the heart of cinema
Tweet
Share
Share
Pin