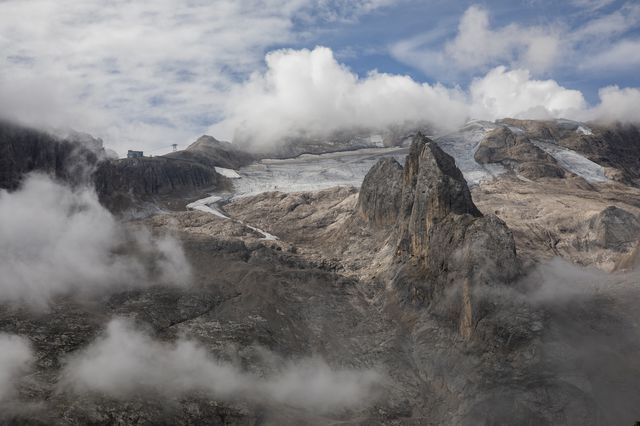 When the last chapter of our logbook will be published, “The Caravan of the Glaciers“- Legambiente’s traveling campaign it will be finished two days ago.

It has been a long journey, full of miles, minutes and minutes of filming, gigs and gigs committed by the photos taken, but what has filled the most this month were the reflections, the ideas, the reports.

Through the eyes of David (photographer of Ephotomedia partner of the Caravan) we experienced excursions, monitoring, moments of denunciation, sound narrations, meetings, but above all the pain of our landscapes.

There disappearance that is characterizing our peaks is in fact the most vivid memory we have of this trip.

5:00 am
The day started before dawn.
David drives towards Milan.
Today is the day of the press conference, and since it is the Lombard stage, Ephoto hosts the Legambiente team at its headquarters, Superstudio 13, to give rise to this final moment of the third stop.

8:00 am
We start with the latest productions, in the background our latest jazz playlist and a great desire to finally let me meet in an embrace and a chat about this important experience.

10:00 am
The last details, the flags that symbolize the caravan and Legambiente, the conference begins.
The data is very strong and the images produced by David even more.
The Forni Glacier, a former Himalayan glacierprotagonist of these last three days, is honored and greeted to leave for stage number four.
Direction: Canazei.
Departure around 3.30 pm.
In the camper, with David, there are Ilenia and Francesca.
The trip in their company, between chatting, music and laughter passes very quickly, despite the length of the trip.

Say goodbye to Ilenia and Francesca, David sets off for the Fedaia refuge, the starting point for the next day’s excursion.
FUN FACT not too FUN: on the way he meets three intrepid deer crossing the road regardless of danger.

Marmolada: let’s take a step back

The alarm goes off at 7:30.
“I get up and finally my gaze rests on the Marmolada “tells us David” a very fascinating and aesthetically powerful mountain“.

Approximately 8:00 am
The first people who will leave for the excursion of this stage arrive.
Coffee and croissants, as usual, and go up to the first refuge.

The day is structured in several “stations” where various glaciology experts and professors from the University of Padua explain the glacier and make speeches on the exploitation and speculation we are making of our mountains.

“The Marmolada was definitely the hike I enjoyed the most“David confesses”the pace of the caravan is slower and gave me the opportunity to enjoy the view and study the footage with the necessary calm“.

2.00 pm
Arrival at the fifth and last station of the excursion.
Shortly thereafter, the weather changes totally, so much so that the whole view is covered with fog in less than 5 minutes.
The caravan prepares the backpacks and hurriedly begins to descend towards the valley. Unfortunately, however, the rain beats their pace.

“This stage on a communicative level was very special.
We were unable to climb the Marmolada. The mountain is off-limits for rescue and search operations since this year’s accident.
The words of the interviews have been thought and considered to convey a clear and precise message without neglecting the tragedy but without dwelling more than necessary.
It was a different and interesting job, trying to tell the Marmolada from afar by taking a step back”David tells us.

On the second day of the excursion the route is more or less the same, only the people and the activities change.
While on the first day David focused on the landscapes and filming of the glacier, on the second day he preferred to focus on the caravan and on the interventions / flash mobs.

The fourth stage is almost over, the next day the traditional closing stage press conference.
David devotes himself to editing the video, in which among the fundamental themes, beyond the excursion and the history of this glacier, emerges the use of the mountain and the need to rethink the mountain as an educational tool.

“Personally, I had never really stopped to think about how we are destroying the mountain through systems and exploitation. Only these days am I truly understanding the urgency of drastically changing habits and the need to reduce the speculation we are doing about it.”Says David.

AUGUST 30th
Wake up at about 8:00.
We leave in the direction of Padua. With David, in the camper, there are Ilenia and Francesca.
Leaving the valley, the route takes them to the Fedaia pass, one of the worst in the Dolomites for brakes.
Downhill camper starts to lose control – brakes have overheated and stopped working. After a stop and a long wait with the temperature change, the brakes recover and we start again.
Arrival in Padua around 3:00 pm.
As scheduled, the visit to the geography museum begins at 16:00 and then the scientific aperitif.
The following day the final press conference will also take place at the geography museum, a very important date for the press given the situation of the Marmolada.

The glacier that resists

About 3.30 pm departure from Padua towards Malborghetto.

“During the trip by car I got excited looking at the Friulian mountains.
This was perhaps the stage I most expected“.
Arrival in Malborghetto for dinner time, where they meet Valter, president of the glaciological committee and lecturer at the Milano-Bicocca University.
Since the next day we expect about 1000 meters in altitude, we go to sleep early.

Wake up at 6.30, departure from Malborghetto 7:15.
50 minutes journey to get to the departure refuge: the landscapes along the way take our breath away.

8:30 am
We expected many people but we find much more.
We are a group of about 50 people.
A first introduction chat and off to go to the glacier.
The path in the woods is narrow and slippery and snaking back and forth to shoot is quite tricky.
After about 3 hours of walking we arrive under the glacier. This is theoretically one of the few glaciers that has not lost glacial mass. The sheltered position, the northern exposure and the snow avalanches have protected it over the years.

The deficit of Montasio is that, almost all of the glacier is covered with debris, the portion of visible ice is, in fact, relatively small.
To render with images what Vanda and the committee explained was not easy.

David interviews Vanda and at the same time the musician begins the salute to the glacier, starting to play the accordion so as to excite everyone.

After the greeting to the glacier, I continue the interviews with Nives Meroi and her husband Romano Benet, Legambiente testimonial and mountaineers who have climbed the 8000m peaks.
Finally we remain in a few on the glacier and he manages to enjoy the silence of this mountain for a few moments.
It starts to get cold, we go down towards the valley.
Nice interesting day, but also very tiring.

Last day of the Caravan and nostalgia begins to take over.
We have now started this adventure for 20 days. The sight of these slopes immediately alienated David from the world.

“I have met people who respect the power of these creatures, studying them and getting to know them. Without having the presumption of being able to fully understand.
Feeling at home already in distant lands.
Listen to their breath, their cry. That noise of collapses and din on their slopes as if they were crying real tears.
Walking on the moraines of the ice age. Feel the weight of time.
Feeling the responsibility to give them credit, to tell them and pay homage to them as they did for us and as they still continue to do, fighting with all their strength against an enemy greater than them.
The glaciers are shouting for help, each in their own way, and the possibility of being able to be a witness and spokesperson for this cry is a pride that I will carry within.
Getting to the forehead of these ice giants out of breath and tired legs. Take a breath, look up and feel as alive as they are“.

David, one of the strongest moments?

“There have been many encounters that have given me stimuli and enriched me.
The musical performances in the mountains were very touching.
Intimate non-verbal stories that made the souls of those present vibrate. Founding activities de
“The Caravan of the Glaciers”, where the mountain is told by experts for the scientific side and artistically interpreted by the invited musicians.
The first musician I met in the caravan, Martin Mayes, an exceptional artist and a person of extraordinary sensitivity.
The music of the saxophonist who greeted and paid homage to the Marmolada was no exception: improvising and experimenting with the mere sight of the queen of the glaciers.
Last artist, Paolo Forte, who in front of Montasio gave us his interpretation of the shy glacier that hides in the mountains to protect himself“.

“I’ll tell you a couple that maybe interest you.
On the Marmolada I stopped to sleep at the Fedaia pass. Arriving late at night I park next to a 1960s-style camper. One of those vehicles that when you see it on the road you think you have come out of a film of the past.
As soon as I woke up in the morning, I met the owners. Two elderly gentlemen of about 80 years, mountain lovers. They had met years and years earlier right on the slopes of the Marmolada that consolidated their relationship every year by returning to enjoy that view together.
Another particular encounter, the first hotel in Val Veny, like a film by Wim Wenders. The hotel staff seemed to come out of “Gran Budapest Hotel”.
Right from the start you realize that this place has a particular soul and spirituality.
It is not the hotel itself that emanates these sensations, but the people with their experiences and stories.
The owner, a nostalgic mountaineer, who on his return from excursions wanted to see all the photos and videos of that glacier he had known for 40 years and on which he had not returned for years.
During the last dinner of that stage we start chatting with the cook. Always up to date on our movements and our initiatives. The discussion turns to his life and tells us that this is the parents’ hotel.
Open only for two months a year and he is not a cook by profession but works in Rome at the Sacra Rota court.
Not least were the other employees: two foreign girls who had arrived at the hotel for the summer season. They didn’t speak Italian but every time their eyes met they smiled. They were able to move in space in a totally silent way.
Last but not least the guests of the hotel. Elderly gentlemen on vacation who moved with great difficulty from the TV room to the table under the arcades. They played cards or sang folk songs accompanied by a diamonic“.

The souvenir you will take home with you?

“I will take with me a training and personal growth experience on several fronts. From a working point of view it was very interesting. Being able to tell a glacier in a dynamic way without falling into banality, being able to show the critical issues but without taking up or telling only the problems. Finding a meeting point in storytelling between journalism and the aesthetics of these places was the personal challenge of this traveling campaign.“.

“The Caravan of the Glaciers”: discovering the Marmolada and the Montasio glacier – GreenStyle