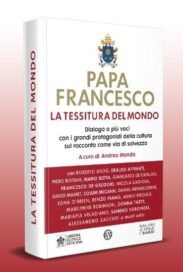 As ripe fruits, the contributions collected in the book “The weaving of the world” (Libreria Editrice Vaticana – Salani) have grown on the robust and luxuriant branches of Pope Francis’ message for the 54th World Communications Day (2020). The director ofRoman Observer, Andrea Monda, has put together – on the pages of his newspaper first and then in volume – over 40 characters from the most diverse backgrounds who, starting from their specific field of study, research or work, have reacted to the text of the pontiff “Why you can tell and fix in memory. Life becomes history ”. In fact, the message in question was dedicated to the theme of the story, which begins: «Man is a narrator. From an early age we are hungry for stories as we are hungry for food. Whether in the form of fairy tales, novels, films, songs, news… stories influence our life, even if we are not aware of it. We often decide what is right or wrong based on the characters and stories we have assimilated. Stories mark us, shape our beliefs and behaviors, they can help us understand and say who we are ». The biblical root of reflection, to remain in the botanical metaphor, we find it in the Gospel of John: “the Narrator par excellence – the Word, the Word – became a narrative:” The only begotten Son, who is God and is in the bosom of the Father , it is he who recounted it “(Jn 1:18). I used the term “told” – writes Francis – because the original exeghésato can be translated both “revealed” and “told”. God has personally woven himself into our humanity, thus giving us a new way of weaving our stories ». The writer focuses on this passage Eraldo Affinati: «I am struck by the Johannine call to the Word as life and flesh. Especially today we need to link the language to experience […]. When telling a story seems to cost nothing to the person who wrote it, there is something wrong ”. But we are not just talking about written stories, as the singer-songwriter points out Francesco De Gregori which captures a detail: the fact that Pope Francis “has no problem with putting songs alongside literature and cinema. This is by no means to be taken for granted. It is difficult for songs to be considered culture, rarely what the songs tell is invited to the same table as the so-called “major” arts ».

The narrative, according to the Irish writer Colum McCann, is «our great democracy. It’s that thing we all have access to. We tell our stories because we need to be heard. And we listen to stories because we need to belong ». It is an anthropological necessity because, as the American observes Daniel Mendelsohn, “We are creatures of fiction.” But not only. Narrating “there is a point where the transcendent takes over, where you need a kind of superhuman talent to make great art.” That is, one enters the terrain of spirituality and theology. «The knowledge of God – Francis teaches – is transmitted above all by telling, from generation to generation, how He continues to make himself present. The God of life communicates himself by recounting Life ». Comment the biblical scholar Jean-Pierre Sonnet: “The relationship between life and story occurs in the New Testament, both in the macro narrative of the Gospels, and in each of their micro narratives”. The writer is also convinced of this Mariapia Veladiano: “There is more theology, understood as a reflection on the religious experience of men and women, in the books of literature than in the treatises, because the theology of literature fully assumes the questioning of life on the themes of good, evil, of meaning and promise, but at the same time it does not claim to ask for the circle with the answer ». For the writer Sandro Veronesi the Gospel is a «sophisticated, beautiful narrative machine».

A concrete example of a narrative that springs from a lived faith, and that inclines towards faith, is offered by the British Dominican Timothy Radcliffe and the Argentine Franciscan William Spirito identifying it in John Ronald Reuel Tolkien’s masterpiece “The Lord of the Rings”. Quoting the author himself, Radcliffe recalls how this popular trilogy is an “exploration of his faith in the Eucharist”. Spirito, for his part, notes that “the stories we love to hear or read as children shape us, mark us and help us understand and say who we are (hobbits who, like Frodo, Sam, Pippin and Merry, become capable of doing well in addition to the obvious and trite things, accentuating adventures and challenges, and finding oneself changed) ». Pope Francis also cites Tolkien’s work in the post-faction that he agreed to do “as long as it is not considered final” because “as Frodo, the protagonist of Tolkien’s” The Lord of the Rings “says,” the stories never end “”.

The urban hermit Antonella Lumini reads the opening words of the Message as a stimulus “to look from that point of view in which the visible intersects with the invisible, opens up, expands with meanings that amplify the understanding of what we observe, like the gaze of God who sees the obverse and the reverse ». He then resumes a key passage, the same that gives the book its title: “Man is not only the only being who needs clothes to cover his vulnerability, but he is also the only one who needs to tell about himself, “Dress” with stories to guard your life. We do not only weave clothes, but also stories: in fact, the human ability to “weave” leads both to fabrics and to texts. The stories of all times have a common “frame”: the structure includes “heroes”, even daily ones, who, in order to pursue a dream, face difficult situations, fight evil driven by a force that makes them courageous, that of love. By immersing ourselves in the stories, we can rediscover heroic motivations to face the challenges of life ». «History – reflects Antonella Lumini – is a magma that however has its own estate, it exists. At the same time it always pushes further into a becoming in which the past forges the plots of the future […]. In the magma of such concatenations that weave the stories, a light breath passes that is not subjected to any yoke: the breath of grace where everything is light ».

The last contribution is an unpublished text by the writer Tartt woman (Pulitzer Prize in 2014) taken up in the concluding post-faction of Pope Francis who quotes a passage: “stories are canvas for sails that we hoist to capture a breath of the divine. The thoughts of other people take on a strange life in us, and that is why literature is the most spiritual art of all and certainly the most transformative. Like no other way of communicating, a story can change our way of thinking, for better or for worse (…) ancient and modern cultures have always considered stories to be magical – and dangerous – for one reason: because you can hear a story and, at its end, being a totally different person ».

The art of weaving stories In the book by Andrea Monda, director of the Osservatore Romano, a multi-voiced reflection on storytelling as a way of salvation | Diocesan Life of Pinerolo