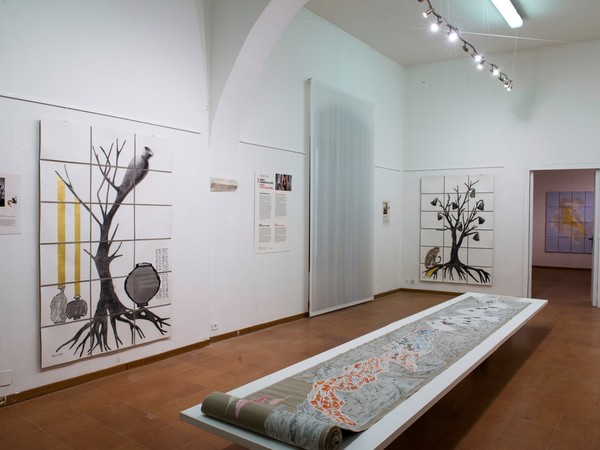 Tarshito. The Path of the Enamored Wanderer


After the stops in Trani and Taranto, the great exhibition of the Apulian artist arrives in Brindisi.
The exhibition will be open from 14 June to 4 August 2022, Monday from 17 to 20 and from Tuesday to Sunday from 9 to 19.15.

Inauguration: 13 June, 7.30 pm
In the presence of the artist and
Emilia Mannozzi, director of the Biblio-Museum Pole of Brindisi
Enrica Simonetti, curator of the exhibition
During the evening the film Angel wings by Noemi Zablocka-Trisolini and Tarshito will be screened, music by Enclose by Mattia Morleo, footage by Luca Desiderato

“The Path of the Enamored Wandererit is a pilgrimage that I have lived with devotion to places and humanity of the world to meet native and tribal guardians of artistic traditions and ancestral values. Simple life towards lofty thoughts », says the master Tarshito – an artist from Bari with an international activity, nomadic by vocation also in the paths of oriental artisan techniques and skills. This is the title of the new exhibition project promoted by Poly biblio-museums of Puglia and by the Department of Tourism, Economics of culture and enhancement of the territory of the Puglia Regionwhich with this traveling exhibition puts on the net for the first time some of the most beautiful exhibition places in Puglia, essential stages of this long journey of art, beauty and spirituality, with a single project capable of soliciting loose-knit reflections.

«Tarshito represents the essence of the research artist: of new worlds, of new forms of spirituality, of new techniques and ancestral knowledge. For the Puglia Region, the exhibition Il Sentiero del Viandante Innamorato is therefore above all a journey, capable of connecting cultural places and projects, in the name of that museum network on which we have been working with commitment for years “in fact, he says Aldo Patruno, director of the Department.

Trani, Brindisi, Lecce, Foggia and Taranto are the first stops on this journey:

– from February 26 to April 24, Palazzo Beltrani, Trani
– from 6 May to 30 June, Pietro Acclavio Civic Library, Taranto
– from 12 August to 2 October, Convitto Palmieri, Lecce
– from 7 October to 27 November, Museum of the territory of Foggia, Foggia

“When is a traveler tired?” When he has nothing left to look at, when he has no voices to listen to and colors to imagine. The traveler, on the other hand, never gets tired, if he is guided by falling in love with the world, if he always has curious eyes and open arms towards the other. This indefatigable traveler is Tarshito, an artist who from Puglia met the world, tracing a life path that has to be told, because it is a long journey through a geography of the soul in which borders do not exist, but there is a wonderful universal sky. which reflects the beauty of the Earth, its complexity, its identity, ”says the journalist Enrica Simonetti, curator of the exhibition.
From India to Bangladesh, from Nepal to South Korea, from Peru to Mexico to Morocco, geographies dear to the artist’s imagination and real travels: these are the places where Tarshito meets artisans, artists, creating a perennial dialogue with them. «A total gesture of art, which is also a way of representing the world, the human, and nature. Or a way of seeking harmony“.

“You will see geographical maps that intersect the streets of Bari with those of Mexico City, as if nothing can interrupt the flow of inner emotion, because where there are houses, men, cities, there are also the thrills of life, the senses of each, almost in a mighty shock capable of making the concept of “homeland” a whole, a unison voice for the future of the Earth », explains the curator.

Born in Corato (Bari) on 13 August 1952, Tarshito (Nicola Strippoli) graduated in 1979 from the Faculty of Architecture in Florence with a thesis on street theater (supervisor Gianni Pettena, exponent of radical architecture). He leaves immediately afterwards for a trip to India, which represents a rebirth for him. In India he meets his teacher, Osho Rajneesh who entrusts him with the name “Tarshito”, or thirst for inner knowledge. In the early 1980s he founded the Special Gallery in Bari, together with Shama, his then partner, also a designer and artist. The experience lasted until 1987 involving renowned designers and artists (Alessandro Mendini, Mario Merz, Nanda Vigo) or even unknown ones, as long as they were interested in the experience / design of moments and objects of ‘new ritual’. He exemplifies in this area the beautiful series of carpets and tapestries of meditation.
In 1990 Speciale’s experience was documented with a major exhibition at the Groninger Museum in the city of Groningen, in the Netherlands, at the end of a trilogy that its director Frans Hacks wanted to dedicate to the Italian design of the eighties (the only experiences documented in the same trilogy: that of Ettore Sottsass or Memphis and Alessandro Mendini or Alchimia).
The 90s saw Tarshito the protagonist of collective and personal exhibitions and increasingly creatively committed to the archetype of the warrior of love.
He teaches at Futurarium, an experimental school founded by Alessandro Guerriero and at the Academy of Fine Arts in Bari, introducing meditation as a method of investigation and design. Special Earth, a place of shared life and work, opened in 1998 in Milan. The collaboration with Geologika (Andrea Facchi and Barbara Narici) for the creations in raw earth and with Clara Mantica for the capillary and in-depth work of reading and systematizing her spiritual and creative path from which the volume “Tarshito meditation and design” was born, published by Electa in 2001, created with the collaboration of Alessandro Mendini’s team. The book and the “Indian Ocean” exhibition held at Speciale Terra on the theme of the excellence of craftsmanship and its value as a heritage for humanity (curated by C. Mantica and Daniela Bezzi), create space and opportunities to open in Tarshito the Indian universe. Daniela Bezzi, resident in India and profound connoisseur of her culture, accompanies Tarshito on this journey starting with the exhibition “The Gold and the Clay” (2001) of which she is curator together with Jyotindra Jain All Crafts Museum in New Delhi. Her artistic path expands and at the same time focuses on the exciting practice of collaboration with Indian artisans.
From terracotta to metal, from the tribal paintings of the Warli or Sohrai tradition to the embroidery of Gujarat or Rajasthan, from the delicate miniatures of Bikaner to the gaudy devotional paintings of Orissa: the thirst for experimentation of new relationships, for ‘creative sharing’ knows no end , while the desire to paint on one’s own makes its way, to try with the mark of the brush on the canvas with one’s own gesture. The result is the infinite series of vases, large, enormous or small, on paper, fabric or in large sculptures, which are the most eloquent manifesto of his poetics: Tarshito’s work is expressed in the act of welcoming and fill up, and then overflow.
A conceptual and emotional transfer that occurs in the relationship with the form / material of the craftsman, or by guiding very particular meditation sessions, or by designing works that can be considered monuments to a completely new and at the same time ancient and very pure type of sacred art: that in to which the artist proposes himself as a humble channel of transmission, of a creativity which, being already a ‘gift’ in itself, can only joyfully share itself, even authorially, with others. However, remaining always and unmistakably by Tarshito, for the lightness with which all this is accomplished and celebrated, every time.