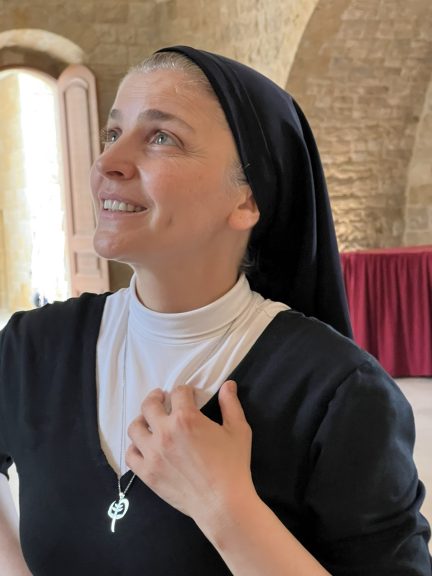 In a return to the sources, to save the human being in us, our thousand-year-old heritage, and a dying Lebanon, a young nun devoted herself to Syriac singing, Maronite spirituality, music in general and beauty. as an absolute value. For this, Sister Marana Saad more recently founded Philokalia, a term that Syriac borrows from Greek, and which means “love of beauty”.

At the end of a Maronite recital in the Syriac language, the spectators are surprised to have felt the words and the spirituality in the depths of their being, and to have experienced feelings with more force than if they were from another language. They then wonder how a word they don’t understand is able to invade them with more intensity than a language taught in their schools. Syriac is at the source of Maronite spirituality and it was also for the other Antiochian Churches. This language, even denigrated, has remained in our quintessence. It speaks to our spirit and quenches our thirst for the spiritual.

The sung hymns date back to the 4th-5th centuries with Saint Ephrem and Saint Jacques de Saroug. They accompanied the birth of Eastern Christianity, its development and its rooting in this land. They bear the highest Canaanite, Aramaic and Mesopotamian antiquity. They are the guarantors of the survival of this invaluable heritage which continues to resonate under the vaults of our churches and in parish processions. Eugène Roger, Jean de la Roque, Laurent d’Arvieux, Volney, Gerard de Nerval, Alphonse de Lamartine, Henri Lammens, Ernest Renan, and so many orientalists and missionaries spoke of these Syriac hymns sung in churches and chapels and which keep alive this language, bearer of a specific culture and spirituality.

If the school has withdrawn from its national duty which consists in transmitting the culture and the heritage, if the Church has failed in its mission in the transmission of this value, it is the Syriac song which embodies the continuity with a founding past of specificity, of personality and therefore of the meaning of existence. These Syriac hymns form a vibrant and living heritage.

The forest of Syriac song is a universe, a vast treasure. This is also how his repertoire, known as Beit Gazo: the treasure. “The High Middle Ages is hardly the West, it is the forest of an East which knows Syriac songs before receiving Byzantine copes”, would say André Malraux again. From Souguito (octosyllabic) au Yaacouboyo (dodecasyllabic) through the Ephremoyo (put from Saint Ephrem); and Qolo pshito (simple tone) at Qolo nguido (long tone) through the Qolo yawnoyo (Greek), usroto (melodic), Afifo (two hallelujahs), piosto (inviting), etc., it is a profusion of musical creativity coming from the depths of time, which still animates all the parishes of Lebanon and which keeps this mountain alive beyond all its ordeals.

In a return to the sources, to save the human being in us, our thousand-year-old heritage, and a dying Lebanon, a young nun devoted herself to Syriac singing, Maronite spirituality, music in general and beauty. as an absolute value. For this, Sister Marana Saad more recently founded Philokalia, a term that Syriac borrows from Greek, and which means “love of beauty”. It is an art school and a music institute, but also a culinary school and a monastery open to society. It teaches as much painting as theology, as well as the oud or the violin as well as the drums or the electric guitar. Icons are painted there as well as modern, cubist or abstract art. His monastery-school is a beehive of life where, between philanthropy and philocaly, the heart of Lebanon continues to beat, to move us and to amaze us.

Sister Marana rediscovered at the source of Maronitism, an infallible triad which had erected the communities of Beit-Moroun into a people constantly turned towards progress. It’s a magic recipe that has enabled it to survive centuries and genocides, and to survive the empires that have tried to suppress it. This triad is formed by the complementarity between the Church, the monastery and society, which among the Maronites constitute three inseparable realities, Sister Marana tells us.

The Maronite Church was built on a group of monasteries each managing a community or a group of villages. The convent, always open to the faithful, forms the school, the hospital, the farm, the field and the refuge. Monks complete their monastic life by serving the people. Unlike other monastic traditions which seek to isolate themselves from the world, the Maronite tradition “unites together eremitical life, monastic life and apostolic life, in the person of the monk who himself unites in his heart the ‘Church, monastery and society, aiming to live by seeking its own salvation and the salvation of the world for the glory of God’, writes Sister Marana in her doctoral thesis.

The sons of the pact

The one whose first name (Marana) means in Syriac “Our Lord”, recognizes herself as beat qyomo (daughter of the pact), in reference to the first Maronite monks known as bnay qyomo (son of the pact). This term also strangely recalls the form bnay qyomto (son of the Resurrection) by which all Christians, clerics or laity, designated themselves. The Maronites were more particularly inclined to this denomination relating to their ability to recover after each cataclysm such as the two genocides perpetrated by the Mamluks and then by the Ottomans.

Batqyomo today revives its Syriac language and heritage. She refuses to see them restricted to museums. From her choir of Saint Rafqa, she set up Philokalia, the monastery-school, the house open to everyone. She is aware of the importance of the mission of the Church to which she belongs. Apostolic activity is, in fact, an essential characteristic of Maronite monasticism. When for technical reasons the monastery could no longer contain the university or the hospital, it built, developed and managed them. Monks and nuns must reach out to the society from which they come, and their convents are called to welcome the people who give them their raison d’être. Philokalia, founded in 2019 with the collapse of Lebanon, is yet another challenge launched by Maronite monasticism which has chosen life and excellence beyond all obstacles.