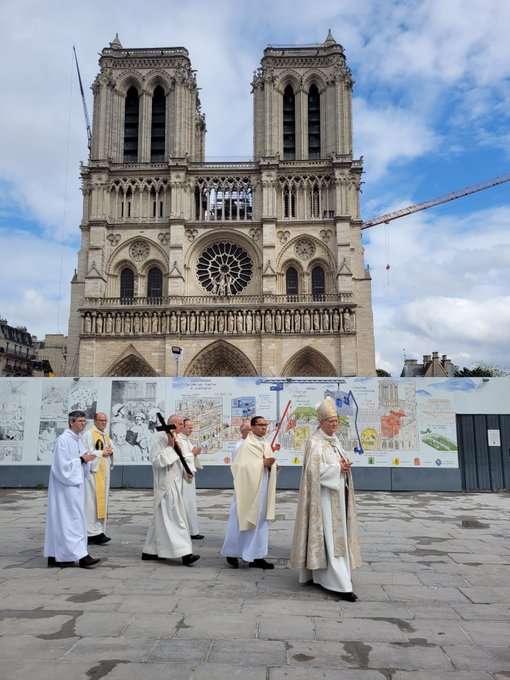 Archbishop Ulrich in the parvis of Notre Dame for his official installation at the helm of the archdiocese of Paris
Photo: Twitter @dioceseparis

To develop a missionary spirit and a collaborative spirit, which is precisely the synodal spirit; pursue a spiritual journey; engage in vocations. In the first homily as archbishop of Paris, Laurent Ulrich outlines his “government program” and puts it in continuity with that of his immediate predecessors, starting with the most immediate, that Michel Aupetit whose resignations were accepted “on the altar of hypocrisy”, as Pope Francis had said.

On May 23, Archbishop Ulrich he took office in a diocese of Paris still shaken by the resignation of his archbishop, wounded by the presence of a cathedral, Notre Dame, still closed and under restoration after the fire of April 15, 2019: A diocese, after all, in shock. He presented himself with a lot of speech politically correctwhere the quotations are all those that are thought right in this pontificate, in fact departing from the most combative line of Archbishop Aupetit.

Everyone was looking, therefore, at the first words of the new archbishop, which he immediately recalled both Aupetit and Notre Dame. And he then remarked that the Defender, or “the Spirit of truth” who defends “not the scientifically proven truth”, but rather “the truth concerning the mystery of the relationship between man and God in the person of Christ”, a Defender who “constantly does a job in us, even if we don’t always see it”as evidenced by the 400 adults of the diocese of Paris who will soon be confirmed.

Seeming from the readings, Archbishop Aupetit he laments that, with the arrival of Paul in Macedonia, the story that binds Christianity to Europe “perhaps too much” begins, to the point of becoming a dominion that generates today’s rejection. And he notes that the Holy Spirit “inspires in the Church the desire for Christian unity which history has divided; we understand that it is He who blows on these Churches when they seek ways of peace between peoples; when they support the efforts of a Union among our peoples that respects their differences and their cultures; when they argue with the latest popes, and in particular with Francis, that unity prevails over conflict; and especially when they know that it is better to build than to encourage distrust and that time is greater than space: to create and allow to develop virtuous processes in terms of peaceful behavior and integral ecology, the one that respects the most fragile as much as nature “.

According to Archbishop Ulrich, “Here lies the root of right projects for our continent”. And then we must “pay attention to the sufferings of an era”, and “develop a missionary spirit and a collaborative spirit, which is precisely the synodal spirit, in the Church today, in our diocese of Paris, following the great insights of the Cardinal Lustiger, maintained and developed by Cardinal Vingt-Trois and Monsignor Aupetit“.

It is this – according to the archbishop of Paris – that will continue to “arouse vocations at the service of the Gospel”, to “to pursue the charitable and solidarity work with the most precarious, which so distinguishes the parishes“, And” mingling with conversations and debates means continuing to listen to the cry of the victims of abuse and remedy as we have already committed to do to restore a trust that will do everyone good “.

For the archbishop one must “participate in forums and invite artists” and also “listen to the aspirations of our society even when they surprise and worry us, is listening to the youngest who already tell us what it will be …“

There Mass was held in St. Sulpice, the largest church in Paris, which is serving as a “cathedral”. But the beginning of the celebration began with vespers in the square in front of Notre Dame, in front of the Madonna del Pilastro, from which the archbishop entered the convalescent cathedral almost alone, taking possession of it.

There diocese of Paris is the largest in the France with more than 500 active priests, a hundred parishes, paid lay people or volunteers engaged in various movements and missions (homeless, migrants, etc.). As the president of the Bishops’ Conference of France (CEF) – currently Éric de Moulins-Beaufort – the new archbishop is the one who embodies the first French cult with political authorities, civil society and the media.

Synodality, spirituality, vocations: the program of the new archbishop of Paris