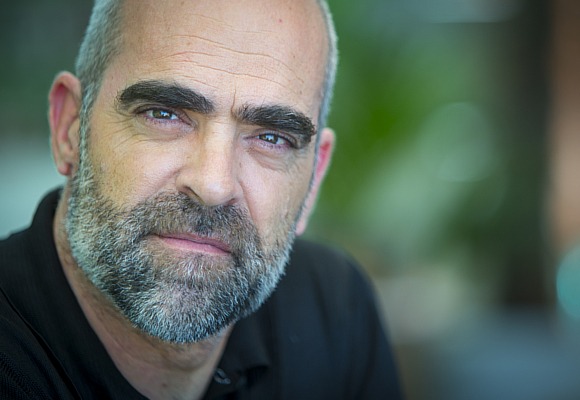 I saw Luis Tosar (Galicia) for the first time in flowers from another world (Icíar Bollaín, 1999), playing the role of Damián, a resident of the remote town of Santa Eulalia, where there is a shortage of women so that men farmers can start families and keep their land. A man with piercing eyes and bushy eyebrows with receding hair. With a strong and rough voice, but somehow also demonstrating a sweetness and fragility that makes him so human. No matter what role he plays, those characteristics are never absent. My next meeting with Tosar is in Mondays in the sun (Fernando de León de Aranoa, 2002), accompanied by Javier Bardem, Joaquín Climent, Enrique Villén, José Angel Egido and Celso Bugallo, in a story of workers from the port city of Vigo who have lost their source of work as shipyards. And then we shudder in I give you my eyes (Icíar Bollaín, 2003), one of the best films on gender violence ever made. In 2010, again under the direction of Icíar Bollaín, in Also the rain, Tosar shares the stage with Gael García Bernal, a director who intends to film a historical film in the middle of a real battle for the appropriation of water by corrupt governments and companies always willing to increase their wealth. And although there are dozens of films in the decade that follows Also the rainwhere Tosar makes comedies (none stand out) or is the bad guy who has to be defeated, his best roles are “en conjunto” or ensemble, where his presence is central, but around his character others flourish. I choose four of his most recent films that you can see on Netflix.

Classified as a thriller, the film remains in the shadow of doubt for a long time about its plot. Who is the good but mysterious Mario? How has he managed to be the favorite nurse of the residents of this aegis? Although his life seems very normal—married with a child to come, stable job with no financial pressures—Mario’s intensity in everything he does is worrisome. He seems to want to correct past mistakes that not even his partner, Julia (María Vázquez) knows about. This internal tension for Mario intensifies when Antonio Padín (Xan Cejudo), a well-known and feared boss of drug trafficking in Galicia, arrives. He chooses this place precisely because of his anonymity and the first ones he despises are his children, Toño (Ismael Martínez) and Kiko (Enric Auquer) for considering them inept, not worthy of the ascendant career of the creator of the empire. of the. Little by little, we learn about Mario’s connection with Padín, which takes us back to a past full of grudges and unsettled scores. The film received multiple nominations within Spain (Tosar received Best Actor nominations for the Feroz, Goya, and Mestre Mateo Awards), and was the winner of a Goya (Best Newcomer for Auquer) and the Gaudi for Best Supporting Actor (Auquer) and Best production direction.

This film contains so many human and environmental situations where there are no solutions, but the hope of change is always present. They are three apparently very distant and different stories, but both seem to have no solution and are doomed to foolishness, oblivion and death. Gonzalo (Tosar), as part of an international preservation team, is charged with preventing the killing of elephants by poachers in Mbouma, Cameroon, but his confrontational style only breeds resentment and more aggressiveness from the villagers. Mateo (Alvaro Cervantes) is a civil guard assigned to Melilla in North Africa, to restrict the entry of migrants into Spanish territory. Although he does not agree with the violent treatment of his partner Javi (Jesús Carroza) towards those who push to the limit what they consider their only chance of salvation for themselves and their families, he has to present fabricated versions of an incident fatal. But the heart of the film—as the title indicates—is the story of Adu (Moustapha Oumarou), his sister Alika (Zayiddiya Dissou) and his new friend and protector, Massar (Adam Nourou). They will touch the geographical points of Gonzalo and then Mateo in their flight from domestic abuse, witnessing the killing of elephants, fleeing without knowing for sure where they will arrive and with the sole purpose of surviving.

Director Icíar Bollaín and Luis Tosar come together once again to bring to the screen a very delicate and painful story that very few filmmakers have chosen to do. From what perspective can the struggle of ETA (Euskadi Ta Askatasuna/Basque Country and Freedom) be presented from 1958 to 2018, for an independent country and its decision to do so through the intimidation of the Basque people domestically and using all methods to defeat his enemies and inflict casualties that would shake the center of Madrid? Both in Fernando Aramburu’s novel, Homeland (2016) and the excellent HBOMax series of the same name from 2020 and now on Maixabel, the answer is through both those who suffered the loss of a loved one and the ETA militants who have had time in jail to rethink their ideology and the struggles that led them to murder so many people with the vast majority being unknown . A quartered civil guard, a young representative of a conservative party, a Basque businessman or small merchant who refuses to pay “the revolutionary tax”, a kidnapping that ends in murder, explosives and direct shots at professionals, politicians and ordinary citizens for criticizing the movement are some of the victims of the group. The assassination of Juan Mari Jáuregui (Josu Ormaetxe) in 2000 at the hands of ETA completely changes the life and thoughts of Maixabel Lasa (Blanca Portillo) and her daughter María (María Cerezuela). Eleven years later she is offered the opportunity to face / talk / question the two eterras who killed her husband. She agrees because she needs to know how a human being deprives a stranger of his life. Luis Carrasco (Urko Olazabal) was the shooter and his accomplice Ibon Etxezarreta (Luis Tosar), differ on how to rebuild their lives with a past full of violent acts that not even they can now justify.

In this intrigue film, starring Luis Tosar as Juan, his character is a Secret Service agent who spies on and infiltrates drug trafficking networks and other illicit businesses, but who also works as a destabilizing manager for another network headed by the military and other high-ranking politicians. He meets Wendy (Alexandra Masangkay) posing as a Good Samaritan so she can infiltrate the suspects’ house. As expected, the lonely Juan will lower his guard as he becomes intimate with Wendy, although he always keeps secret the job with which he least agrees. That’s why the half truths and the many lies that somehow attract and unite them. And although he understands that his life is in danger, he continues to look for ways that the damage he has to inflict is not as serious as his superiors want. The film has glimpses of Bourne’s first film (The Bourne Identity, 2002) due to his late awareness and his relationship with the woman who accidentally entered his life. He also refers us to The Accountant (Gavin O’Connor, 2016) for his precision of what he considers fair, even within doing damage.

Japan. Body Perform Live, resistance and resilience in contemporary Japanese art
Rupnik is not the Company
Star Wars: What if Jyn Erso had survived the end of Rogue One | Pretty Reel
Tweet
Share
Share
Pin