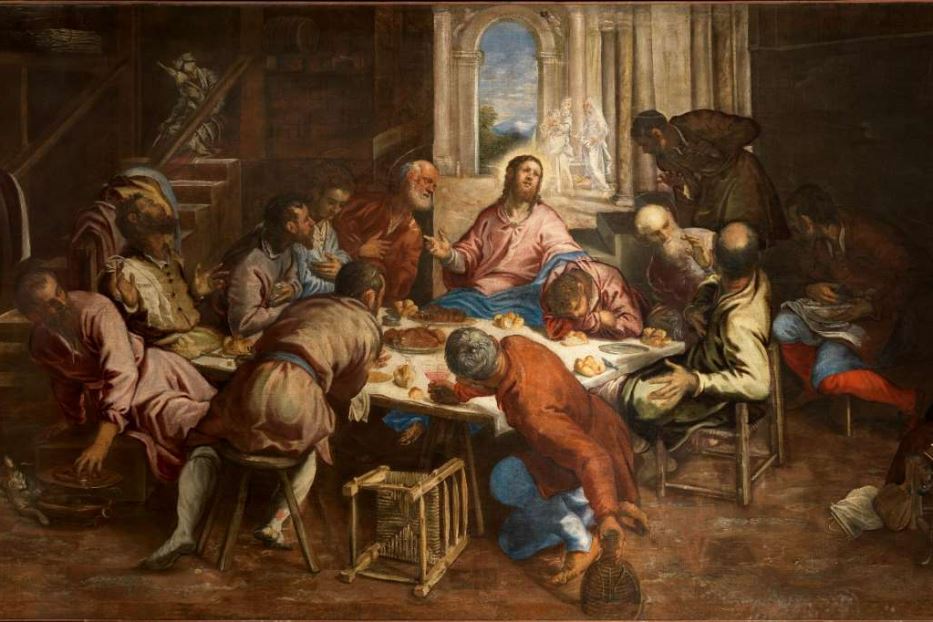 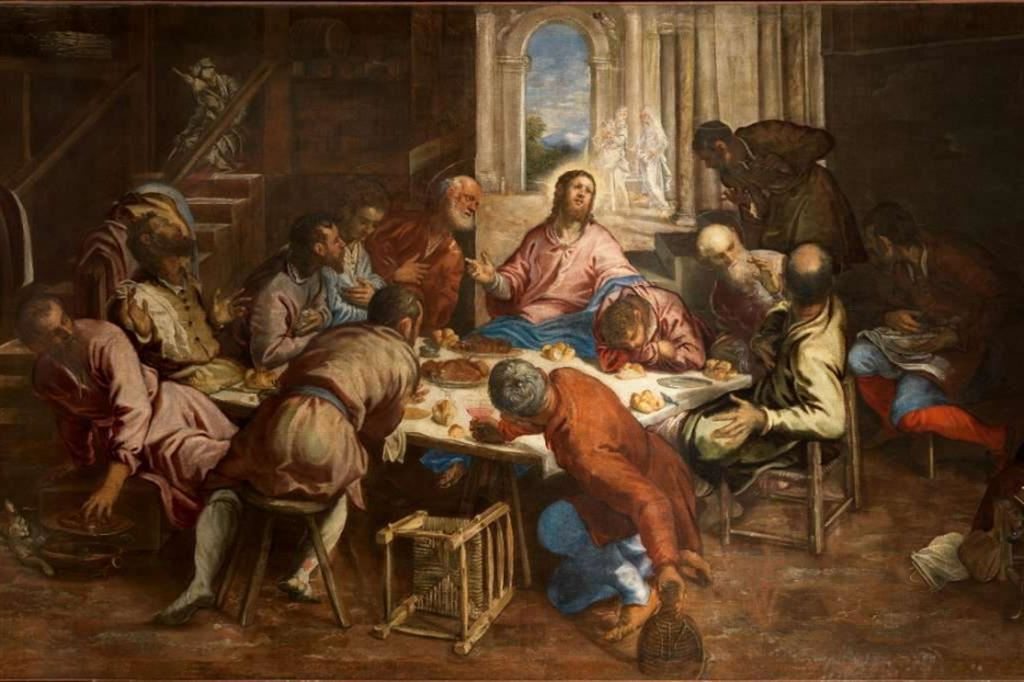 Tintoretto, “Last Supper”. The work is on display in Cuneo until March 5 in the exhibition “The colors of faith in Venice” – Cameraphoto Arte Venezia

It’s an art of storytelling, it’s an art of looking. The Gospel is also this: a territory of inner experience, in which narration and vision are of equal importance. Narrator is Jesus, the Christ who expresses himself in parables so that he can understand whoever he wants, that is, whoever is capable of recognizing himself in the abysmal simplicity of human events, in those stories of fathers and sons, of fields and flocks, of wives who await and of princes treacherously slain. And the evangelists are storytellers, who do not limit themselves to reproducing the Master’s sayings, but choose to retrace his existence, dwelling on what they call “signs” and which we know as miracles. Jesus cures, heals, in some cases even resurrects the dead. Standing out among his prodigies is that of the man born blind to whom his sight is restored, as if to confirm the indissoluble link between gaze and story, the same one we now find in A divine plot (Marsilio, pages 206, euro 16), the book in which the director of Civiltà Cattolica, Father Antonio Spadaro, rearranges the comments on the Sunday Gospels that have appeared in recent years in the “Fatto daily”. An enterprise judged surprising at first, as Spadaro himself admits, but which over time has settled into an unusual “life of Christ”. Unusual because the story, this time, does not follow the chronological development of the events, but concentrates the various passages into three major thematic nuclei: “Take” on the dimension of the gift and of the announcement; “Open up!” on the carnal concreteness of the Incarnation; “What do you want from me?” on the unfathomable dynamics of the request for help and the salvation achieved. But the language adopted by Spadaro is also completely peculiar, who right from the subtitle declares his debt to the arts of vision and storytelling, from literature to cinema without neglecting the contribution of music and painting. Hence the coherence of that Jesus in reverse shot that we find on the cover together with a detail of Leonardo da Vinci’s Last Supper in Andy Warhol’s reinterpretation, in whose art – Spadaro notes – «there is no room for God» or, better , « God is always and only “outside” his work of art», so as to present himself as a sort of outcast or unadapted, according to the formula used by Pope Francis in the preface a A divine plot. Recourse to the narrative dimension is a characteristic that immediately emerged clearly in the pontificate of Jorge Mario Bergoglio. His relationship with the great Argentine writer Jorge Luis Borges is often rightly referred to, whose stories are characterized by the unappealable essentiality typical of the Gospel parables. Even before the undeniable literary suggestions (for example, the Pope’s love for The Betrothed) what acts in Francis is the practice of the imagination, on which the discipline of the Ignatian Spiritual Exercises is based, also explicitly referred to by Spadaro. A bold imagination, however, restless and enterprising. “Sometimes we are oppressed by images of Jesus which are, in reality, more images than effective portraits”, writes Bergoglio in the preface, adding immediately afterwards: “Therefore, we do not need edifying stories, especially in the hard times we live in”. The resounding of the «echo of lead» already picked up in the 19th century by the Jesuit poet Gerard Manley Hopkins is at the origin of the appeal that the Pope addresses at the end of his text: «In this time of crisis in the world order, of war and great polarizations, of rigid paradigms, of serious climate and economic challenges we need the genius of a new language, of powerful stories and images, of writers, poets, artists capable of shouting the Gospel message to the world, of making us see Jesus ». The request derives from the awareness that – these are again Francis’ words – “the plot belongs to history”. To recognize it, the sharp gaze of the narrator is needed, even if it is an unconventional narrator like Spadaro, who preferably draws on Anglo-Saxon culture for his reflections. We begin with a quote from Depeche Mode’s rock, we pass through the paintings of Edward Hopper and the verses of Raymond Carver to arrive, outside the space of the book, at the project of a film on Jesus that director Martin Scorsese wanted to make public as first response to the invitation from Pope Francis. That the Gospel is “a screenplay (never Hollywood)” is moreover one of the fundamental assumptions of the exegetical-narrative path undertaken by Spadaro in these pages which do not resemble any of the many “lives of Christ” that followed one another over the centuries and, at the same time , they generously accept the most authentic requests. The journey described in A divine plot it is in fact a journey into paradox, since it takes the invisible event of the Resurrection as its starting point. But there is no contradiction in this, only the acknowledgment of the fact that ‘God does not tame’, because ‘God is savage. He is by nature – continues Spadaro – because nothing greater can be thought of him. It’s unstoppable.” You can try to tell it, not to tame it. It can be contemplated, if the gaze is patient enough to become a vision.

Spirituality. Spadaro and the urgency of “showing Jesus”

The best war film of all time according to spectators, it's him!
Behind the door | It's not age that counts, it's energy
« Le phénomène “Vatican II” apparaît comme un énorme spectacle de triomphalisme clérical. »
Tweet
Share
Share
Pin