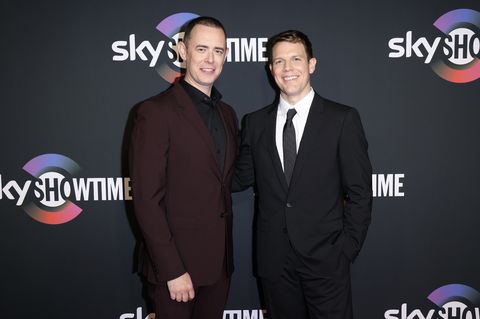 Last Thursday took place in Amsterdam the presentation event of SkyShowtime in Europe, a new streaming platform that is already available in several countries and is scheduled to arrive in Spain in early 2023.

The event was attended by some of the protagonists of its most powerful titles, such as Rebecca Romijn and Ethan Peck, from ‘Star Trek: Strange New Worlds’; Demian Bichir from ‘Let The Right One In’; Clara Rugaard from ‘The Rising’; Bokeen Woodbine and Yerin Ha from ‘Halo’; Jake Lacy and Colin Hanks, stars of ‘A Friend of the Family’; or Jeff Willbusch and Juliana Canfield, who lead the cast of ‘The Calling’.

Colin Hanks and Jake Lacy at the SkyShotime presentation in Amsterdam.

Although the catalog for Denmark, Finland, Norway, the Netherlands and Portugal will offer the bookstores of Universal Pictures, Paramount Pictures, Nickelodeon, DreamWorks Animation, Paramount+, SHOWTIME, Sky Studios and Peacock, the titles that will be available for Spain have yet to be determined. What we do know is that several exclusive series will be offered. Next, we advance some of these releases.

Demián Bichis at the SkyShowtime presentation in Amsterdam.

Crime drama that follows NYPD detective Avraham Avraham (Jeff Willbusch) who will see how his spirituality and religious principles are put in check with a seemingly routine investigation.

Sylvester Stallone stars as New York mob boss Dwight Manfredi who, fresh out of prison after 25 years behind bars, begins to build a new criminal empire.

Continuation of ‘Yellowstone’ and starring Harrison Ford and Helen Mirren, the fiction introduces us to the new generation of the Dutton family in the early years of the 20th century with pandemics, drought and the Great Depression as a backdrop.

Based on the novel ‘Funny Girl’ by Nick Hornby, it tells the story of Barbara Parker (Gemma Arterton), a beauty queen from Blackpool as she tries to make it in early 1960s London. She soon discovers that her best weapon is sense. of humour.

Continues the story of the McLusky family, powerful brokers from Kingstown, Michigan. Jeremy Renner and Dianne Wiest lead the cast. Racism, corruption and inequality go hand in hand in this series that hinges on the attempt to establish order and justice in a city that lacks both.

Spy thriller with Kiefer Sutherland as John Weir, a master of deception in the world of corporate espionage who is framed for murder.

Based on the series of novels by Patricia Highsmith, it tells the story of a con man in 1960s New York who worked for a wealthy family. With Andrew Scott, Johnny Flynn and Dakota Fanning.

Based on the bestselling nonfiction book by Lisa Taddeo, it follows the lives of Sloane (DeWanda Wise), Maggie (Gabrielle Creevy) and Lina (Betty Gilpin), three women from different parts of America who agree to share their stories with Gia ( Shailene Woodley), a grieving writer.

Based on real events, it stars Laylsa de Oliveira as Cruz Manuelos, a young marine recruited by the CIA to join its prestigious Lioness Team that fights against a terrorist organization. She completes the cast Zoe Saldaña.

SkyShowtime: This is the new platform that arrives in Spain