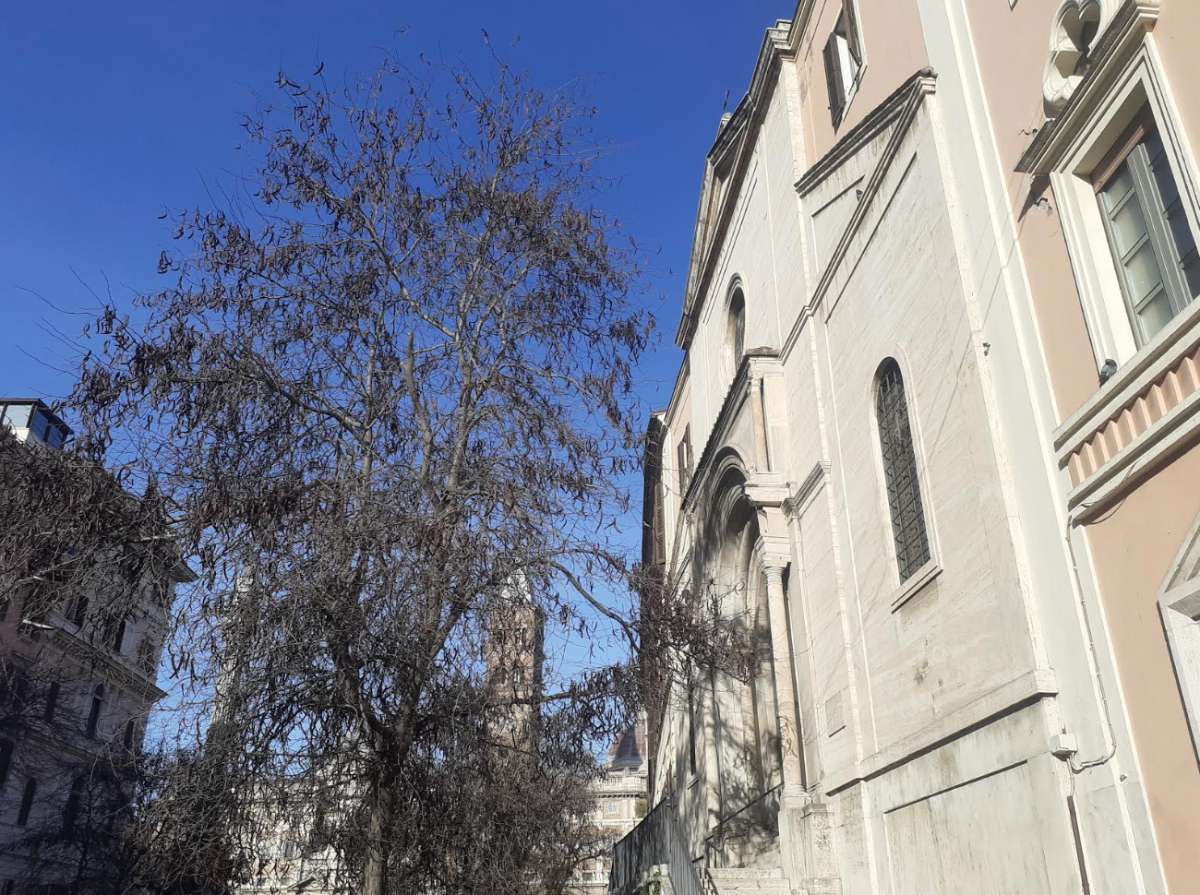 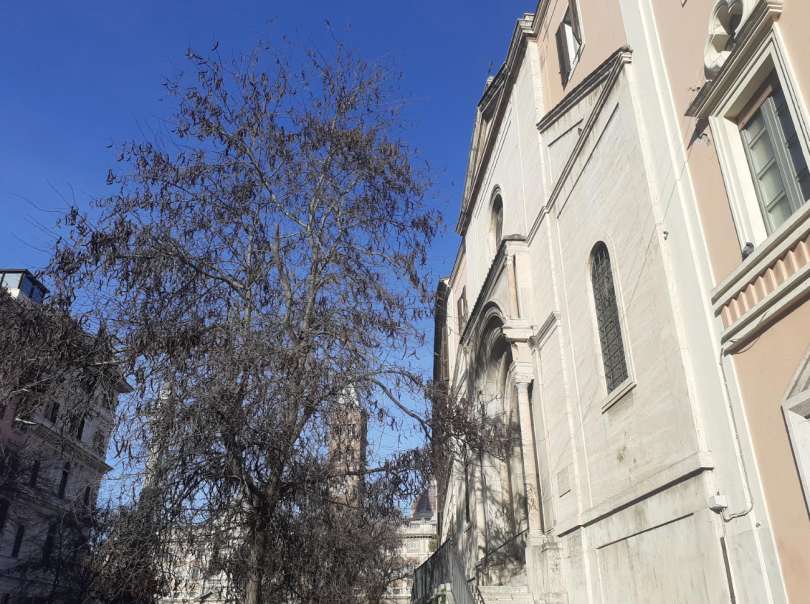 The church of Sant’Antonio Abate all’Esquilino
Photo: AT

The large facade of the basilica of Santa Maria Maggiore is in the background, while in front of the church of Sant’Antonio Abate all’Esquilino there is a widening that opens in front of the large square of the Roman basilica dedicated to the Virgin Mary. If you aren’t particularly careful, the facade of what might seem like a small church – which isn’t that small after all – could go unnoticed: Rome always hides precious pearls where art and faith marry in perfect harmony; this little church that stands on the Esquiline (district of the capital that owes its name to one of the seven Roman hills) and which is located a few steps from Termini central station, is part of this corollary of hidden treasures always ready to be discovered, rediscovered, to be enjoyed for their artistic beauty and for the sacredness they preserve.

Sant’Antonio Abate all’Esquilino stands on the area of ​​the Roman basilica of Giunio Basso whose identity is still debated by historians even if the version that sees it as “consul ordinarius” remains the most accredited. What we know for sure is that a basilica was erected in this place in the 4th century: the dedication of this is preserved in which it is written“IUNIUS BASSUS VC CONSUL ORDINARIUS OWN IMPENSA A SOLO FECIT ET DEDICAVIT FELICITER”. This basilica was later transformed into the church of Sant’Andrea cata barbara; the hospital of the same name was later built near the latter. The Romanesque portal inserted in the facade of the church of Sant’Antonio Abate is what remains of that hospital (today, both the church and the hospital of Sant’Andrea have disappeared); the hospital structure – created in 1259 at the behest of Cardinal Pietro Capocci – served to welcome patients suffering from skin diseases, and – in particular – those who suffered from the so-called “St. Anthony’s fire”, what is known in medicine as ergotism, i.e. the Herpes Zoster virus.

The church of Sant’Antonio Abate was erected in 1308 under the pontificate of Bonifacio VIII. Armellini in his The churches of Rome from the 4th to the 19th century writes: “In the temporal state of the churches of Rome I find the following information: It was founded and erected in the year 1308 under the reign of Philip IV, king X.mo above the square of S. Maria Maggiore”. Little is known about the first church dedicated to the holy monk; only certain news, the presence of a chapel dedicated to the Blessed Sacrament erected by a private individual. The church was then restored in 1481 and, subsequently, in 1517; in essence, the structure we see today is the same as in those years; only the choir and the interior decoration were changed in the 18th century.

A fundamental role for the church was played by Charles Anisson, prior of the Order of the Antonians, who found – in 1593 – the sacred place in serious decay; so it was that he announced a competition for a new chapel to be placed on the right side of the entrance; competition won by the architect Domenico Fontana; moreover, he had a wall built around the adjoining convent, the church and the hospital, making sure that the structures were enclosed in a more harmonious architectural structure. But Prior Anisson’s major work was to decorate the interior of the church with stories of the Egyptian holy monk: frescoes that are still visible. He had an ancient book arrive in Rome in which precious and beautiful miniatures of scenes from the life of Sant’Antonio Abate were kept: these images will inspire the two painters called to decorate the church, Nicola Pomarancio and Giovanni Battista Lombardelli. It is necessary to remember that the frescoes that are visible today were restored-repainted – by an unknown artist – in the 18th century. These admirable frescoes cover all the walls; those who enter seem enveloped by the stories of Antonio Abate; it is the great pictorial “film” of the saint that flows before us thanks to some frames such as: The victory over the black devil in the figure of the hideous child; The healing of a possessed man; Reptile hunting.

But perhaps the most important fresco is that of The death of the saint in the Fontana chapellocated to the right of the entrance. This work draws on the version of the saint’s biography written by the Christian monk, writer and ascetic Evagrius: “From his serene face one could recognize the presence of the holy angels who had descended to accompany his soul up there”. It is a sublime description of the monk’s death; a moment full of profound sacredness that can be relived in the colors and shapes of the painter Lombardelli.

As pointed out earlier, the church has experienced several renovations over the centuries; much was reworked in the 1700s; to these years we owe, for example, the building of the choir (1724); the masterful fresco de The Crucifixion by Giovanni Odazzi, placed above the same choir; some depictions of the holy monk as The birth of St. Anthony and St. Anthony as a child (executed between 1730 and 1732 by an unknown artist). After the dissolution of the Antoniani order – merged into the order of Malta – the church was entrusted to the Camaldolese family and subsequently – for a short time – to the Sisters of Charity until it was destined, in 1932, to the Russians of the Byzantine rite who still own the church today. Other works were due to this new use of the sacred place: for example, the choir was isolated from an iconostasis, the work of the Russian painter Grigorij Pavlovic Maltzeff; the spaces of the old hospital were transformed to house the Collegio Pontificio Russicum, a center dedicated to the study of Russian and Eastern culture and spirituality entrusted to the Society of Jesus, where students of the Catholic and Orthodox confessions have the opportunity to stay and study. Here, in the refectory hall, the works of art of a world-famous iconographer, the German priest, Jesuit, scholar and art critic Father Egon Sendler, a student of the Russicum, can be admired.

A fascinating story that of the church of Sant’Antonio Abate all’Esquilino; a story that contains precious pearls of history, art and faith. And anyone who enters it on Sunday at 10.00 for the Divine Liturgy, celebrated in the Byzantine rite, can experience a moment of profound spirituality, of dialogue with the Lord, intimate and profound.

Today, at 18.00, the Divine Liturgy will be celebrated presided over by Father Germano Marani SJ, rector of the church, professor of oriental dogmatic theology at the Pontifical Oriental Institute and of Missiology for the Pontifical Gregorian University in Rome.