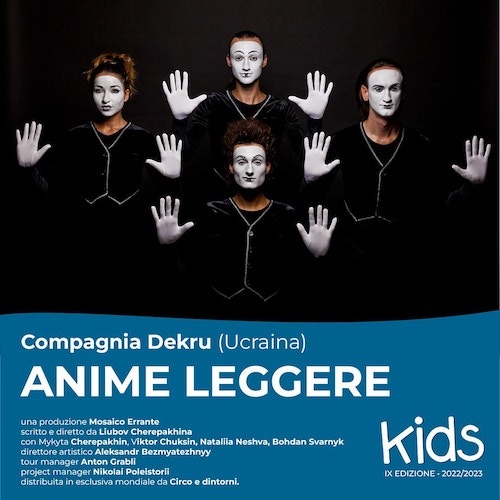 SAN SEVERINO MARCHE – After the sold outs recorded in the three dates scheduled between the end of October and December, theJanuary 8 at 18 opens the new cycle of appointments of the SIC / Stable of Circus Innovation at the Teatro Feronia in San Severino Marche with the Dekru Ukrainians who stage Light souls, a show suitable for the whole family, to end the festivities at the beginning of the new year with a smile.

The quartet was chosen to perform during Pope Francis’ Audience for the Jubilee of Popular Entertainment, won numerous awards (winner at the World Circus Festival in Moscow and at the Clown and Mime Festival in Odessa) and amazed the jurors by Ukraine’s Got Talent and Tu si que vales Italy.

Written and directed by director Liubov Cherepakhina, a teacher at the renowned Academy of Variety and Circus Arts in Kiev, Light Souls takes the viewer on a journey full of laughter in the comedy of life, between poetry and social satire, with a look that is both ironic and delicate .

Four figures dressed in black and made up in white enter an empty stage and with the sole use of the body they evoke the most imaginative scenarios. A cheerful circus, an Olympic competition, a mysterious underwater world and much more appear before the eyes of the public. Sometimes as in a 3D film or in an augmented reality experience, others as in an old black and white film, sequences taken from everyday life are presented, made up of comical tics and funny situations, but also dreamlike love stories between two living statues and poetic portraits of nature.

A series of independent scenes that compose a great and hilarious story, between realism and imagination.

The Dekru are mimes that leave… speechless!

The SIC/ Stabile di Innovazione Circense, a new project signed by Circo El Grito, after the sold outs in Rome at the Teatro Vascello and the shows scheduled at the Auditorium Parco della Musica returns to the Marche region, in San Severino Marche, with a long-awaited show by the founders and artistic directors of Circo El Grito, Fabiana Ruiz Diaz and Giacomo Costantini.

Written and directed by: Liubov Cherepakhina

Spiritual heirs of Marcel Marceau, the Dekru are an award-winning quartet of Ukrainian mimes (winners at the World Circus Festival in Moscow and at the Clown and Mime Festival in Odessa) whose physical virtuosity has brought planetary success to a show which, thanks to a a universal language that needs no words, it has amused and moved countries around the world, including France, Germany, Polynesia, Tahiti, New Caledonia, Belgium, the Netherlands, Poland and Switzerland, as well as Italy, Russia and the Ukraine.

On television, the jurors of Ukraine’s got talent and Tu sí que vales Italia were amazed. They were chosen to perform during Pope Francis’ Audience for the Jubilee of Popular Entertainment and are among the protagonists of the Gran Gala du Cirque, a show that brings together the best international circus performers in one big evening destined for prestigious stages.

Presale at the Pro Loco from the Tuesday before the show, sale at the Feronia Theater box office from 6pm on the day of the show

Feronia box office
Tel. 0733 634369
on the days and opening hours indicated above

The 10 Most Powerful Sith, According To Reddit
The Rings of Power: The Lord of the Rings prequel TV series reveals where Frodo went after the Retur...
Les 25 Meilleurs Films originaux Netflix
Tweet
Share
Share
Pin