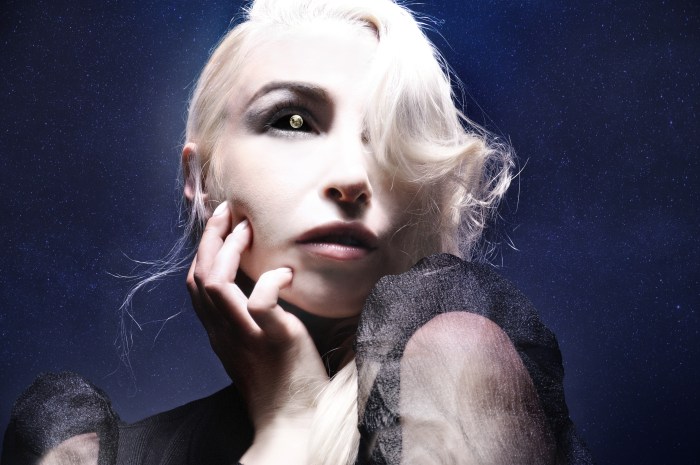 From the debut on the stage of Sanremo Giovani in 2007 to the single “Werewolf” and the meta-book “Rottocalco Vol. 2”. The Roman singer-songwriter Romina Falconi puts other pieces to his important artistic career before the release of the new album “Heartbreak” in the next months.

A “very sparkling” period for Romina Falconi who will return from 24 November on stages throughout Italy with Immanuel Casto with “Teach me La Vita Tour”. Special appointment Monday 21 November at the Ostello Bello in Milan on the occasion of the Milan Music Week with its format Heartbreaking Listening Center together with the psychologist Monia D’Addio (info here) in which the artist “listens instead of being listened to”.

Hi Romina! Let’s start from the beginning: in 2007 you participated in Sanremo Giovani with “Ama”, what experience was it?
I have a beautiful memory, I was a little girl. I started singing very early, I had done a lot of piano bar and even the festivals then I found myself catapulted on the stage of Sanremo with a song written together with my friends at 17, a dream to be there … It was truly a magical moment.

Then in 2012 you participated in X Factor. What moment was it?
Honestly, I don’t have good memories. When I participated in the talent show I already had a historian, then for those who want to compare themselves and make up their ranks it is a huge gym. I touched the part of that strange new wave of the 80s, that of the singer is an acrobat’s job and you have to learn on the field. But thanks to that experience I understood what I didn’t want to do, it was fundamental.

All this to get to the fundamental question: who is Romina Falconi today?
Wow, a really difficult question… I am a girl born and raised in Torpignattara, a difficult neighborhood in Rome, who has sung all her life, and has also had the impostor syndrome among other problems. I spent a lifetime homologating, I thought that the real me would never go well, I worked hard to realize that instead I just had to live as I wanted. Understanding this was a superhuman effort but when you hit rock bottom and you have nothing to lose you have to make choices, after a series of sad and difficult situations. We are in an era in which the singer-songwriter feels she has to succumb to her biography, you have to be educational in some way: well, I start to put this vein in my songs and slowly I am called to the clubs. I thought: “Do you want to see that in the end this oddity that I have been fighting all my life has something good ?!”. I found myself one day wanting to talk about shadows, I didn’t want to pretend to be the girl next door: I look like I came out of a Pasolini film, my friends came out of the “Thriller” video … Now, after years of my apprenticeship I can keep myself being a singer-songwriter and it became a job with the songs that I was most ashamed to release because I thought who knows what others will think … Now, especially after the pandemic, the more you try not to homologate, the more you are rewarded.

And with Immanuel Casto?
With him I make duets for the sake of making them. Then they work. We have become best friends over the years. The covers of my singles are made by him, “Rottocalco” has laid it out for me. I listen from Wagner to Dream Theater, then I like to give him references… we created a company, born as a created factory. We are multi-purpose artists and we are obsessed with America. When we were opening the label, nobody believed it. From there it all started, now we are almost brothers.

In your latest book, “Rottocalco Vol. 2”, you tell us that as a child you went on vacation to your grandmother’s house and heard howling from the neighbor’s house. Then your interest and fear for the werewolf was born. What does this figure represent for you?
During the full moon we heard these long, almost painful howls and from the bathroom window we tried to see a tuft, a shadow but nothing … Among all the monsters the werewolf has always been the one that has always really scared me. This song was supposed to be called “Croce” but then thinking about the neighbor and myself it became “Werewolf”. We are a bit ‘all werewolves, when we remain alone in our homes it is only us who deal with our inner monster. We are all werewolves, we don’t really put our existential crises on social media, I can’t take it anymore with this toxic positivity in which you always have to look winning and smiling. For me it’s hallucinating, it doesn’t have to be forced.

There is also a comic part where you sing your new single “Lupo Werewolf”
All thanks to that genius of Marco Albiero, official designer of the European merchandising of Sailor Moon and Knights of the Zodiac, he worked with Immanuel Casto on the game of “Witch & Bitch”. I asked him to turn the song into a comic. When he gave me the boards I was moved. After the single and the book, the album will be the last thing to come out, full of contributions and with the idea of ​​remaining in time.

In “Rottocalco Vol. 2” there is also a long part in which you make a “Trial to God”. But how did you come up with it?
I am crazy! I believe but I am not Catholic, each of us has his own spirituality, I believe there is someone who sometimes overestimates us. For me God is a fetishist of free will: we expect a person who has power to use it, but it is not so, so much so that then everything happens. I am the black sheep in my family, I question many things in religion, I believe that God belongs to everyone, even those who do not want him. The only way to address this issue is from a philosophical point of view and I imagined this: an 11 year old girl wakes up and decides to bring God to trial who has ten lawyers represented by the most famous saints, the mainstream ones while the girl has a simple official lawyer.

In the book there are also the contributions of Monia D’Addio, psychologist, with whom you founded the Rottincuore listening center. But who is the heartbreaker according to Romina Falconi? Give us an identikit
You see, instead of doing the firmacopie we have founded a real listening center for anonymous heartbreakers. In those situations I become Tata Francesca (“La Tata” is a 90s television series starring Fran Drescher ed), are enjoyable. I liked the idea that a professional would intervene, so I called Monia D’Addio. The heartbreaker is a person who has been a bit cracked by life and is not satisfied with appearing as a winner: among some of my fans there are engineers and professionals in general but they are people who do not like to feel sorry for themselves. The heartbreak gets involved and will never feel complete, in love it is a disaster, it represents interrupted people who fight and tell their stories, and sometimes they are crying … On November 21 we will meet at the Ostello Bello in Milan for the Music Week. What is said at the listening center remains at the listening center, as in the Fight Club.

The name of your next album is “Rottincuore”, do you take inspiration from them?
Yes, it is dedicated to them. I’m also a fanatic of psychology books. I’m nerd, I’m locked in the house as if my songs were poisoned potions … You have to know that if you are part of a niche, the people who choose you necessarily like you because you didn’t go to get it from the pile, you chose them.

But are you also a heartbreaker?
And certainly! We all have cracks in our hearts.

On November 24 the tour with Immanuel Casto will start from Pisa
We had promised ourselves to do it, we laugh too much above and below the stage. We combine all the colors.

What can we expect from Romina Falconi and Immanuel Casto on stage together?
You don’t have to expect regularity, it will be total madness. There will be some spoken interventions, Immanuel is the perfect partner. We divide the concert in two, we divide the repertoires perfectly, madness is the only denominator. It will be all a party, we praise our healthy madness. In the meantime, we have chosen to start with the stages that neither of us has touched in the last year and then the dates of Milan and Rome we will do in 2023.

Romina Falconi: “I’m no longer the girl next door”