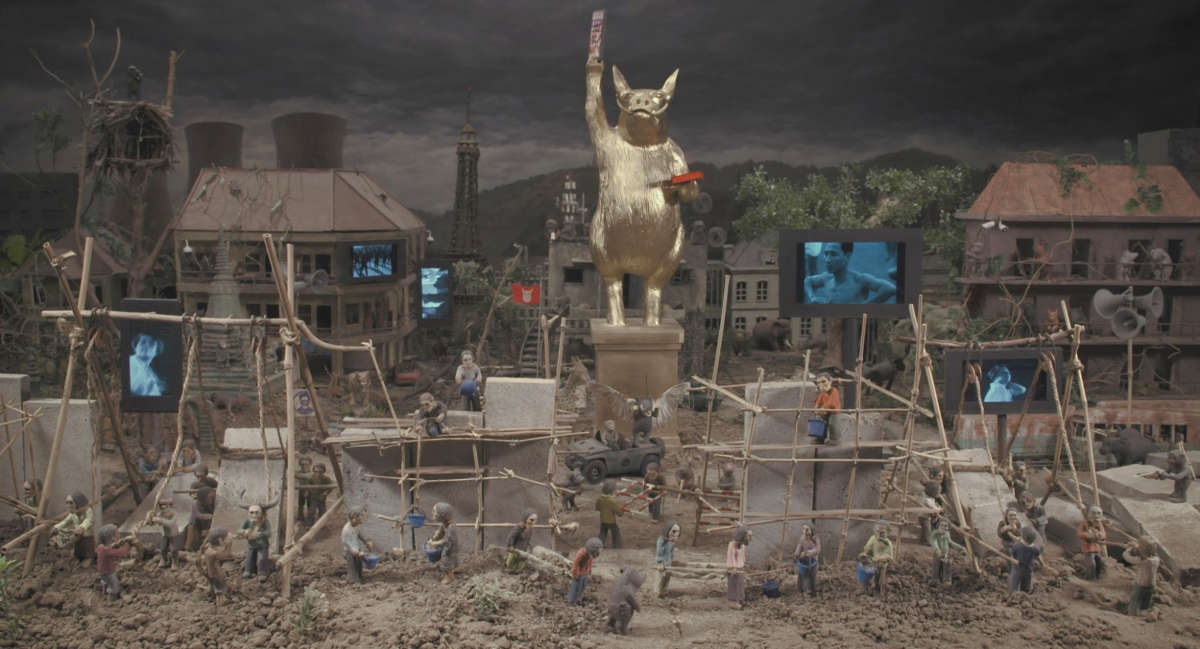 While his latest film, the dazzling “Everything Will Be OK” broadcast this September 8 on Arte, borrows from the aesthetics of the fable, the director advocates stepping aside and time for reflection in the face of our lifestyles. . Maintenance.

For more than twenty years, each new film by Rithy Panh has marked one more step on a path that has led him towards ever greater freedom. After resurrecting his loved ones as clay figurines (The Missing Image, 2013), pushed the metaphor very far (Exile, 2016) and searched for wandering souls at the scene of the Cambodian genocide from which he escaped (The Nameless Tombs, 2018), after having opened up to the mass murders perpetrated in Auschwitz as in Hiroshima (Irradiated, 2020), the man who was for a long time the documentary filmmaker of Khmer Rouge barbarism further widens his field of reflection and experimentation, by signing Everything Will Be OK, a work of anticipation that envisages a world in which animals have taken the place of humans. These creatures, long enslaved by their bipedal cousins, question the history of their predecessors, exploring the traces that they produced, from the creatures adorning the walls of Lascaux to the news images ingested all day long by the consumers we are. Whether Everything Will Be OK brings together characteristic elements of his cinema, he manages to surprise us once again, by exploding more than ever the framework of the documentary genre. As the MoMA in New York prepares to devote a retrospective (from September 28 to October 23) and that his film is broadcast on Thursday September 8 on Arte, Rithy Panh spoke to us about his work and his vision of the world from Phnom Penh, where he partly lives.

How did you come up with the idea ofEverything Will Be OK ?
I had another film in mind, but it required travel that the Covid crisis did not allow. What could I do? With the confinement, the deserted cities reminded me of Phnom Penh under the Khmer Rouge regime. Seeing animals enter and take over the streets gripped me. It had been a long time since I had heard nature so distinctly, so long since I had looked so much at the sky, empty of traces of kerosene. Questions plagued me. Why this virus? Why were we locked up? Why these violent clashes, all day long, around the vaccine and health policy? The invectives, on the social networks, prevented any dialogue and any reflection: it was noise, vociferations similar to those of pigs. Totalitarian forces found themselves almost everywhere revitalized. Donald Trump was talking about bleach injections. During the attack on the Capitol, a guy appeared with buffalo horns on his head…

Animality, present in several of your films, takes its place in this one…
before invoking animal farm, of George Orwell, and the fables of La Fontaine, I thought of the characters, half-men half-beasts, from mythology; but also to Rhinoceros, the play by Eugène Ionesco in which the inhabitants of a city are transformed into horned beasts. I then dove into social media — awkwardly. What did I take, remembering that the vaccine helps protect others, not just yourself; and that in Japan people wear masks in the subway to prevent the spread of the flu in winter. What could I have brought down!

“Chris Marker’s cinema allowed me to understand that being free is essential. That we must conquer this freedom and then everything becomes possible.”

Freedom of expression and its shortcomings are among the underlying themes of the film.
Today, we often reduce the idea of ​​freedom to battles of tweets, of rag pickers. What about the freedom exercised by René Char, Albert Camus or Gilles Deleuze? The film revolves around that, but also about totalitarianism, consumer pornography, aculturation. It is dense—perhaps too much—and violent; but if spectators stay until the end, I will be happy. Why refuse to see what we are participating in? This is a subject that has haunted me for a long time. When we have to face the genocides and the bombings that we have committed, we find it cruel. Why ?

What responses do you see to the situation you are describing?
We need to question the way we live, work and consume. Take the children out of school, take them to the forest. They will not become vegetarians, but they will apprehend their environment, appreciate the world they inhabit, look at the sky, hear the birds. I believe in the virtue of pedagogy. For the past year, I have been going back to the forest every two or three months, like the little man in the film, to live with people who have no network, no electricity. It is not a return to the earth, but a return to oneself. Having nothing, for a week or two, allows you to appreciate things. However, there are many things in the forest, traces, souls, stones to talk to. The air there is air, the sky, sky. Sometimes we hear a plane go by, but we can still drink the water from the river and eat what we pick or hunt in this forest, where I was sent in my youth, under the Khmer Rouge, and that for thirty years I watched from afar.

Could your next film be dedicated to him?
Possible. Because it will disappear, shot or burned.

Where does this propensity to push creative freedom ever further come from?
I owe a lot to Chris Marker’s cinema. When I started making films, I was very influenced by Russian filmmakers, Andreï Tarkovski or Alexeï Guerman. I locked myself in the spirituality of their cinema. And then Marker landed in my work. I did not know him personally; but, when I’m editing, I often hear him say to me: “Dig, try, shake things up a bit. » It allowed me to understand that being free is essential. That it is necessary to conquer this freedom and then everything becomes possible. This is why I advise my students to carefully watch his films, which are not always easy and which I have not always understood. Maybe I wasn’t ready. And why always want to understand everything? Marker made cinema as one speaks or as one cooks—modestly.

Everything Will Be OK is dedicated to your friend, the journalist James Burnett, and the young Burmese Kyal Sin, died a month apart during the making of the film.
James was in love with Cambodia. He participated in the writing of Bophana, a Cambodian tragedy (1996) and always helped me a lot. He was a clear-sighted and extremely generous guy. As for Kyal Sin [abattue à 19 ans par la junte militaire, alors qu’elle manifestait contre le coup d’État du 1er février, ndlr], she died when I was wondering about totalitarianism. Making the inscription then present on his T-shirt the title of the film was a way of saluting his courage and integrity. Navigating in the dark makes it necessary to stare at a star, which tells us where north is. Like Bophana [jeune résistante cambodgienne arrêtée, torturée et tuée en 1976 par les Khmers rouges, ndlr], Kyal Sin had a short but very bright existence. She reminds us of what freedom is and invites us not to get depressed, to stay positive despite everything.

Rithy Panh: “You have to get the children out of school, take them to the forest”