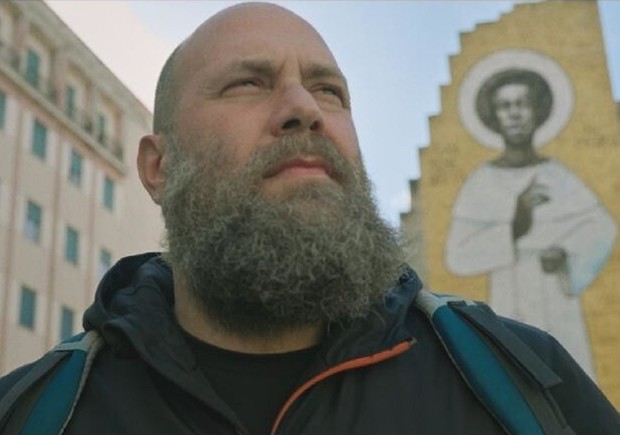 08/30/2022 – In his documentary, Giuseppe Lanno meets the Sicilian painter Igor Scalisi Palminteri and has a long conversation with him about life, art and freedom

Igor Scalisi Palminteri in The most useless seagull in the world

Directed by Giuseppe Lanno and presented in world premiere during the fifth edition of Nòt Film Fest of Santarcangelo di Romagna, the documentary The most useless seagull in the world [+leggi anche:
trailer
scheda film] it basically consists of a long conversation with the eclectic painter Igor Scalisi Palminteri, during which questions about the nature and role of art, about freedom and, more generally, about the meaning of life are dealt with in different everyday contexts and in a quite spontaneous way. Right from the start, we discover that the Trapani artist is the author of splendid murals and has developed his own vision of existence rich at the same time in concreteness and spirituality.

Each of his works has a history and conveys a precise religious, philosophical and sometimes even political and social denunciation meaning, as for example in the case of the fascinating mural of San Benedetto il Moro (which he defined as “an Afro-Italian of the sixteenth century”) or the triptych dedicated to Father Pino Puglisi, brutally killed by the mafia in 1993.

The sequence set in the bumper car is one of the most effective and it strikes how important it is for the painter to “take care of Igorino” and find his “inner child”. It is a necessary approach that the artist adopts to accept the discouraging reality by which he is surrounded, to create in freedom and, probably, also to build a stronger and more direct relationship with him, his daughter.

Some technical flaws reduce the quality of the final result: a handful of transitions lack fluidity in terms of visual and sound editing; there are a little too many interlude sequences (often lengthy descriptive and able to add little to the narrative sector of the film) and the music of Angelo Sicurella, although well done, they are not always organic with respect to the stylistic code and the spiritual and philosophical tone established by the film and by the topics discussed. Nonetheless, The most useless seagull in the world remains a sincere, simple and genuine product: Scalisi Palminteri is undoubtedly an interesting subject to listen to and, on the whole, succeeds in fully explaining his vision of life and art, with great lightness and frankness. “There are artists who concentrate the whole work in the creative gesture. [..] I find the gesture interesting. Not to paint a door [per esempio], but to steal that piece of town. I find it a truly romantic gesture, ”says Scalisi Palminteri at one point and it is perhaps a summa that makes us fully understand the love she feels for her community and for his profession. In this freedom to “steal”, learn and discover Scalisi Palminteri finds his lifeblood and this energy of his reaches all, without filters, from the big screen to the spectators.

The most useless seagull in the world was produced by Giuseppe Lanno e Rita Tura.

Review: The most useless seagull in the world