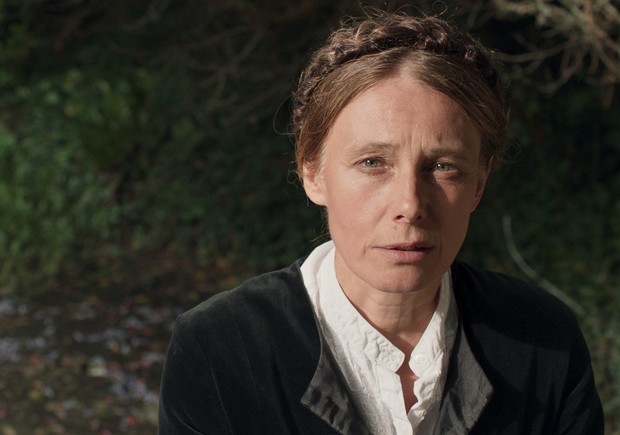 02/09/2022 – VENICE 2022: Frederick Wiseman tries his hand at fiction for the second time and delivers a radical work on the passion and torments of Sophie Tolstoy for her famous husband

Nathalie Boutefeu in A couple

“The true poet consumes himself and burns others.” At 92, the American filmmaker Frederick Wiseman decided to pass through the mirror of fiction a second time, abandoning the field of documentary where he excels to risk himself on a highly inflammable territory, that of amorous passion, married life, lovelessness and despair. And like his first attempt The last letter [+lire aussi :
bande-annonce
fiche film] (2002), the director chose to freely adapt (with his actress Nathalie Boutefeu), as a single-character monologue, mostly epistolary material. A couple [+lire aussi :
bande-annonce
fiche film]unveiled in competition at the 79e Venice Film Festival indeed intertwines the diary of Sophia Tolstoyhis autobiography My life and Letters to his wife of Leo Tolstoy (from 1862 to 1910, the very famous Russian writer and his wife exchanged 840 letters).

But if it thus plunges far back in time, the film is nonetheless very contemporary through the portrait that emerges little by little: that of a woman of stifling character as the devoted wife of a man (dubbed of a creative genius whom she loves and admires) and torn by very contradictory feelings (at 18, she is having a “wonderful and terrible” wedding night and the rumor is already blowing to her that her husband has a two-year-old child with a neighbor of their domain).

“Is our life together over?”. Strolling in the sunny nature of majestic beauty of the immense garden of La Boulaye in Belle-Ile, in Brittany, where the cliffs overhang large rocks resistant to the waves and where the green setting shelters flora and fauna that the filmmaker details in all its multiplicity, Sophie Tolstoy (embodied by a remarkable Nathalie Boutefeu) recounts her stormy marital existence (“I want to remember what united us for many years”, “your strength broke me, annihilated my personality, I spend my time stifling my gifts for you, neglecting myself, sacrificing myself for my family”). Barometer of mood changes, intimate wounds, quarrels and reconciliations, the weight of the responsibility of domestic life, unsatisfied cravings for spiritual osmosis, death wishes, but also of a poignant love that remains in shreds, the film sketches timeless feelings with which many women today can unfortunately still easily identify and brandishes a very unflattering mirror on its male counterpart, the selfishness of the artist Leo Tolstoy not helping the case.

Visually splendid (a signed photograph John Davey) and of undeniable strength, A couple nevertheless remains a film of difficult access for all because of its “theatrical” radicalism based on the monologue. You have to agree to let yourself go completely to appreciate this work that mixes softness of the frame and violence of the subject, the very short duration (63 min) of the film helping.

Produced by Zipporah Movies and Wat Films (USA) with Meteor Movies, A couple is sold by The Party Film Sales.