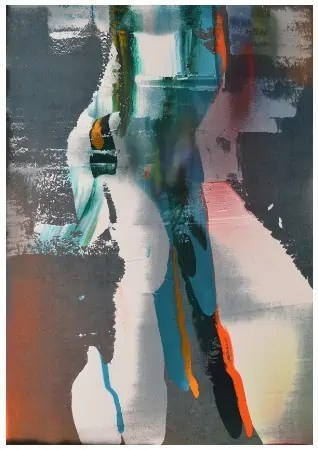 Rémy Hysbergue is a French painter currently exhibited at the Richard Gallery in Paris. The following text is an assemblage of several remarks made by the artist during a series of interviews for the magazine untitled. Free and futile (according to the artist), these selected pieces inform about his formation and his influences. They specify his conception of art and the reflections at the start of his practice.

I studied at the Applied Arts where I made cartoons and textile creation. I learned to work fast and to work by mixing things from here and there. I had a very good art history teacher. Then I did the Decorative Arts where I didn’t learn anything in terms of painting but where, on the other hand, there were courses on Bach and on the sacred which were magical. I come from a fairly popular background, I didn’t see a painting until I was eighteen. It was already huge that I could get to the Decorative Arts in Paris. I struggled a bit before starting to think and before making my parents believe that I could be a painter. But it served me, I knew it was going to be long (and it’s still not over). I learned to have a certain degree of requirement. I didn’t dare to paint for the first ten years after my studies; I made little drawings.

I was interested in Agnes Martin and Richard Tuttle who managed to arouse an emotion with very little, I liked that. And then afterwards, it bothered me a bit. I still wonder how Agnes Martin could have done this all her life. In fact, I believe that it is no longer painting, it lacks a box to define what it is. We put it in the painting category but I think it’s something else. You shouldn’t look at her as a painter. It’s another way of thinking and being in the world. It’s a bit like haikus in poetry: at first they didn’t make poetry. When Matsuo Bashō writes, he is not doing poetry. For Martin it’s the same thing, it’s a trace of life but it’s not painting. The end of his work is more of a spiritual quest. She has written about it. I sometimes wonder if she shouldn’t have burned her paintings or thrown them away. She knew how to throw, she threw some.

It’s a bit like the tantric drawings in India that have been done for millennia. When someone is sick or not well, they can go see someone who draws very simple things for them (a circle, a sky blue square) on a small piece of paper. It’s not a medicine, it’s a kind of, I say it with my Western words, support for rebalancing. These drawings are wonderful. One of the first to have exhibited them was, I believe, Jean-Hubert Martin, in the exhibition “Les magiciens de la terre”. Cleverly enough, he had put that next to a Daniel Buren. These little drawings slapped a lot of artists but, behind the formal similarity, it wasn’t the same approach, and above all, it wasn’t meant to be exhibited there. Jean-Hubert Martin had an awareness of objects. He had a point by mixing profane and sacred objects.

But, if you make an exhibition by showing only these drawings, on the one hand it’s very vulgar, and on the other hand it distorts what it was made for at the start. We shouldn’t be able to cut into the real in this way, take a piece of it because we think it’s nice. It transforms everything. Initially, these drawings were anonymous, but when some realized that they aroused interest, they began to sign them. At that point, we lost all meaning because the idea was precisely that you had your drawing for a day. It acted as a sort of abstract talisman but then you threw it away or burned it; it was not meant to be kept or collected.

Going back to Martin, maybe she should have stopped painting like Degottex stopped when he went to a Zen monastery. There are people who die early, there are those who decide to stop and there are also those who continue and whose work sometimes weakens. I don’t want to exaggerate, Martin’s work is not unwatchable, far from it! It’s just that sometimes he’s a little cutesy. This is also the case for Pierrette Bloch, her work at one point was diluted. I wonder if there hasn’t been a museumification of Martin’s work, linked to the market, because in fact she produced very little. But he’s an interesting person and I watched him quite a bit.

I also read what she had written. The demands of what she does, her relationship to work, humility and pride interested me a lot. Workshop work requires this requirement. I have an old painter colleague who says that a painter can be seen twenty meters away. It’s not so wrong. It’s irrational to be a painter after all the people who came before us. If you don’t have a tiny bit of humility, but at the same time a tiny bit of pride, you don’t start painting.

When I graduated from Decorative Arts, I didn’t paint for ten years, even though that was what interested me. I did not see where to attack the subject, it did not seem possible to me. Now I do it because I had to start doing things and have fun, but if you go to the Louvre for just an hour, there’s reason to want to stop everything. How did they manage to paint a picture like that…? They came from space, it’s not possible… Think of Franck Stella, imagine the thickness of a catalog raisonné of Stella’s works! Certainly, there is not only good but one wonders how it can be the work of a single artist. Did he get cloned? Artists of this stature, there are not many…

Among my contemporaries, there is an artist who interests me. His name is Thierry De Cordier and he does a funny painting. He is trained as a philosopher. He paints very little, he exhibits very little and he refuses any catalogue. There are people like that, a bit weird but alive. Martin Kippenberger has done some very good things. I find that Julian Schnabel, at one time, had done some interesting things; with color, velvet, there was one thing he knew how to do well. There aren’t many people whose work I really revere, whose work I’m like, “Wow! He or she has done that again”, but there are still very great artists. For example, every time I go to see a Daniel Richter exhibition, I take a slap; I say to myself “no he didn’t dare to do that”, and in fact he did, and I appreciate it. Or Albert Oehlen, I often say to myself, “he pushed that aspect again”.

There are impressive people but, overall, we stick too much to an era. There are many works which are exactly what is expected now and which, in six months, will be just has-been. I feel a lack of depth, heaviness. It’s not nostalgia. Godard died not long ago. I must have seen three-quarters of his films. He was someone, every time I went to see one of his films, after five minutes, I had almost had enough of it, it was so rich, it called into question the way I was going to watch this film, which I used to watch films, and how this habit could be changed. Monsters who think about what it will be like before it happens, in painting, I would have a little trouble quoting you.

But it’s the time that is like that, we have to digest billions of images every day; you would have to be isolated in a forest for thirty years and still want to paint to make works that would stick less to the times. If you want to do a somewhat serious painting, you have to digest that, it takes time. Three hundred years ago, we went around the two three places in Europe and we had gone around the painting. Even if there were other things in other civilizations, we didn’t know. Now, we can do it from our armchair but there are billions of images, billions swallowed, digested and spat out by others. We have to put it all together.

One of the solutions is to start from what made the painting, independently of any movement (in any case, there are no more movements). For me, it’s the light, the touch, the concern for the composition because, on this point, there is, in my opinion, a lot of laziness. For me the question is “what do we do with it now?” »