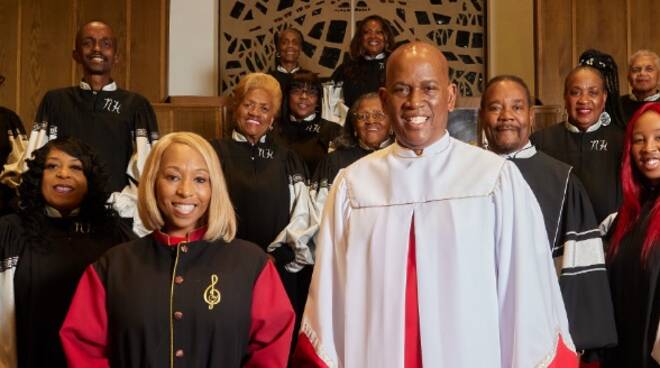 Thursday 29 December, in Piazza del Popolo in Ravenna the second evening of Christmas Soul Festival. To entertain the onlookers the French formation Gospel Soul Celebration which, for the second of the four scheduled appointments, provided a fascinating combination of tradition and modernity, between the classic sonorities of sacred black music and new interpretative styles. Thus continues the fourth edition of the gospel music festival organized by the Municipality of Ravenna, Spiagge Soul and the Ravenna Manifestazioni Foundation, which offers only free concerts to celebrate the Christmas holidays and the arrival of the new year under the banner of the Christian musical tradition of the African American people .

The Christmas Soul program continues with the show in Piazza del Popolo by Brent Jones & T. P. Mobb to greet 2022 on the night of December 31st starting at 11pm. The group arrives on tour in Italy for the first time after having climbed the charts thanks to the successes composed by maestro Brent Jones, producer, musician and choirmaster who boasts numerous Grammy and Stellar Awards nominations.

Producer, musician and choirmaster who boasts numerous Grammy® and Stellar Awards nominations, singer and songwriter of extraordinary talent. With his urban group Brent Jones & TP Mobb he laid the foundations for Kirk Franklin and contemporary gospel. JDI artist Brent Jones’ new album “Nothing Else Matters” is the highly anticipated follow-up to “Open Your Mouth and Say Something,” which topped the Billboard charts for over 54 weeks, garnering widespread critical acclaim and numerous award nominations, including the 2019 Dove Award and the 2019 Stellar Award. A California native, Jones has had the opportunity to produce several projects, conduct many talented choirs, and assist hundreds of audiences, while carving his own space in the music industry. gospel music USA with his group, the TP (Total Praise) Mobb. Known for their hip-hop influences and electrifying beats, TP Mobb have been able to inspire not only young people looking for a unique Christian expression, but also people of all ages who love good music with an exciting and uplifting message. For years, Jones and the TP Mobb toured the world and recorded popular hits like “Midnight,” featuring Coko Clemons of R&B singing trio SWV, and “Goodtime,” the head-spinning groove featured on WOW Gospel 2000. With appearances on major programs network TV such as The Tonight Show and having toured extensively both in the US and internationally, including various European and African countries, Jones has developed a multicultural following worldwide. His experiences led him to become Music Director at the multicultural Valencia Christian Center, in Valencia, California, and later became the Artistic Director of the KJLH Radio Free Choir in the fall of 2014. In 2020 Brent Jones received the certification Gold & Platinum by the Recording Industry Association of America® (RIAA) – certifying over one million album sales of “Awaken My Love,” his acclaimed collaboration with superstar Childish Gambino. Also in 2020 he is featured in the DreamWorks blockbuster film “Trolls World Tour” (with Justin Timberlake, Anna Kendrick and Mary J. Blige). For the first time on tour in Italy with his TP Mobb, he presents himself in a 10-piece formation with a rhythm section.

Finally, the Christmas Soul festival will offer the concert at the Teatro Alighieri on 1 January from 11.30. The show will instead be entrusted to Nate Martin & SIGN (which means Singing In God’s Name), founded in 2016 in the cradle of gospel music, the city of Chicago, and for the first time on tour in Europe. A young formation, less devoted to the canons of romantic gospel and more inclined to a modern spirituality that manifests itself with groove-rich rhythms and ballads.

Robust tones, reinvigorated sound, more markedly Gospel Soul rhythms made in the USA are the elements that make up the entire personality of Nate Martin & SIGN (Singing In God’s Name) founded in 2016 in the cradle of gospel music, Chicago. Nate Martin & SIGN quickly made themselves loved in the city of Chicago for their youth, energy and passion for God. Martin has few equals in excursions and vocal timbres, and this is his new sonic guise, less devoted to canons of romantic gospel and more inclined to modern spirituality, which manifests itself with groove-rich rhythms and ballads, raising the emotional level with emphasis and with the intention of transporting the audience in each song. Tradition and modernity go hand in hand as in the best episodes and in this dimension, between the rhythmic and vocal group contributions, one of the most full-bodied gospel live sets that can be witnessed takes place. In 2020 Nate Martin & SIGN received an Eddy Award for “Album of the Year” and in 2021 a Gospel Music Choice Award for “Band of the Year”. The group traveled throughout the United States spreading the gospel through song. For the first time in Europe, this formation presents itself with a combination of religious music between traditional black spirituals and modern sonorities.