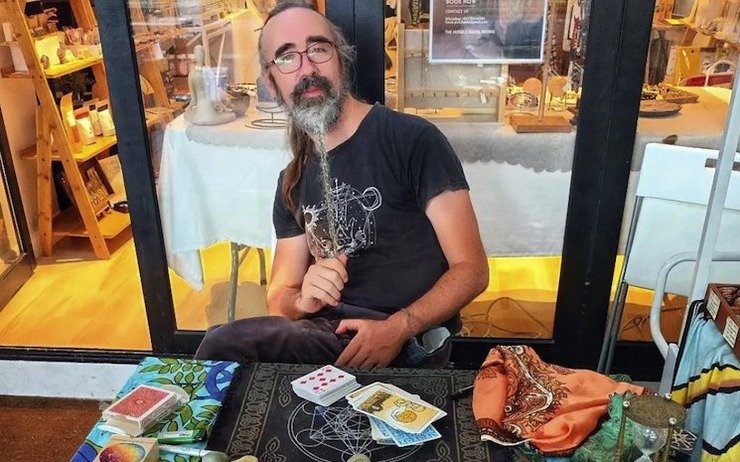 Peter carries out an original activity in Hong Kong: educator in kabbalistic tarot. The tarot is this card game popular with French final year students during inter-courses but also used by fortune-tellers for divination. Peter decided to combine the symbolism of the cards with a philosophical approach. We went to meet this Canadian like no other.

“More than a game, the Tarot is a spiritual practice”

How would you define yourself and what do you do?

I would define myself as a consultant and educator in kabbalistic tarot. I give wisdom-based tarot reading to clients and teach tarot as a path of spiritual practice.

What is your background ? What led you to take an interest in tarot?

I have had many diverse experiences. I used to work in restaurants, I was a circus performer, I was a birthday party magician. I did an interdisciplinary doctorate in philosophy, sociology and religious studies. I have travelled a lot. I’m an artist. I first discovered the Tarot when I was a child – in my father’s library. It became the common thread that connects all my different interests. I had no intention of becoming a tarot expert – I just constantly practiced and meditated on it, then finally after about 20 years people started asking me to read the cards to them and teach them how to work themselves with the tarot. Word got out, and now I’m doing what I love.

“From the Italian Renaissance to magic”

Tell us a bit about the history of the Tarot

The earliest tarot decks we know of come from the Italian Renaissance – they were commissioned, often as gifts, by nobility. These are called the Visconti bridges. They were used for playing games – yet they contained themes suggesting that an earlier tradition of oral wisdom was preserved in picture cards so that players could familiarize themselves with these ideas while playing. Later, after the generalization of the printing press, the tarot became extremely popular in France with the so-called “Marseillais” games, which were used both for games, as well as for divination and divination. In the 19th century, it was claimed that the Tarot was actually an ancient Egyptian wisdom book – as well as being an expression of Jewish mysticism – Kabbalah. This triggered a huge transformation, in which the Tarot became the center of occult and esoteric practice. Various secret societies and practitioners of magic have developed a very dense set of symbolic codes and correspondences intended to be used to access higher wisdom. In 1909, an occultist named AEWaite hired an artist named Pamela Coleman Smith to make a tarot deck that expressed secret wisdom as he understood it. This became known as the Rider-Waite deck, and it is the most well-known tarot in the world. The tarot enjoyed another renaissance in the mid-20th century, partly sparked by the mysterious and controversial “Thoth Deck” by Aleister Crowley, and now, at the start of the 21st century, thanks to the internet, the tarot is exceptionally influential and of more and more new games are being created. done than ever before. It is truly a golden age for Tarot in particular and magic in general.

“The Tarot Stimulates the Imagination”

Why do you think tarot and philosophy are linked?

The tarot has always been linked to an oral tradition which has retained certain aspects of an interconnected philosophy of nature and spirituality. There are aspects of Tarot philosophy that tie into the ideas of Plato, who held that there was a higher reality of which our lived experience was only a reflection. Some Tarot readers believe that Tarot symbols – which include astrological and elemental symbolism – can help us connect to archetypal worlds and thus communicate with spiritual realities. Other Tarot readers are more psychological – they argue that the Tarot works because it helps us identify universal patterns in the way people think and behave. Other readers believe that creativity and art inherently have some sort of magical ability to shape the world – and that the Tarot gives us access to this ability – essentially because it is like a model of the lived human world made of ‘art. There are many different perspectives in the Tarot – but they all converge on the idea that the creative imagination can give us access to wisdom – and a philosopher is, after all, a “wisdom lover”.

“Reading the Tarots allows you to think before you act”

What does tarot reading bring to everyday life?

It is when we are overwhelmed in some way that the Tarot is most useful – not as a “fortune teller”, but as a consultation with someone who has thought deeply about the different life dilemmas and possibilities. The cards themselves have the mysterious property of suggesting appropriate ways to think or act, and the reader works with the model to find a way to frame the model’s problems so that they are solvable and clear. A tarot reading should result in a feeling of clarity, confidence, courage, and even freedom. The goal for a reader is to help his client discover that he has more power to shape his destiny than he thought. A good reader will offer several ways to move forward with confidence.

What are your plans ?

I have several irons in the fire at the moment: in Hong Kong, I teach and I read at the All About You Center in Sheung Wan. I am also currently running my flagship course, the Meta-Magick Tarot which is based on my advanced occult work and which I personally lead in weekly live classes. On top of that, I’m building video courses that will be offered on an online esoteric academy called Perseus Arcane Academy. I have a book (or two) in progress and a deck of twenty-two cards to be published this year by Lesser Known Comics (based in the United States). Basically, it’s non-stop. The next few years promise to be very busy.

How can people find out more?

If you are in Hong Kong and would like to book a consultation, I am currently reading at All About You Center, in Sheung Wan. I give 90-minute reading sessions as well as weekly one-hour group lessons and a 64-hour course on 4 levels of esoteric tarot.

I’m available for group and corporate events, and if you think you’d like to read tarot at your next party, contact me at 6018-3857. (Whatsapp preferred)

Peter Duchemin: “The Tarots have been the driver of my life for 20 years in Hong Kong”

Sam Waterston and the return of "Law and Order": "It was like putting on very familiar clothes" | T...
Your weekend spiritual film with the monthly Pray: A True Story, by David Lynch
Open day at the “Maria Ausiliatrice” Institute in Luino which opens its doors to new students
Tweet
Share
Share
Pin