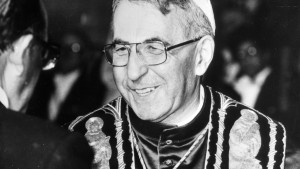 Author of “Francis the successor – the complementarity of the popes” (Téqui, 2020), the journalist Denis Lensel believes that the very brief pontificate of the new Blessed John Paul 1st played a decisive role in the opening of the Church for the Latin continent. -American.

By highlighting the person of John Paul I through his beatification, Pope Francis wanted to underline the paradoxical importance of this ephemeral pope who indicated the door to the southern hemisphere of the planet for the Catholic Church: it is the humble Pope Luciani, John Paul I, who asked the young Cardinal Ratzinger, the future Pope Benedict XVI, to represent him in Latin America by being his legate at a Marian congress in Ecuador. A theologian already renowned throughout the world, the Archbishop of Munich wanted to find out on the spot about the impulses and drifts of the “theology of liberation” then present on the Latin American continent…

Later, when he became pope, Benedict XVI discerned in this continent the pastoral qualities of Jorge Mario Bergoglio, an Argentinian Jesuit of Italian origin and of Franciscan spirituality, the future Pope Francis… Francis is the heir of Paul VI, the pioneer of the integral ecology, Paul VI, Pope Montini, himself from a Franciscan-minded family.

Through his very brief pontificate of 33 days, John Paul I first brought about a rapid transition to a new pontificate with an international outlook, that of a non-Italian pope, John Paul II, the Pole Karol Wojtyla: through his a hundred journeys around the world, John Paul II anchored the Church in its universal dimensions by bringing it into the third millennium. And, after Paul VI, he deepened the dialogue between the North and the South of the planet.

John Paul I was also the heir and successor of John XXIII and Paul VI. John XXIII, Pope Roncalli, former Franciscan tertiary, pioneer of the Second Vatican Council, he initiated ecumenical openness to the world. (Like John XXIII, John Paul I was Patriarch of Venice, the city of the West facing the East…) And Paul VI was the first great traveler pope who went to the four corners of the planet, as far as Black Africa, in Asia — with his masses in Manila and Hong Kong — and he too in Latin America, with his prophetic social message from Medellin and Bogota in August 1968.

At the end of the 20th century, John Paul I, Albino Luciani, himself from a very poor family, sensitive to the tragedy of poverty in the South of the Earth, confirmed the international social message of Paul VI in Populorum progressioa veritable charter for development, this “new name for peace”, a program for the future of the Third World, at the heart of the Church.

At the start of the 21st century, Pope Francis gave priority to the service of the evangelization of peoples, appointing at its head the young Filipino archbishop of Manila, Luis Antonio Taglé, born of a Chinese mother. And this month, he is preparing to leave for Kazakhstan, a stone’s throw from China, “the Middle Empire”… Even through the brevity of his pontificate, by confirming in a flash the direction of Latin America and the importance of the southern hemisphere of our planet, John Paul I was also an instrument of God’s Providence for the Church and humanity.

Opening to the South, the true meaning of the beatification of John Paul I