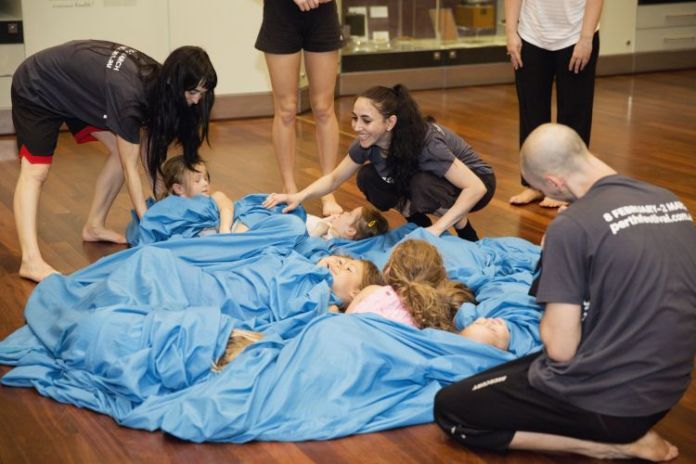 The programming of the new season of Quinta de Los Molinos Open Space starts on the last weekend of September and arrives full of proposals for the whole family, among which the shows of Aracaladanza, Jesús Rubio Gamo, Collectif Kahraba, Companhia do Chapitô or Vocal Dimension. Espacio Abierto is the first cultural center of the Madrid City Council dedicated exclusively to children and adolescents.

During the presentation of the programming of this fifth season, which has had the performance of the acclaimed group a cappella Vocal Dimensionwhich will perform on November 19 and 20 in the Open Space auditorium, Andrea Levy, delegate for Culture, Tourism and Sports of the Madrid City Council, has highlighted the benefits of some “inspiring” proposals, based on dance, music , cinema and theater to enjoy with the family, which has adaptations of classics, with workshops to play and create and with the participation of national and international companies.

The delegate has also highlighted the quality of a program that “conjugates a high creative level with fun that always has to accompany experimentation and learning” and recalled the importance for the Madrid City Council of “promoting spaces with their own personality like this one, designed by and for the youngest”.

Aracaladanza returns to celebrate the arrival of autumn with the family, and it does so with the playful-festive dance show ‘Between almonds is the game’. Under the baton of Enrique Cabrera, an own production is being cooked up that can be enjoyed the last weekend of September, together with art, rhythm and movement workshops.

And, all of this, to end with a grand finale after which an aperitif prepared by La Quinta Cocina, the center’s restaurant and solidarity space, will be offered, where the training and social and labor insertion of vulnerable young people. A tradition that dresses up as a popular and festive pilgrimage with The Fifth Harvesta multidisciplinary show around the harvest harvest festival, which will be held on September 28 and 29 in the outdoor gardens of Espacio Abierto, and poetry and delicacy, during the wonderful flowering phase, in February , with La Quinta en Flor.

Dance for all audiences, including babies

Dance will have a leading role this fall. It will not only be leitmotif and guide in The Fifth Harvestbut in October the third piece of the You dance cycle, baby?, in which Espacio Abierto challenges top-level choreographers and dancers to create a piece of contemporary dance for babies and early childhood. After the wonderful experiences of Luz Arcas and Cesc Gelabert, it is now the turn of Jesús Rubio Gamo, who will premiere on October 22 and 23 in the center’s auditorium.

Also, the program returns The Fifth In Company to accompany and promote the new project of The Lizard Dances. After several weeks of inspiration, experimentation and a lot of work throughout the summer, Leire Amonarriz and the rest of the company are bringing three family game and creation workshops to the public, throughout the quarter, with which to investigate, try and make grow his new production Hizkidantza (The dance of words), which will premiere in February, in Espacio Abierto.

Along these same lines, with a multidisciplinary proposal that bets on cognitive and functional multidiversity on stage, and without stopping revolving around dance for children’s audiences, Espacio Abierto brings the first two pieces of the Cities trilogy, which Patricia Ruz has launched; in the first, with the actor and dancer Alberto Romera and in the second, with the scenic artist, composer and trainer Nacho Bilbao.

Multidisciplinary is also the work Le Fumiste, by Dondavel, which in this case plays with object theatre, magic and the circus and which comes to Espacio Abierto thanks to the collaboration, once again, with the Festival Pendientes de un Hilo. However, the theater in Open Space starts, again, with the latest production of the documentary theater program with adolescents World Fifth (Do you want me pins?), created by Los Quintis, under the direction and accompaniment of Belén de Santiago and Ángel Perabá, from Cross Border Project. El Oroño will also feature the incorporation of such well-established companies as Lucas’s Ultramarinos, which will bring their particular adaptation of Becket’s Esperando a Godot, for children aged 5 and up, with When is Samuel coming?

Three international companies complete the stage menu: the Greeks based in Berlin, Merlin Puppet Theater, with its Noone’s Land; the lebanese Collectif Kahraba, which this time bring us, for the first time and thanks to the collaboration with the Autumn Festival, the delicate puppet show Songe d’une forêt oubliée (Dream of a forgotten forest); and the Portuguese Companhia do Chapitô, who have become a fixed and sure bet of the house and who, on this occasion, return with a hilarious new version of one of the great classics, Antígona 3 x 3.5, for a teenage audience .

This season, continuity will continue to be given to the center’s stable music and theater programs, led by the Cross Border Project (Mundo Quinta 5) and Action for Music (#HazQueSueneLaQuinta).

Likewise, the conjunction of music and cinema recovers its presence in the center’s programming, with the help of Roni di Capo and his concert Play it again (Cinema songs), which will recall the best musical moments of cinema to the rhythm of jazz, rock, blues and swing

For its part, Vocal Dimension will surprise you with an a cappella concert with a very varied repertoire, seasoned with a touch of beatbox and large doses of humour. For his part, Yuvisney Aguilar will bring the public closer to the spirituality of Afro-Cuban rhythms in the workshop The Music of the African Gods.

Continue collaboration with MICE (International Exhibition of Educational Film), which brings us several film workshops (A creative journey through the history of cinema, Learn ‘stop motion’ animation with recycled materials and Learn the secrets of horror makeup).

Children and adolescents will be able to enjoy eco-responsible workshops in the Open Space classrooms where they can learn and recover craft techniques such as hand weaving (knit with fingers), glass blowing (Learning to blow and mold glass and The magic of glass blowing) or the reuse of recycled elements to give life to automaton games (Axes and handles and Wheels and nuts). Workshops will also be given to learn how to make personalized costume jewelery (Design and create your own costume jewellery! Earrings and pendants that express your style), with a clear commitment to the “do it yourself” philosophy as opposed to irresponsible consumerism. Lastly, there will be proposals linked to experimentation and creative development, open to families and schools, such as Hexagonando.

One more year, Espacio Abierto has the talent and the gaze of a guest artist. This time it is about Martha Bozaa master of creative carpentry who not only creates a unique artistic piece for the center, “that gives shape, color and shelter to the season, and that will be dressed and inhabited with different colors and characters” -in the words of De Torres- , but will also share his talent with the children and adolescents of the #ComunidadQuinta, through various workshops that will be held from September to June.

The artistic director of Espacio Abierto Quinta de los Molinos, Beatriz de Torres, stressed that this year’s goal is to “fly several generations into the future and begin to rethink ourselves as the ancestors of the world to come and be aware that each grain of sand that we sow in this center, has a vocation to transcend beyond”. He has also taken stock of these four years of Open Space and has insisted on “the need to give the public a leading role, to think long-term and to become aware of what art and creation bring to human beings.” humans”, in addition to promoting “empathy, care and the light that we can bring to the times to come”.