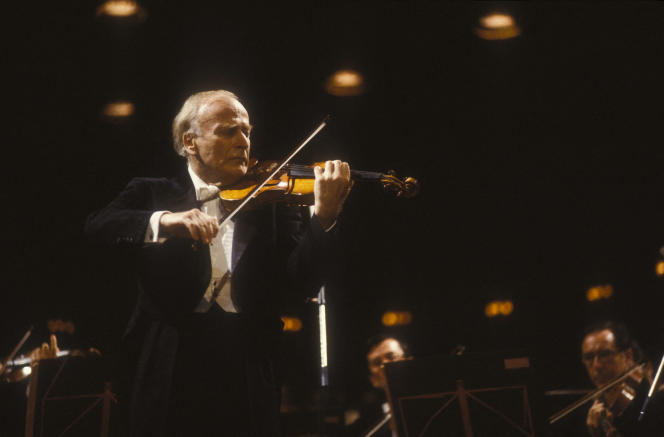 For Albert Einstein, who had heard him play the Concerto of Beethoven in 1930 in Berlin, Yehudi Menuhin (1916-1999) was “proof that God exists”. The violinist, born in New York in 1916 to a Jewish family who had emigrated from Russia and Palestine, was still the plump teenager shown in many period photos and films, used by Tony Palmer in his documentary Menuhin. A Family Portrait (1991).

A child prodigy, Menuhin began playing the violin at the age of 4, performed for the first time in public at the age of 8, in Oakland (California), near San Francisco, where his family had settled, and, a few months later, he play it spanish symphony by Lalo with orchestra. His meeting with the great violinist and composer George Enesco, with whom he comes to work in France, is essential. In 1932, he recorded in London the Violin Concerto (1910) by Edward Elgar (75), fascinated and moved by this 16-year-old musician who, everywhere, dazzles with his dreamy sound.

The portrait of some one hundred and five minutes dedicated to Menuhin by the great and prolific documentary filmmaker Tony Palmer, whose remarkable Netflix also recently released portrait of liberace, sweeps the history of the career of the violinist. In particular his concerts in the death camps, at the Liberation, in the company of the pianist and composer Benjamin Britten, and his outstretched hand to Germany (when other Jewish musicians inflexibly refused to perform there after the war).

We see him conducting orchestras (a very important activity at the end of his life), speaking perfect German and French, playing with Stephane Grappelli or with Ravi Shankar. Because Menuhin will always have had the greatest respect for Indian spirituality and music, which he will make known to the Western world by the first disc of this repertoire published on microgroove, in 1955, presented by him in an educational way.

As its title announces, Palmer’s film features the members of Menuhin’s family, his sisters, his children, his mother (who died five years after the release of the documentary), as well as his very chic second wife. , Diana, who expresses herself in a turtleneck that matches the color of the curtains in the opulent living room of their home.

We find again the subtle and mute cruelty of Tony Palmer (the one that allowed, but without malice, to appear the somewhat vain fatuity of Liberace): the director never intervenes and leaves the bridle on the neck of the camera, whereas the wife dictates to the great Menuhin what he must say and do. She corrects her memories (despite the husband’s protests), mothers him, holds forth and shoots a few arrows. A little like the fact, facing the camera, the mother of the violinist, who seems in front of her like a child in her little shoes.

Diana had been a ballerina before the war. After meeting the violinist in 1944 and marrying the violinist in 1947, she put herself at the service of his career, managing daily life and accompanying him everywhere. While they are both filmed on the set of Carnegie Hall, in New York, Yehudi Menuhin launches to him: “I think this is the first time we’ve shared the stage…” A nod to the former dancer or cowery addressed to the one who seems to love sharing the light so much?

On Netflix, a tender but merciless “family portrait” of Yehudi Menuhin