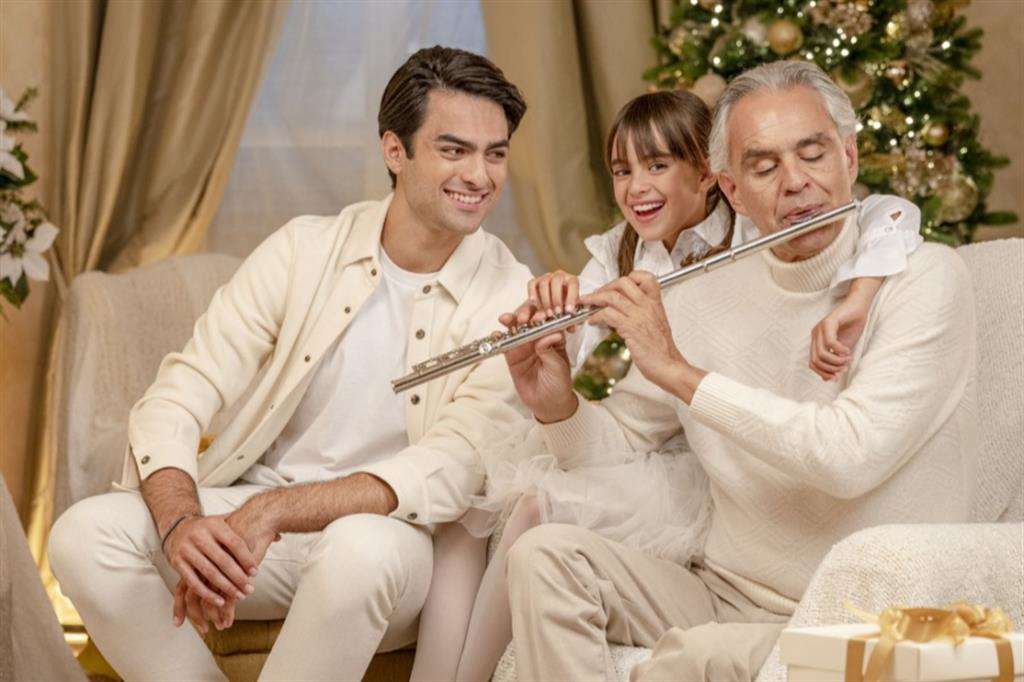 Matteo, Virginia and Andrea are dressed in soft white cashmere, alongside a fir tree full of colored balls and in the background the spiers of the Milan Cathedral. It’s already Christmas with Bocelli’s family, who yesterday presented the first Christmas album in which their voices unite to the Italian press A family Christmas (Decca/Capitol Records), which, released worldwide on October 21st reaching the top of the charts, will be released in Italy on November 25th with a special edition.

Father Andrea, his 25-year-old son Matteo and little 10-year-old Virginia inaugurated the Milan Music Week intoning from the Mondadori terrace in Piazza Duomo songs such as Happy Christmas And Happy Xmas (War is over). A taste of the great global event streaming on Youtube on December 4th Bocelli’s family Christmas, a concert event set in the snow of Gressoney which from 16 December will be broadcast by the American channel Tbn.

The birth of Jesus is at the heart of Andrea Bocelli’s Christmas musical project, as he explains together with his children in an interview with future: «There is a spiritual Christmas which is mine, and then there is the commercial one which annoys me – explains the Tuscan tenor -. Christmas represents a precious occasion to reflect on the privilege, on the prodigy (too often taken for granted) of being alive, and on that immense gift – faith – which gives us back the certainty of a future return home. But also for those who are still in search of faith, Christmas is the most propitious moment of the year to express and share the power of goodness, of the affection that is given and received, first of all within the family, alongside the people who love each other. In the magic of the Christmas spirit, we can all trace in our hearts that precious ingenuity we had as children: that propensity for goodness and sincerity that we should cultivate in every season of life”. Principles that the Tuscan tenor passed on to his children: «I think I passed on the spiritual priority of this celebration to my children through a coherent attitude, through the example that Veronica and I set for them. Reflection on the religious significance of the anniversary remains the protagonist of our family conversations throughout the day. A day that is always inaugurated by participation in Holy Mass”.

The handsome also confirms it Matteo Bocelli: «Christmas has always had a purely religious value in my house. The first thought on this day is Holy Mass, after which the day unfolds like a normal family’s Christmas: let’s have lunch together and unwrap the presents». Sweet Virginia, who has enchanted the greats of the world from US President Biden to Queen Elizabeth by duetting with dad in Leonard Cohen’s Hallelujah, reveals other details of Christmas at the Bocelli house: «It is a special holiday, because an important person is born, at the which we really owe everything. And then, it’s the day Santa Claus comes and brings presents. At home we make both the crib and the tree; in addition, we decorate some rooms: in this way we remember at all times that these are different days from the others. This year, singing with my father and Matteo, I must say that I have already felt Christmas approaching for many weeks».

Andrea Bocelli cannot fail to extend his wishes for serenity and peace to those who suffer from the many wars in the world starting with the one in Ukraine. «It will be a sad Christmas for many and worrying for everyone, I hope that music performs a small miracle and leads us to reflect on the authentic values ​​of Christmas, which are those of Christianity, which is also a philosophy that could make this earth an earthly paradise – he adds heartily -. I believe music (and all art) is a gift from heaven capable of speaking to the spirit, of making us better and – as Aristotle already said – of “changing the moral character of the soul”. Music too can be a support for development and peace among peoples, and perhaps the Christmas repertoire even more, precisely because of the intensity of the good that the specific themes of these songs are capable of transmitting. Pope Francis called the Christmas of Jesus “the feast of trust and hope”. I make the reflection of the Holy Father my own, proposing a message of trust in the human being, in his goodness and in his intelligence, in the ability to opt for the good at the right moment. I remain convinced that the largest part of humanity desires peace, non-violence». On the other hand, living spirituality, having a dialogue with one’s soul, is always a courageous gesture, adds Bocelli: «Everyone, without exception, can and must try to give our contribution, so that life finds its perfect expression. What better occasion than Holy Christmas to find inner peace and reflect on the values ​​to cultivate and the negative values ​​to abandon? This is my wish, this is what we would like to humbly remember through the album: a small musical gift from a family, for families».

Even Matteo Bocelli, who has already become an international star duet with his father in the hit Fall on me and who is preparing his first solo album, recalls the family Christmases of his childhood: «When you are little, naturally, your thoughts are closely linked to your material traditions. At the same time dad was often away for work and the thing that made me happiest was the idea of ​​having the whole family at home». And Christmas carols have always united the Bocelli family. «Traditionally in our house the background music is the album My Christmas of my father (2009). This year we will probably also add our new one A family Christmas» Matteo explains that he loved singing with his little sister Virginia and his father in particular The greatest Gift while Andrea Bocelli strongly wanted in the album Happy Christmas, already interpreted by the baritone Gino Bechi, «a song that I always heard as a child and that I never heard again».

Virginia has her own specific tastes on her favorite Christmas tunes: «There are the traditional ones that I’ve been listening to, often from my father’s voice, since I was born. Then there are the ones I listen to in church, then the ones I’ve known on movie soundtracks – he reveals –. For example The Polar Express which I loved (that’s why I insisted I could sing When Christmas comes to town). But there are also songs I didn’t know, like Away in a Manger And Do You Hear What I Hear which I found beautiful and which I still like a lot, despite the many times I had to repeat them, for the recording». The little girl also has a special thought for the less fortunate children whom she wishes for this Christmas «that they can study, that they can learn many things and also to recognize their passions and then follow them. I wish they had enough to eat and friends to joke with and a family to feel loved in. I hope they don’t feel sad, even if they lack everything I wished. Because – he adds revealing great maturity – if they are alive, if they were born, it means that every door can open, and from that door happiness can come. That’s why I wish them to know how to be optimistic, to know how to hope and to make themselves heard by adults, asking to be helped, respected, loved”.

She has already had her best gift: «I really like singing. As well as playing the piano and doing artistic gymnastics. These are things I love to do, that make me feel free. Singing with my father and Matteo was very nice. It took me a while to get used to having so many people in front of me, but basically we sing also and above all for others, so it’s right to overcome fear. What I learned about music probably dates back to before this record, to all the times I was able to listen to my father and also Matteo while they were studying. Instead, for the album, rather than learning new things about music, I understood more that it is necessary to listen, during a song, to those who sing with me; I understood that we need to be present, even with the mind, when we are making music, and know how to have fun, while we try to do something better». A baby star is born.

Music. The Bocellis tell their story: «Here is our Christmas as a family»