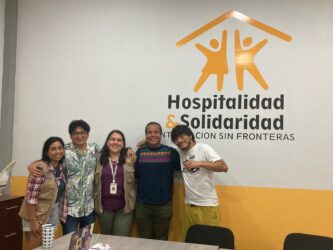 *The radio space seeks to bring the multicultural population closer to the local one, in order to avoid confrontations and tension between them.

The Hospitalidad y Solidaridad AC hostel began its second season of its radio program “Multicultural route, stories to find us”, a space coordinated by the institution, but created and carried out by people in situations of mobility.

The radio space began in conjunction with Altavoz radio in 2022, in its first season 13 episodes were completed with testimonies made by people on the move located in Tapachula, to share dignified, supportive stories built by them.

The first season was broadcast on local radio station 101.1 FM in Tapachula, on the Altavoz website, and recently on Spotify.

Nimsi Arroyo, in charge of coordinating the program by the shelter, recalled the purpose of raising awareness among the local population about the stay of the refugees themselves.

We are not looking for refugees to re-victimize themselves, the program talks about everyday aspects. For example, we talk about country issues, parties, traditions, love, movies, wishes, plans or music. The point is that the local population perceives that people on the move are exactly the same, so we try that approach and understand the differences, he mentioned.

In addition to each account of one or several refugees, a capsule called “between pulpines” was attached. Here, children and adolescents answer the same questions asked by adults, to include the diversity of views of migratory mobility.

People have found a way to express themselves, to leave their mark. They feel part of something and that excites them a lot. Sharing their tastes with people and talking about other things has comforted them, said Arroyo.

Tales, myths and legends of terror

In chapter two of the first season, the Nicaraguan Elizabeth talked about a story that her grandfather told her when she met the leprechauns.

This project started its second season this 2023, a space of 17 episodes now with a time of 30 minutes of program.

Among the topics covered are: mental health, spirituality, volunteering, Independence Day, education and other daily topics.

At the same time, other sections were added, such as a cultural dictionary, a capsule to explain an everyday phrase or word from your country.

With the added time, the space also seeks to support people on the move within Tapachula to guide them and transmit information about organizations such as Doctors Without Borders or the Jesuit Service.

In the first week of 2023, families from the Laureles subdivision near the offices of the Mexican Commission for Aid to Refugees (COMAR) protested in the center of Tapachula, with the purpose of relocating the institution.

The and the inhabitants They explained that there are no conditions to house so many migrants in one place, which is why it affects their daily lives.

For his part, the Collective for Observation and Monitoring of Human Rights in the Mexican Southeast (COMDHSM) It has expressed its concern on different occasions, given the lack of clarity in the INM’s practices regarding immigration regularization procedures, as a constant tension is generated between migrants with international protection needs on the southern border of Mexico.

The foregoing, when confronting the federal government’s discourse on promoting orderly, safe and regular migration. For example, on Friday, March 11, 2022, as part of the visit of Andrés Manuel López Obrador, President of Mexico, to Tapachula, the INM mobilized people with the promise of buses that would take them to other cities in the country and grant them a Visitor Card for Humanitarian Reasons (TVRH).

Meanwhile, people in migratory mobility have denounced on different occasions the lack of compliance with the established times by the INM and COMAR, to advance in their refugee application processes, which leads them to physical, emotional and economic.

The Mexican Commission for Aid to Refugees (Comar) announced that, until December 2022, 118 thousand 478 people They requested recognition of refugee status in Mexico, of which 76,239 began at the Tapachula office in Chiapas.

Other Comar offices and representations were: Palenque in Chiapas with 7 thousand 967Veracruz 7,764, Tabasco with 5,728 and Baja California with 3,416 applicants.