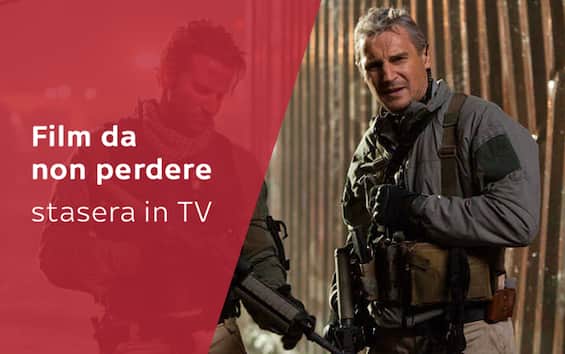 Here is an overview of the films that will air tonight on TV on Sky channels. All Premières and Libraries on first pass are also available on Sky On Demand and Sky Go.

Film remake of the well-known US TV series, with Liam Neeson And Bradley Cooper.

Steven Seagal in an action set in Thailand. An ex-soldier martial artist needs to find a girlfriend.

Drama to see tonight on tv

Silvio Orlando in the adaptation of a novel. A child pursued by the Camorra hides in the house of a mild-mannered professor.

Meryl Streep in an intense drama by Sidney Pollack, with Robert Redford.

Silvio Orlando in the adaptation of a novel. A child pursued by the Camorra hides in the house of a mild-mannered professor.

Down in the North, 9.15pm on Sky Cinema Collection

Kad Merad in one of the most famous French comedies of recent years. A postmaster is transferred to the seemingly inhospitable north of France.

Joseph Gordon-Levitt and Seth Rogen in a touching comedy about a boy who discovers he has a serious illness.

Fabio De Luigi And Micaela Ramazzotti protagonists of the story. A man denies his daughter’s existence to continue a relationship.

Anya Taylor-Joy in a cinecomic linked to the Marvel universe of the X-Men. Five kids with powers have to escape from the institution where they are locked up.

Grand finale of the Harry Potter saga, with the wizard’s adventure drawing to a close.

Fantastic Beasts: The Crimes of Grindelwald, 21:00 on Sky Cinema Family

Second film in the prequel saga of the Harry Potter universe, starring Johnny Depp and Jude Law in the cast.

Italian remake of the famous series “This is us” with Lino Guanciale.

TV series with Nathan Fillion, who plays a man with dreams of becoming a cop in Los Angeles.

Fabio Fazio and Luciana Littizzetto in a program of interviews, between culture and social issues passing through politics.

Tom Cruise in the story of Barry Seal, a smuggling pilot contacted by the CIA to carry out a mission.

Massimo Giletti leads a container of current affairs, politics and social issues to be explored.

The World Championship restarts, returning to the areas of the Americas.

Corrado Guzzanti presents a gallery of his most beloved characters.

"Amma's Way
Before Avatar 2, here are 8 Na'vi words you need to know!
The rediscovery of pilgrimages on foot in a new TV program
Tweet
Share
Share
Pin